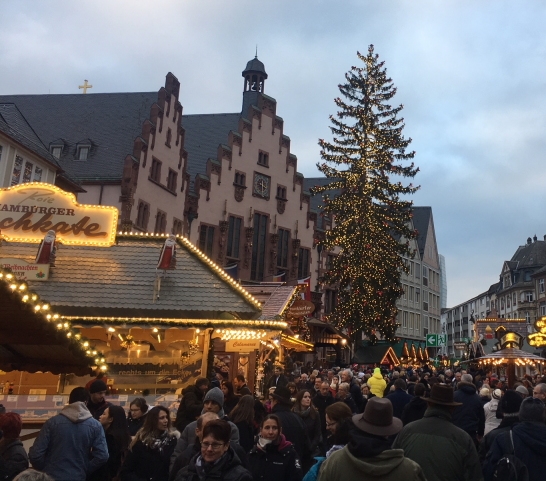 Although Frankfurt is a major business hub with towering buildings and offices of over 300 major banks and the Frankfurt stock exchange, it’s also one of the most popular tourist destinations in Germany. There are beer gardens, street markets, bistros, fashion boutiques, and candy stores. It’s the birthplace of Johann Wolfgang von Goethe, Germany’s Shakespeare, whose former home is now the Goethe House Museum, a popular tourist destination. With Frankfurt’s strategic location, getting around to other parts of Germany or going to other major European cities is easy. Frankfurt Airport is one of the world’s busiest international airports and Frankfurt Central Station is one of the largest rail stations in Europe and the busiest junction, with 342 trains a day to domestic and European destinations.

Although Frankfurt has an old reputation for being cold and boring, it’s a city with a rich history, a place with modern immigration issues, and a spot that has a thriving LGBT community (same-sex marriage became legal in Germany on October 1st, 2017).

Frankfurt, formerly known as the Free City of Frankfurt, was a city state for nearly five centuries, and was an important city of the Holy Roman Empire; however, it lost its sovereignty in 1866 because Prussia annexed it as a result of the Austro-Prussian War. Prussia is considered the legal predecessor of the unified German Reich (1871–1945) and as such a direct ancestor of today’s Germany. During World War II, the Allies dropped over 12,000 tons of explosives on the city, destroying parts of it. After World War II, the city was part of the occupied American Zone. In 1949, Frankfurt was the proposed temporary capital of West Germany and a parliament building was constructed, but never used for its intended purpose because many feared Frankfurt would be accepted as the permanent capital, thereby weakening West German support for a reunification with the east and the eventual return of the capital to Berlin. Bonn was ultimately selected as the West German capital (1949-1990). In the 1970s, Frankfurt developed a state-of-the-art public transport system that links city and suburbs.

In 2015, Germany decided to open its borders to immigrants because its population was on the decline and many immigrants were fleeing war and poverty in the Middle East and Africa. The number of people with an immigrant background in Germany rose 8.5% to a record 18.6 million in 2016. In part because of refugees, Frankfurt is known as the city without a majority, with more than 50% either non-German, German citizens born abroad, or Germans who are the children of immigrants.

Turkish migrants are the largest non-German minority in Frankfurt, accounting for around 13% of the population. With Frankfurt’s LGBT-friendly environment, there’s concern that with an influx of people from conservative countries that culture shock may be difficult to shake. For example, in Turkey, where many migrated from, a German LGBT film festival was banned by Turkish authorities citing public safety and LGBT pride parades have been banned in Istanbul for the last two years. As Germany continues to grow and Frankfurt continues to diversify, it may have to spend a greater amount on public campaigns to soften some immigrants’ staunch beliefs because they may have only learned from conservative countries that have suppressed LGBT speech.

Frankfurt is very LGBT-friendly. It has a Gay Christmas Market, located in the popular Friedrich Stoltze Square, where gifts are sold by or made by members of the LGBT community. Most gay bars in Frankfurt are located close to each other in the downtown Innenstadt area. Zum Schwejk is a gay bar that has been in business for more than 25 years. It offers a friendly atmosphere and quirky décor. Its bartenders are friendly and speak English. Bar Central is a gay-friendly lounge that has themed nights. Babylon Frankfurt is a fun gay bar with a mini-stage for performances. It offers karaoke on some nights. Lucky’s is a gay bar that has friendly bartenders and offers a relaxing environment to unwind. It can be smoky, however, as cigarettes are not prohibited in bars. (Lucky’s is located in an entrance to the Westin Grand Frankfurt hotel.) Autograph’s Bar offers a relaxing environment for the gay community and serves a range of beers, wine, sparkling wine, and whiskey. It showcases an impressive collection of autographs on its walls. Switchboard is a gay bar where customers can relax with a drink and meet others in a friendly environment. Zur Hex Fun, run by local celebrity “Mother Charlotte,” is decorated in red and plays German tunes. Birmingham Pub is a gay-friendly pub and sports bar that offers late-night food and a range of beers. With all of the adventures Frankfurt has to offer, it should be on your list of places to visit in Europe.