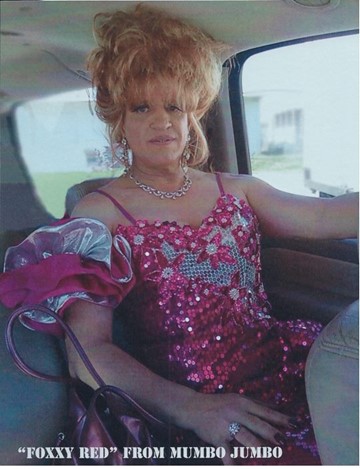 Foxxy Red was the name of the first character I played in a movie. About ten years ago I decided that an easy way to come out would be for me to play female parts in movies. I thought it was brilliant because people could get use to me as a female and not be threatened by me changing my gender. I saw an audition that was casting in New Orleans for a transgender woman. I went to the audition and hit it off really well with the director.

I got the eight-page part along with a minute and a half monologue. We shot the movie in Alexandria Louisiana. They started with the monologue, bad decision. Note, if you are a director and you have a new actor never start with the hardest scene for the actor. Nerves were bad, I had trouble stringing two words together during the monologue. After the second scene everything calmed down and it went very smooth for the rest of the shoot.

After that movie I thought this might actually be a way for me to come out. So, I applied for another movie. It was for a featured extra, for those who don’t know it’s someone who appears on camera and is noticeable, but you have no lines, you are background.

I downed one of my best dresses and went to a cattle call. A cattle call is where they do a large casting for extras and others. Casting liked me and had me meet with the director. Although he didn’t think I looked female enough. Nice call for someone one with gender dysphoria. It killed my spirit; I mean how could I ever look female enough. So, I went back into hiding. My secret was once again safe. Although I did have the above picture and showed it sparingly to a few people over the next eight years.

I just want to blend in most of the time and not stick out. I am doing a much better job with this lately. I think most older transwoman have a hard time dressing age appropriate which makes them stick out. I think many, like me, never had a female young adulthood but our mind is locked into a twenty-year-old look.

I have to admit in those years I realized that I looked more like a drag queen than a woman. I think we internalize hyper-femineity to some extent, which is the reason for the drag queen comment. I do love drag queens but have to admit that I am not one. I dressed twenty years younger than I actually was. My makeup looked like a guy did it. I mean nothing looked normal. However, with the help of my wife I am starting to find a balance. While I still do like younger people’s clothes, I am getting a style that is more age appropriate. Which helps me be seen as just another woman.

Which is how I really see myself. I wish people could experience how I feel because they would start to understand me and other transgender women. I always felt conflicted through out my life with who I was supposed to be and how I saw myself. However, it took forever to figure it out because being transgender wasn’t even on my radar. As always peace, love and light. Sophie