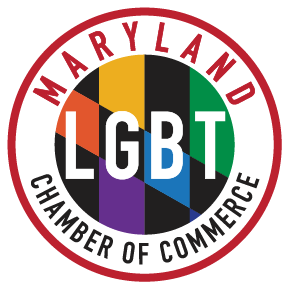 The Maryland LGBT Chamber of Commerce held its first annual “LGBT+ Champions Awards” dinner on Thursday, April 25th at the Lord Baltimore Hotel. Over 150 LGBT professionals and allies came together to recognize and honor seven outstanding people who have made significant contributions to the LGBT community. The evening was opened by Chamber co-founders Betsy Cerulo and Dave Imre, and was followed by inspiring remarks from the president and co-founder of the National LGBT Chamber of Commerce (NGLCC) Justin Nelson and Maryland’s first openly lesbian state senator, Mary Washington.

The young LGBT chamber, just wrapping up its second year of programming, has grown to over 150 members and held over 45 networking and educational events in the past two years. in 2018 the Maryland LGBT Chamber was recognized by the NGLCC as its “Rising Star Chamber of the Year.” The all-volunteer organization has built a strong foundation as an influential change-maker and supporter of LGBT businesses across Maryland with focuses on fair competition in business, workplace protection, networking, and collaboration.

Corporate Partner of the Year was Stacie M. Rinker, a vice president of M&T Bank

Community Leader of the Year was awarded to Franklin N. McNeil, Jr., a vice president at PNC Bank.

Member of the Year was handed to Lee Johnson-Lowe, director of sales, at Lord Baltimore Hotel.

The celebratory evening closed out with cocktails and dessert in the gorgeous historic lobby of the Lord Baltimore Hotel.

As the Chamber launches into its third year during Pride month, it is expanding across Maryland, hiring a part-time executive director, and expanding their board. The newly elected slate of board members transitions President Joan Cox into the immediate past president advisory role on the board while Tom Koerber moves into position as president, Terri Hett as vice president, April Rancier as secretary, and Keith Snyder as treasurer. Board members-at-large include: Ricky Adams, Wil Graham, Winnie Hull, Gavriel Legynd, Nancy McDonald, Darlene Niccoli, and Carlton Smith. Look for the Maryland LGBT Chamber of Commerce booth at many of the Prides around Maryland this June and check their website of upcoming events at Mdlgbt.org.