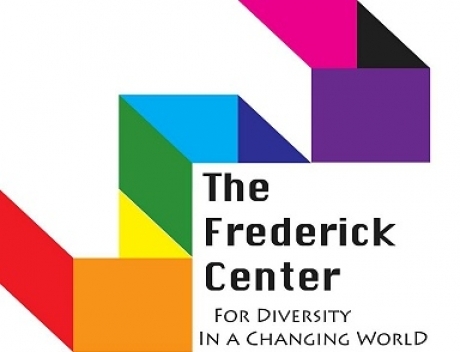 Over 5,000 people attended the fifth annual Frederick Pride on Saturday, June 25th, presented by the Frederick Center. Over 70 vendors – including non-profits, churches, small businesses, artists, and Frederick County agencies – set up along Carroll Creek Linear Park. In other parts of Frederick, business owners posted “Frederick Pride Ally” decals in their shop windows, indicating a safe space and a special discount for Pride attendees. From the ecumenical church service before the festival began, to the after-party at The Lodge in Boonsboro, Maryland, Frederick Pride went strong all day long.

2016 was Michelle Toulotte’s second year as volunteer coordinator. She and the rest of the Pride Committee usually start planning for the following year’s festival in January or February. Approximately 150 volunteers crewed the entrances, information booths, and other key spots over the course of the day.

“One of the things I really love hearing from volunteers – and every time I hear it, it always surprises me – is to have somebody say to me, ‘This is my first year volunteering, my first year at the festival, but I had a blast and I want to come back next year and I want to volunteer. How do I get more involved with everything?’” Toulotte said. “It means a lot to know that people enjoy being a part of Pride so much that they want to get more involved.”

Toulotte attended her first Frederick Pride in 2013. “The moment I got there, there was just this wonderful feeling of community and open acceptance,” she said. “Even though we’ve switched locations and we’ve grown from year to year, I love the fact that that feeling has continued. And I hope that that’s something we’re always able to capture every year that we do this.”

Kate MacShane, a clinical social worker, moved to Frederick in September 2015. This year marked her first time at Frederick Pride. “I saw it as both an opportunity to participate in the community and an opportunity to have thoughtful conversation,” she said.

MacShane’s psychotherapy practice is LGBT-affirming, focused on the mental health effects of gender-based oppression. “Everyone’s gender story is very nuanced and complex,” she said. “I wanted to make a space for people to think about their gender in a safe and supported environment.”

She encouraged the Pride attendees who stopped by her booth to place small sticky notes on a two-by-three foot laminated poster that read “Who Are You? Understanding the Spectra of Sex, Gender, and Sexuality.” There were four categories: natal or assigned sex, gender identity, gender expression and sexual and/or romantic attraction. Rainbow-colored sticky notes covered the entire poster by the time Pride ended at 7 p.m.

“Frederick, you’re beautiful,” MacShane wrote in the caption of her picture of the poster.

She hopes the people who interacted with her and marked their spot on the poster walked away feeling empowered to have conversations about gender and sexuality with their fellow attendees.

On the other side of Carroll Creek, Netasha Johnson hung huge, colorful flags and arranged dozens of tie-dyed t-shirts. She first learned about the Frederick Center when a friend handed her a flyer about volunteering at Pride. Now in her second year as Frederick Pride Merchandise Lead, Johnson uses her business acumen to choose which items to stock in the “Pride Shop.”

As for Johnson’s favorite part of Pride, she articulated the joy she witnessed over and over on Saturday: “The happy faces within the crowd, in peace. Being able to support my friends (both old and new within the community) and to show that they don’t have to be scared to be who they are.”

To learn more about Frederick Pride and the work of the Frederick Center, visit thefrederickcenter.org.