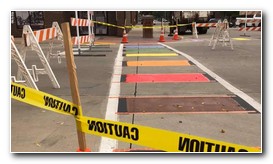 Ames, Iowa – The Trump administration has ordered the city of Ames, Iowa, to remove its newly installed rainbow crosswalks. Ames is the home of Iowa State University, whose students make up about half the city’s 66,000 people. The rainbow crosswalks had been installed this year to commemorate Pride month.

In a letter to the city government, the Federal Highway Administration (FHWA) charged that the crosswalks were in violation of federal rules. The letter ordered the City of Ames to remove the rainbow crosswalks, as they fail to comply with federal traffic-control standards. Federal rules dictate that crosswalks must only use white paint, FHWA said. “Crosswalk art has a potential to compromise pedestrian and motorist safety by interfering with, detracting from, or obscuring official traffic-control devices,” the FHWA letter read. “The art can also encourage road users, especially bicycles and pedestrians, to directly participate in the design, loiter in the street, or give reason to not vacate the street in an expedient or predictable manner. It also creates confusion for motorists, pedestrians, and other jurisdictions who may see these markings and install similar crosswalk treatments in their cities.”

According to Ames City Attorney Mark O. Lambert, the federal government does not have jurisdiction over the roads where the rainbow crosswalks are placed. He also said that they were unlikely to face monetary penalties for keeping the Pride crossings in place. Lambert informed the city’s mayor and city council of his findings in a memo. The council decided simply to ignore the Trump administration. (Seattle Gay News – Mike Andrew at sgn.org/sgnnews47_40/page1.cfm)