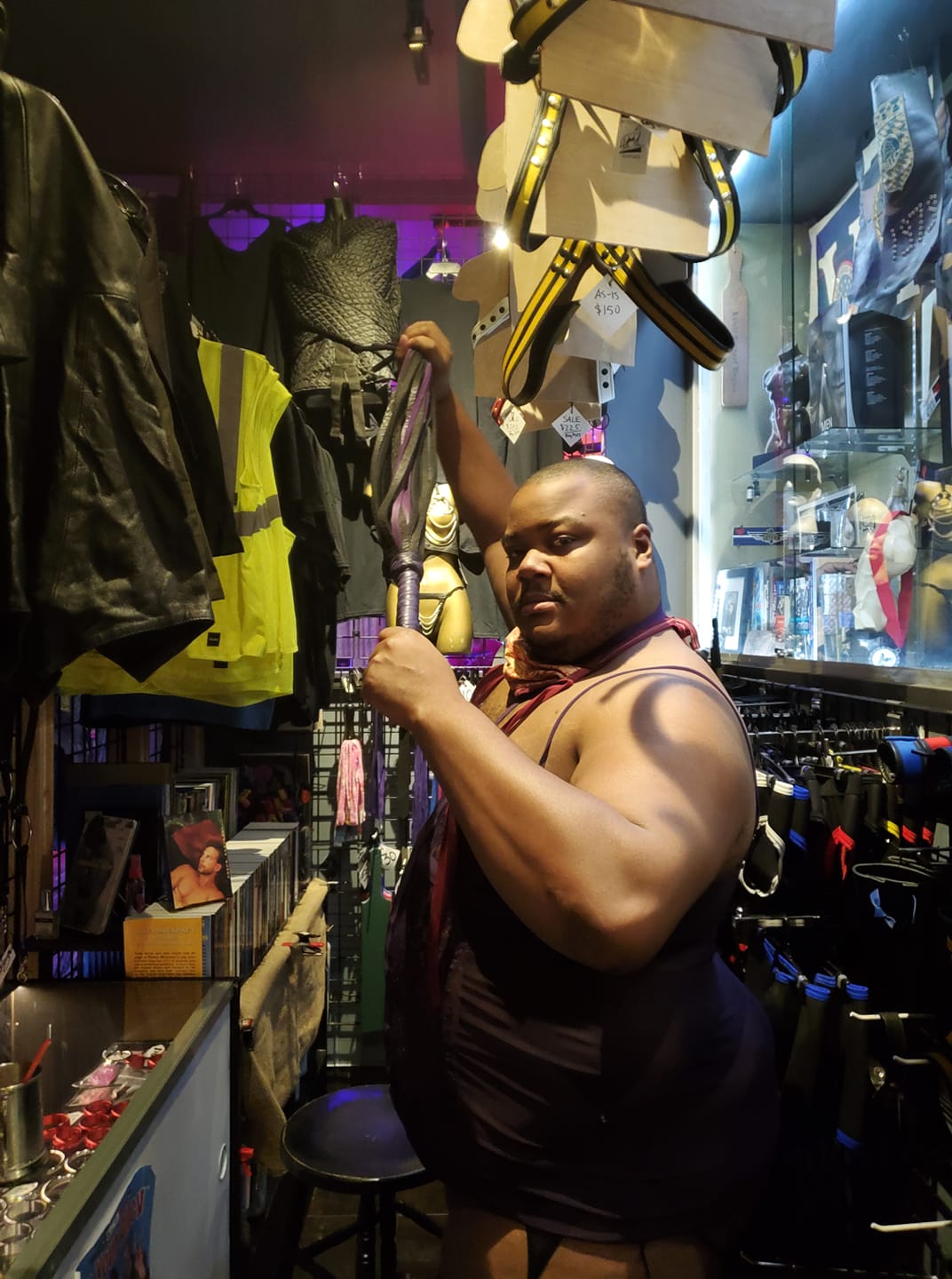 Anyone who is a member of the LGBTQ+ community has been bullied at some time in their lives. It usually happens in grade school. We like to think that as we grow older, we become more mature. The last few years have shown that bullies do not have to be school children. They can even hold the highest office in the land.

I have been friends with Savage-Onyx for several years now. His smile can brighten up any room and his playful energetic spirt can quickly cheer up anyone who meets him. He does not fit the stereotype of the typical leather man. In fact, his fetish is not just leather. It is also lace. In the last few months my admiration and respect for him has grown as he has been forced to publicly stand up to bullies on social media.

Savage-Onyx was born in upstate New York in the small town of Watertown, New York. He moved from Waldorf, Maryland to Baltimore “for love.”  I asked him about his Facebook page where he describes himself as a “body positive, bi-sexual switch collared boy.”  He said that was an accurate description except for the collared boy part. He is currently single and not a collared boy, but who knows what the future will bring.

Savage-Onyx discovered the leather community about five years ago when he walked into the Green Lantern bar in DC one night when ONYX was having a bar night. In 2017 he pledged and became a member of ONYX Mid-Atlantic (a national fraternity for gay and bisexual men of color in the leather lifestyle). ONYX pledges are required to work at the large ONYX gear show benefit during Mid-Atlantic Leather Weekend in DC. His first visit to MAL found him going around the ballroom with a leather boot and collecting charitable donations. It was his first time at a big leather event, and he knew he had found his family.

Growing up, Savage-Onyx said that he would watch award shows like the Oscars and the Emmys. The women would get lots of notice for their sexy and colorful outfits while the men were all in boring black tuxedos or dark suits. He wanted to wear something sexy. He thought, “Why not?” He started with a mesh shirt and added laughing, “It is cheaper than leather.” When he first moved to Baltimore, he had his leather vest stolen out of his car and didn’t have the money to replace it. He discovered that he could feel just as sexy and powerful in lace. It gets him noticed!  “When you command attention, that’s power.”  Not everyone supports his look, but he finds strength in his ONYX brothers and his leather family. “Some days are harder than others, but it is what I love.” People try to question his charter, but the problem is really with his wardrobe not his charter. That is their problem, not his. Savage’s advice for others is: “Don’t be afraid to be yourself. Embrace it!”

He has other kinks as well: needle play, impact play, water sports, fire play, CBT, and electro play. That sounds like someone who fits in well at the Eagle to me!

This has not been an easy year for anyone. Savage-Onyx is working remotely in his full-time job as a conference planner and is relieving the stress of 2020 by enjoying the freedom of being able to be himself at the Baltimore Eagle. He only wishes that he would have discovered the leather community sooner. If he had, he might be further along in his leather journey. He does not rule out the idea of running for a leather title someday so that he can teach others that it is okay to be true to yourself. Savage-Onyx is looking at a regional title like Northeast Person of Leather.

For now, you can find Savage-Onyx at the Baltimore Eagle being Fearless and Fabulous!