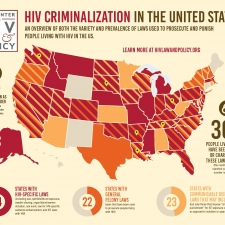 Memphis, TN – Robin Lennon-Dearing writes in The Conversation and reprinted in Edge Media Network that despite the fact that HIV is now a treatable medical condition, the majority of U.S. states still have laws on the books that criminalize exposing other people to HIV. Whether or not the virus is transmitted does not matter. Neither does a person’s intention to cause harm. A person simply must be aware of being HIV-positive to be found guilty. These laws are enforced mainly on marginalized people living in poverty who cannot afford lawyers. The penalties — felony convictions and being placed on sex offender registries — are severe and life altering. It is difficult to know exactly how many people are affected by HIV criminal laws, since a central database of such arrests does not exist. The HIV Justice Network has collected a partial list of 2,923 HIV criminal cases since 2008 based on media reports.

In 1981, the U.S. Centers for Disease Control and Prevention reported the first cases of what later would be called acquired immune deficiency syndrome, or AIDS. In 1983, scientists discovered the retrovirus that causes AIDS and named it the human immunodeficiency virus, or HIV. In 1994, AIDS was the leading cause of death for all Americans ages 25 to 44. Medical treatment for the disease was in its infancy. Both factors fueled the public’s fear of being exposed to AIDS. A diagnosis seemed like a death sentence. The 1988, Ronald Reagan’s Presidential Commission on the HIV Epidemic recommended that states establish criminal penalties as a way of deterring people with HIV from engaging in behavior likely to transmit the virus. The 1990 Ryan White CARE Act, which provided major funding for HIV services, required states to certify they had adequate laws in place to prosecute individuals who knowingly exposed another person to HIV. Today, these laws are on the books in 37 states.

From the outset, experts across many disciplines voiced concern about the effectiveness of using punitive criminal laws as a way of deterring the spread of HIV. Indeed, HIV criminal laws have backfired from a public health perspective. A 2017 study found people living in states with HIV criminal laws are less likely to get tested and know their HIV status than those in states without HIV laws. Stigma and fear of prosecution discourage people from seeking information or help. This lack of knowledge is significant because pharmaceutical treatments, beginning in 1996 with highly active antiretroviral therapy, or HAART, have steadily transformed HIV into a chronic manageable condition. Sentences for violating HIV exposure statutes are comparable to sentences for vehicular homicide and can be as severe as life in prison. A 2017 analysis of 393 convictions in Arkansas, Florida, Louisiana, Michigan, Missouri and Tennessee found the average sentence for an HIV-related crime was 92 months — or nearly eight years in prison. Bipartisan support is needed to replace existing laws with proven public health interventions. (Edge Media Network & The Conversation Robin Lennon-Dearing, Associate Professor of Social Work, University of Memphis at https://www.edgemedianetwork.com/story.php?ch=health_fitness&sc=hiv_aids&id=309155&spreading_hiv_is_against_the_law_in_37_states,_with_penalties_ranging_up_to_life_in_prison)