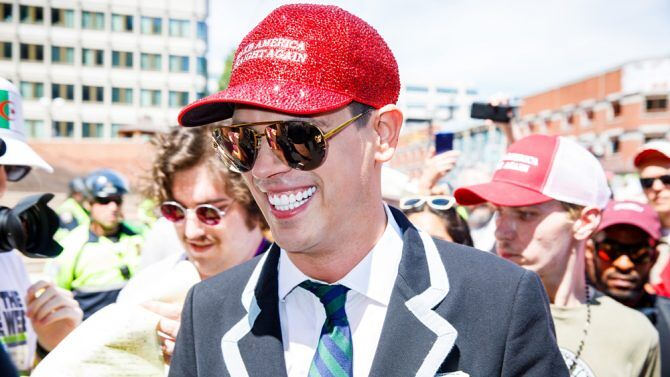 State College, PA – “Ex-gay” activist Milo Yiannopoulos took his side show to Penn State Wednesday, November 3 for a “Pray The Gay Away” ceremony. The event was hosted by the controversial student group Uncensored America, which was created last year “to empower young Americans to fight for free speech in order to make American culture free and fun again,” according its website. According to the event’s page, the “ex-gay global political sensation” was to talk about everything from free speech to conversion therapy to hair style. Tickets ranged from $15-$55.

Many students and faculty have voiced their opposition to Yiannopoulos speaking on campus, but school officials say First Amendment protections prevented them from canceling the circus act. Students protested in large numbers, despite school officials encouraging them to stay home, saying a protest “will only ensure the national attention a provocateur craves.” A joint statement signed by Penn State Vice President for Student Affairs, Damon Sims; Vice Provost of Educational Equity, Marcus Whitehurst; and Vice President and General Counsel Steve Dunham read, “Instead, if you oppose bigotry, misogyny, transphobia, and anyone who is determined to make their living by dividing us, make that opposition known by uniting against Yiannopoulos in the most effective way possible — by ignoring him.

Milo announced he was “ex-gay” and “sodomy-free” back in March, saying his husband, John, whom he married in 2017, had been “demoted to a housemate.” In August, he announced he had COVID-19 and was being treated with ivermectin. He is currently preparing to open a conversion therapy clinic for men Florida. (Queerty – Graham Gremore at https://www.queerty.com/sodomy-free-milo-yiannopoulos-offering-pray-gay-away-services-college-campus-now-20211028) (Editor’s note: Milo will be in Baltimore on November 16 along with Steve Bannon as featured speakers at a protest organized by the rightwing Catholic news outlet St. Michael’s Media. The group is protesting a meeting of the US Conference of Catholic Bishops in Baltimore at the same time. Federal courts rejected on free speech grounds the City’s effort to cancel the event.)