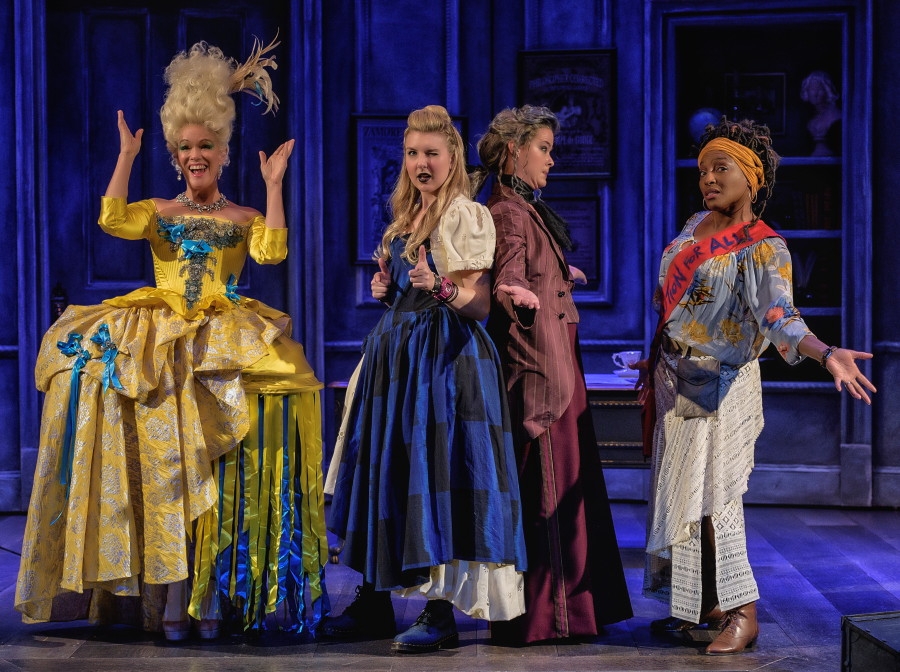 The French Revolution with a feminine Bent

Picture it: Paris, 1793. The Reign of Terror rages on as four women search for the right words and actions to ensure their impact on a world full of conflict. No, this is not the History Channel’s latest reincarnation of The Golden Girls, but Everyman Theatre’s bold, brave, blisteringly funny play The Revolutionists. Running from December 6th to January 7th, this work from playwright Lauren Gunderson takes audiences on a revolutionary journey about feminism, legacy, and standing up for your beliefs. Told from the point of view of Queen Marie Antoinette, assassin Charlotte Corday, playwright Olympe de Gouges, and Caribbean spy Marianne Angelle, audiences learn how and why these women’s lives end on the chopping block and what resonates with us today. Baltimore OUTloud recently chatted with director Casey Stangl and actress Beth Hylton, who plays Marie Antoinette.

Frankie Kujawa: What can audiences expect from this performance?

Beth Hylton: Hilarity, with sadness sometimes ensuing. I think Casey really said it well. It’s a very funny play and there are a lot of surprises in it. It starts as this madcap caper about the French Revolution, and there’s a lot of heart to it. The four women are really drawn beautifully with a lot of details. And that provides us with a lot of heartful moments for the characters.

FK: Casey, what drew you to this project as a director?

CS: Well a couple of things. It’s great writing. Four women characters, you don’t often get to see that, especially with scenes that are exploring power for women and equality for women. Aside from Marie, the other three characters are what I call “footnotes in history.” Charlotte Corday and Olympe de Gouges are actual historical figures that we know nothing about. The fact that it’s usually men that write history and men who tell stories – that’s a big theme in this play. To reclaim this history and retell it from the point of view of these women. I was also drawn to this production because of Everyman Theatre’s resident acting company and being able to do this play with three company members, and one who is familiar with everyone else. To do this with actors who have an existing relationship, and an ease, is very rare. It’s rare to find an ensemble like Everyman in our country.

FK: Beth, in your own words can you describe your version of Marie Antoinette?

FK: What makes this piece so significant to you both, considering the nation’s current climate?

CS: It has a lot to say. Lauren Gunderson began work on this play prior to last year’s election. So, it has just grown in relevance as far as the idea of “What do we do when we live in a time where we disagree with our government?” We feel marginalized and we feel harassed and we feel like our basic rights and way of life are being threatened. “What do we do in a society that’s going just a bit crazy?” Our play takes place in 1793, during the Reign of Terror. And with the current polarization, where we just scream at each other in our country, this feels particular to what our play is dealing with. There is a very female bend to it – the reclaiming of women’s history and telling stories from the times of the past from a female perspective. Olympe – the person who all these other women orbit around – wants to know why can’t revolutions be kind and creative. And, I feel that if women were in charge they would be kind and creative. This play beckons the question, how have women been silenced and oppressed and how do we break out of it and find solidarity and sisterhood with each other and the outside world?

BH: When we first read the play, as a company, it was the day after the Women’s March in Washington, DC, and many of us participated. The play just levitated. It feels as if Gunderson wrote this play for just this time. It feels so strangely current, and I can’t tell you how many times as actors, we stop and say we can’t believe that we get to do this play right now. It becomes a community exercise on conversation. There’s also another thing, and it’s not necessarily feminist-themed, but right now the arts are being threatened. How the arts and the telling of stories is valuable to us and our culture. That’s being threatened in today’s world. And to be in play written by women, with three other women, being helmed by a woman – it’s a very woman empowered room. And that’s always a delight to play as a woman artist.

For more info on The Revolutionists, visit Everymantheatre.org.