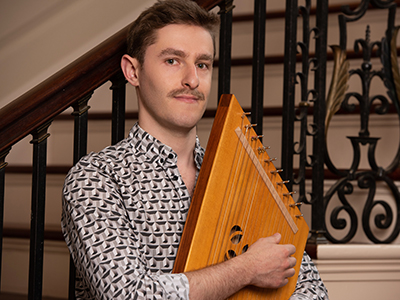 When Niccolo Seligmann comes across an obscure folk instrument he’s never seen before, he can’t help but pick it up and play! Having earned a degree in viola da gamba performance from Peabody Conservatory, he plays over 20 acoustic instruments, including medieval fiddle, and is apprentice to master luthier Ken Koons. Seligmann is a member of various medieval, traditional, and early music ensembles, including the Jefferson Baroque Orchestra, with whom he is premiering his original new-baroque opera, Minerva, based on Handel’s arias. He has toured North America and Europe, performing in venues that range from the Kennedy Center to the inside of a 2,000-year-old California redwood tree. His work unites historical and experimental music, utilizing both acoustic and electronic instruments to create a completely unique listening experience.

Sponsored by Van and Linda Hubbard & Stephen and Tanya Spano