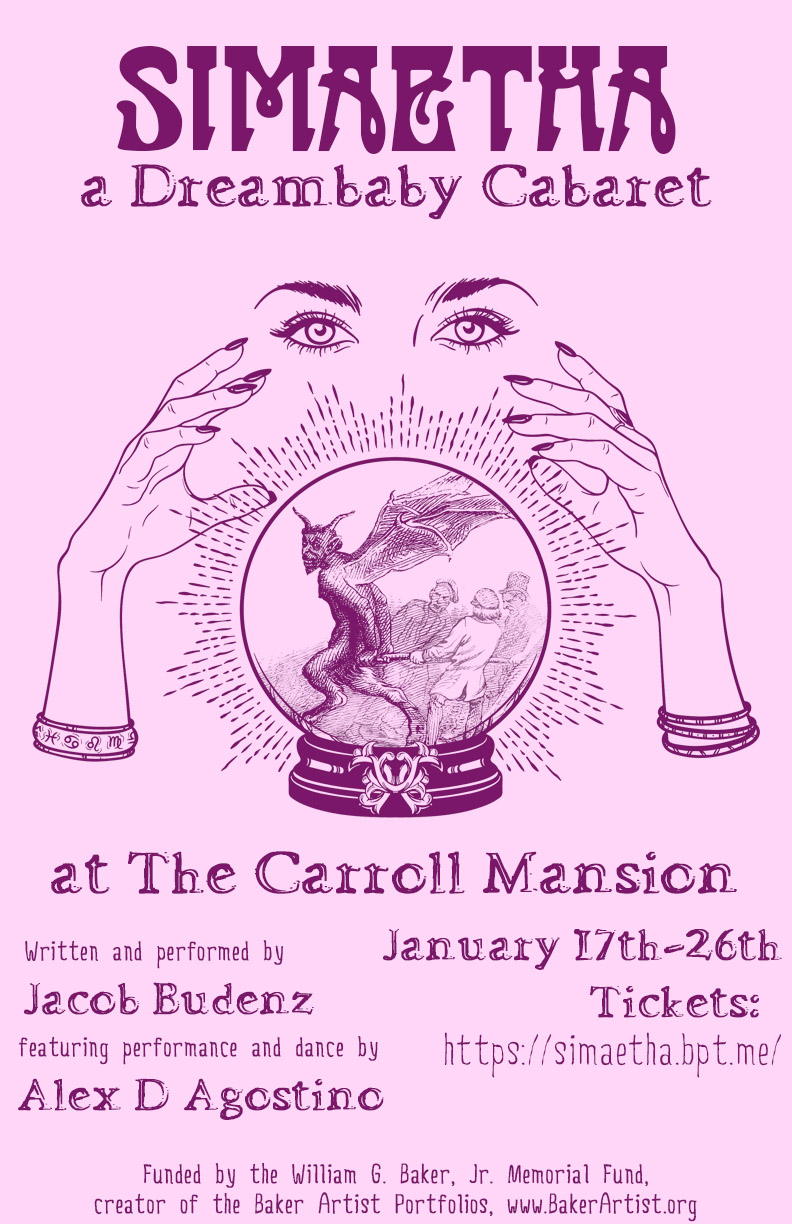 SIMAETHA (pronounced sigh-mee-thuh) is an experimental witch cabaret written and performed by Jacob Budenz (a.k.a. Dreambaby), featuring dance and performance by Alexander D’Agostino. Through poetry, storytelling, music, and ritual, the show weaves together real and conjured memories, using mythology to rewrite identity. Simaetha, the angry witch in Idyll 2 by the Ancient Greek poet Theocritus, becomes the inspiration for an ageless, genderless creature navigating the seductive and double-edged gifts of demons, family ghosts, lovers, legends, and lonely yearnings of immortality. At once meditative, surreal, and darkly funny, SIMAETHA: a Dreambaby Cabaret explores myths invented and reimagined through theatrical vignettes, tied together by haunting songs in Dreambaby’s signature witch cabaret style, raw dance performances by Alex D’Agostino, and various rituals that implicate the audience in the story.

JACOB BUDENZ is a queer writer, multi-disciplinary performer, and educator with a BA from Johns Hopkins University and an MFA from University of New Orleans. The author of PASTEL WITCHERIES (Seven Kitchens Press 2018), Jacob has recent and forthcoming work in Slipstream, Pussy Magic, Mad Scientist Journals, Lycan Valley Press, and Mason Jar Press. A theater artist in Baltimore since 2010, Budenz has performed in and directed numerous productions, including writing and directing an original adaptation of Bulgakov’s THE MASTER AND MARGARITA that appeared in Baltimore City Paper’s Top Ten Staged Productions of 2016, as well as a recent position as the composer and music director for MICA’s spring production, AT THE WATER’S EDGE. By reviewers in the Baltimore Sun and DC Metro Theater Arts, Budenz’s performances have been referred to as “angelic” and “truly grotesque,” respectively.

ALEXANDER D’AGOSTINO is a performance artist, teacher, and arts organizer based in Baltimore, Maryland. He graduated from the Maryland Institute College of Art in 2009 with a BFA in painting. He investigates the queer and otherworldly through dance, ritual, teaching, installation and performance art.

This project is funded by the William G. Baker, Jr. Memorial Fund, creator of the Baker Artist Portfolios, www.BakerArtist.org. In 2017, SIMAETHA: a Dreambaby Cabaret played on a shoestring budget as a “pilot” performance in the attic of the Psychic/Annex space on Park Avenue. After ample workshopping and skillbuilding, the show emerges as something new and better than ever thanks to the generous contribution of the Baker Fund.