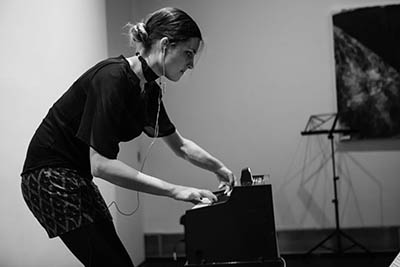 Composer and performer Joyce’s music has been described as one of “serene power” (New York Times), written to “superb effect” (The Wire). Her work is primarily concerned with disability as a creative source. She has an impaired left hand due to a car accident, and the primary vehicle in her pursuit is her electric vintage toy organ which suits her body and allows her to engage with disability on a compositional and performative level. Joyce is a graduate of The Juilliard School, Royal Conservatory in The Hague, and Yale School of Music.

Opening the performance is No Lands, the recording project of Brooklyn-based electronic musician and composer Michael Hammond. His debut album, Negative Space, has been called “one of the most thrilling headphone experiences of this year” (Tome to the Weather Machine) and was named the best electronic album of the year by The Brooklyn Rail. Hammond and Joyce have collaborated extensively, with Hammond providing audio production for Joyce’s debut album, Breaking and Entering.