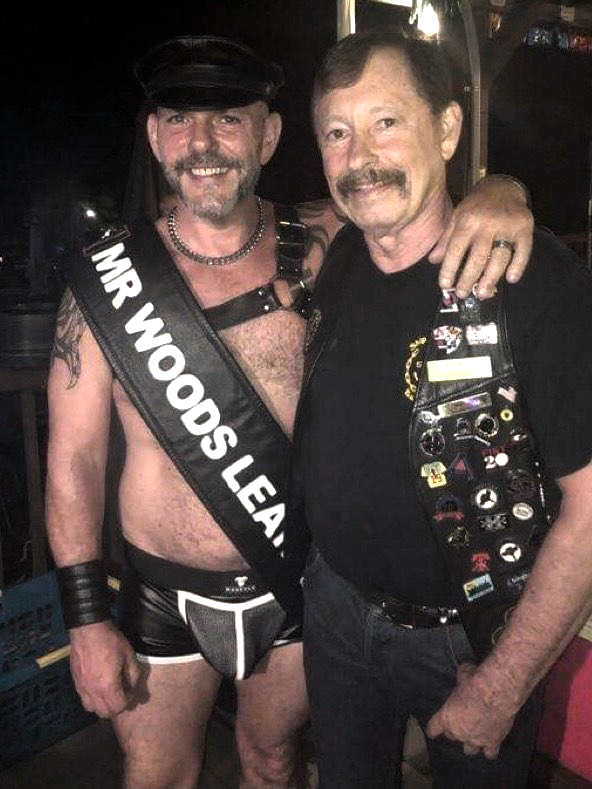 For many years, the ShipMates Club of Baltimore and the Centaur MC of Washington, DC, hosted leather weekends at a campground. The ShipMates called their weekend “Keelhaul” and the Centaur MC hosted “Olympia.” In the spirit of leather brotherhood, the events were alternating years. (The clubs did not wish to conflict or compete.) Odd years brought Keelhaul and on even years leather folks headed to Olympia. Attendees paid one price, which included a bed in a cabin, all meals, endless cocktail parties hosted by various leather clubs, a run pin, and lots of fun. There was always a dungeon “play cabin.” The events were not designed to make money and rarely broke even. They became increasingly expensive to host. The club had to rent the campground, pay for the food and drink (there was always lots of beer and water between cocktail parties), obtain insurance and a liquor license, order a run pin, and pay for countless other expenses. I have many happy memories of those Keelhaul and Olympia events dating back to Keelhaul 1997, when I was a pledge of the ShipMates. Just when I thought those days were over, something magical happened.

On the weekend of June 4th to 6th members of the ShipMates and Centaur MC got together and went to Leather I / Country I Weekend at The Woods Campground in Lehighton, Pennsylvania. Some of our friends from the Pennsmen leather club of Harrisburg also joined us. I guess you could say I was fashionably late to the party. The Woods opened in 2004!

Located on 161 private acres, The Woods Campground has accommodations for tents, campers, motorhomes, and even offers cabins. There is a large pool, cafe, lake, and hiking trails. Sir Steve and I had one of the brand-new cabins complete with refrigerator, microwave, and flatscreen TV. (The last time I booked a brand-new cabin the ship hit an iceberg.) At The Woods it was smooth sailing all weekend. I saw many friends who I haven’t seen in over a year. Even the weather was fantastic with warm days and cool nights.

After a relaxing afternoon at the pool, the official event on Friday night was the 90s Dance Hits Jockstrap Party on the lanai with members of the Pennsmen working the bar for charity. The Woods has an inside dance club area that they were unable to use during 2020 due to COVID-19 restrictions, so a large covered porch area was constructed. This worked out perfectly. Passional Leather Fetish Store from Philadelphia was able to fill the dance club area for their pop-up shop. Before the dance, Centaur MC member Dougie hosted a celebration of life party for his late partner JP, who passed on October 2nd. There was food, champagne, and Dougie opened an envelope and read a toast that JP had written himself for the occasion.

Saturday was filled with fun times. There was a yoga class, massage station, a motorcycle run, volleyball, a cookout, a leather/ fetish swap meet, a traveling drag show, and a live DJ at the pool. At 3 pm over 100 leather folks paid $10, with the money benefiting the Philadelphia AIDS Fund, to take part in a Jell-O shot crawl aroundttthe campground. The area in front of the ShipMates / Centaur cabins was one of the stops. Everyone was having a blast. In the evening there was another leather dance with members of the ShipMates behind the bar and another large bonfire. The Woods Campground does not have a liquor license. Events are BYOB and beverages that are left behind are provided and bartenders accept tips for various charities. My good friend Ms. Woods Leather 2017 / Ms. Dc Eagle 2019 Alyssa Durnien informed me that she helped raise $250 that she will match and will be presenting to the Grace of George Charity and the Trevor Project. Alyssa was not the only leather titleholder in camp. If a parade of leather titleholders were held, it would have been impressive. I spotted three Mr. DC Eagle titleholders, several Mr. Maryland Leather titleholders, and many more. But leather weekend at The Woods is a laid back event with very little formality, just lots of relaxation. Although Sir Steve was very disappointed that the dungeon play space was not open yet, he was still able to host a short informal electro play demo for some curious young men.

Wish you could have been there? No problem, The Woods has two more leather weekends scheduled the year. Leather II / Country II Weekend will be July 16th to 18th. Passional will be there again along with a live leather / fetish fashion show and a leather auction hosted by Jo Arnone, who is always fantastic during Philadelphia Leather Pride Night. The Woman of Drummer and Bucks MC will be in the house. There will be a women’s leather roundtable and a roundtable discussion hosted by Mr. / Ms. Woods Leather titleholders for those folks who ever thought about running for a leather title. The weekend of September 17th to 19th brings Leather III / Country lll Weekend with a Woman of Drummer cocktail party, vending by Passional, the Mr. / Ms. Woods Leather 2022 Contest, and much more.

The last 12 months have been stressful and depressing. I can’t begin to tell you how relaxing and enjoyable it was to escape to The Woods Campground. There is something going on at The Woods every weekend. For the LGBTQ community it is the happiest place on earth. Visit Thewoodscampground.com and plan your escape now. I’m so happy I did!