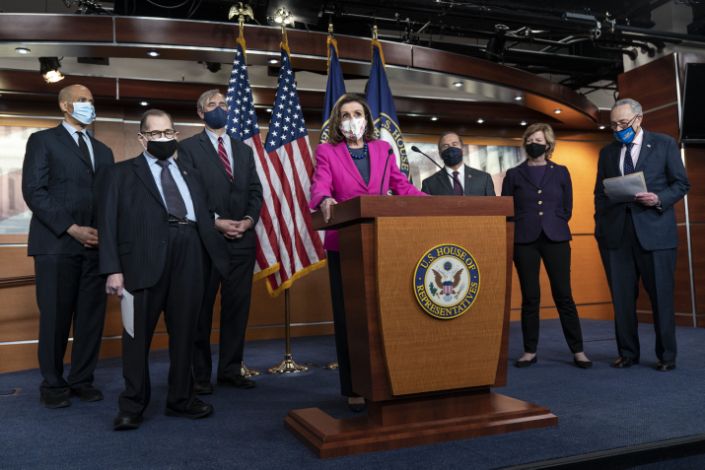 Washington, D.C. – After several hours of often contentious debate, the Equality Act passed the House of Representatives on February 25 with a 224-206 vote. Every Democrat voted for the bill, with three GOP members joining. In 2019, eight Republicans voted for the Equality Act when it came before the House. But in 2021, only Brian Fitzpatrick (R-PA). John Katko (R-NY) and Tom Reed (R-NY) voted with the Democrats. Reps. Elise Stefanik (R-NY) and Mario Diaz-Balart (R-FL) voted for the bill in 2019, but not in 2021. GOP Reps. Susan Brooks (R-IN), Will Hurd (R-TX) and Greg Walden (R-OR) voted for the bill in 2019, but retired at the end of the last Congress.

The Equality Act amends the 1964 Civil Rights Act to include sexual orientation and gender identity for protection alongside race, religion, sex and national origin. The bill also amends the Equal Credit Opportunity Act, and the Jury Selection and Services Act, by expanding protections to include sexual orientation and gender identity. “When you tell people that in a majority of states in this country, you can either be kicked out of your apartment, fired from your job, or denied service in a restaurant because you’re gay or in the LGBTQ community, people think that can’t be true,” said Rep. David Cicilline (D-RI), the lead House co-sponsor of the bill. Cicilline is openly gay.

The bill faced even stronger and more vocal opposition from Republicans this round than in 2019, in part because of the 2020 U.S. Supreme Court ruling in Bostock v. Clayton County. That decision added protections from discrimination for gay, lesbian and transgender employees to the Civil Rights Act. Nearly all the GOP speakers referred to the bill as the “Inequality Act.” Many argued that Bostock was sufficient and no other protections were needed. The objections raised were often framed in homophobic and transphobic terms and language. Like the plethora of so-called “bathroom bills” that have been presented nationwide, these concerns from GOP lawmakers focused on protections for girls and women in women’s facilities, including dressing rooms, public and school restrooms and domestic violence shelters. Republicans argued that transgender women and girls are really men masquerading as women. There was also a refrain that transwomen would overtake women’s sports at all levels, pushing out cisgender girls and women altogether. Additional objections to the Equality Act from Republicans centered on religious freedom. Lawmakers argued that people whose religious beliefs do not recognize same-sex marriage, which has been federal law since 2015, should be protected and that gay people should be kept out of heterosexual spaces. (Philadelphia Gay News – Victoria Brownworth at https://epgn.com/2021/02/26/equality-act-passes-house/)