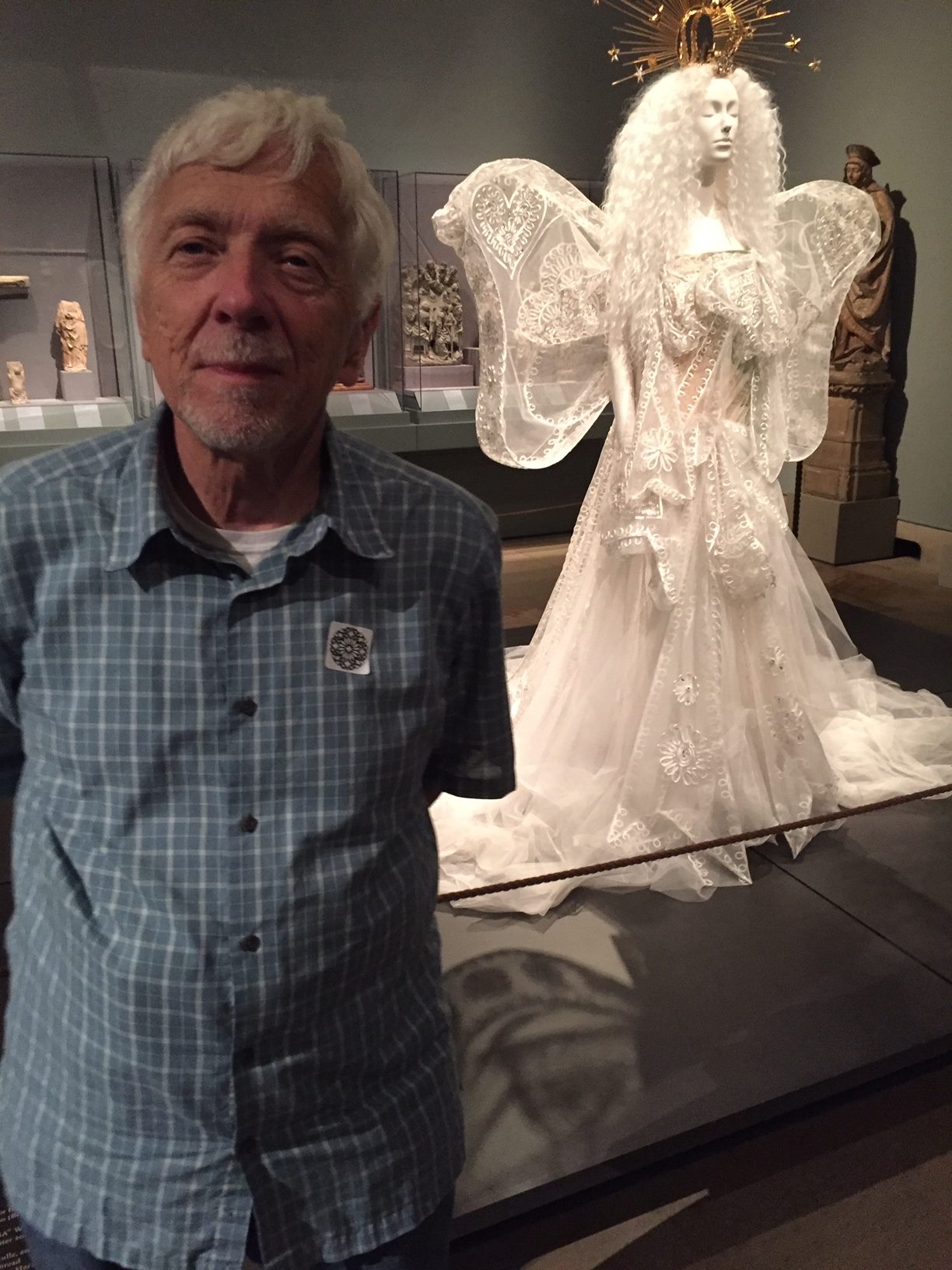 Edward “Eddie” J. Holl, Jr., a founding member of the Baltimore Gay Alliance and its successor organization, the Gay Community Center of Baltimore and Central Maryland, died on Wednesday, November 28th following a nearly two-year struggle with bladder cancer. He was a lifelong resident of Baltimore City who turned 72 on Election Day.

Eddie grew up on Montpelier Street in Waverly and moved to Charles Village in the early 1970s. After living on Abell Avenue for 13 years, he moved to Calvert Court, a cooperative apartment building, in 1990. He was a major presence in the cooperative, developed lifelong friendships among its residents, and served for many years on the governing board. He organized a Friday evening social in the building’s courtyard that has become a regular event on the co-op’s calendar.

Eddie was a very outgoing person who knew practically everyone in the neighborhood. Many affectionately called him the unofficial Mayor of Charles Village. One friend said that if he wasn’t the Mayor of Charles Village he certainly served as its Town Crier. He was a constant presence in the neighborhood and knew everything that was going on. His gregarious persona was marked by a stream-of-consciousness conversational style that might sometimes annoy but mostly endeared him to to his neighbors and many friends. One neighbor said that Eddie was the best conversationalist he ever met.

In 1975 Eddie was one of a small group of gay activists who founded the Baltimore Gay Alliance. At that time there were several women’s organizations but none promoting the rights of both gay men and lesbians. BGA was unique, not only because women and men came together in the fight for gay liberation, but also for its racial diversity, with many African-Americans assuming leadership positions. In 1975, there were no protections for gay people and much discrimination. Eddie showed great courage in joining the organization and visibly fighting against oppression. Upon hearing of Eddie’s death, Paulette Young, the first president of BGA and the Community Center said, “What times we all had! Eddie always had a smile and brought such joy to us all in those early days as we needed that support and positivity that he always brought to the table.”

One of BGA’s first programs was the Gay Switchboard that operated out of a home in Charles Village. Eddie was one of the first people to volunteer for the Switchboard and at least one night a week the switchboards calls would be forwarded to Eddie’s home phone number. For six hours he would field calls, ranging from simple requests for information about gay bars and resources to long, sometimes emotionally draining conversations with people struggling with their sexual identity. There were also prank and hostile, homophobic calls, especially after the Switchboard began to be publicized on WBAL TV during “Saturday Night Live.” Eddie considered the Switchboard a very important service given the total lack of visibility that gay people had in Baltimore at the time.

Eddie also served on other BGA and Community Center committees and participated in many of their functions. He was one of the original $1,000 donors to the Community Center, an important contribution at a time when donations to gay organizations were few and far between.

Eddie was particularly fond of his work at the various Community Center dances that were initially held at the Johns Hopkins University Glass Pavilion and subsequently at many other venues throughout the city. He related his experience as the ticket seller for the bar at a Center dance held at the Steelworkers Hall in Dundalk, not a bastion of progressive values at the time. A steelworker served as bartender for the event and initially expressed anxiety when he realized that the dance was a big gay party. However, Eddie quickly made this man comfortable by joking that he would get a lot of tips because he was so handsome, a prediction that was quickly realized. By the end of the evening the steelworker was offering to volunteer at any of the Center’s future dances.

Following the extremely uptight decades of the 40s and 50s, the 60s and 70s became defined for free love and sexual liberation. Eddie was a product of those times and enjoyed the ease of connection that existed in the gay male community. He also had a special knack for developing a rapport with men of ambiguous or curious sexual orientation and he met many such men at Leadbetter’s and other bars throughout the city. He told the story of one such man that spent a passionate night with him and in the morning announced that he wasn’t “really into this.” Eddie replied, “Well if you ever do get into it don’t call me because I don’t think I could survive.”

Eddie was born to Edward J. Holl, a bartender, and Doris Keenan Holl, a glass worker at the Carlyle Glass factory in Westport. He attended Baltimore City public schools, including City College High School, and was drafted into the army during the height of the Vietnam War. After basic training, he was sent to Panama for advanced jungle training and ended up spending the entire two years of his service in Panama training other troops who would ship out to Vietnam. He said that he had no idea why he was selected to train people in Panama but was grateful that he did not have to go to Vietnam. He was discharged honorably with a rank of sergeant and eventually began to participate in anti-war demonstrations.

Barely two weeks after he returned from Panama, his mother urged him to start looking for work. He answered an ad for the Barton Cotton Printing Company on Sisson Street and was promptly hired. He worked there first in the plant and subsequently in the office for 41 years until the company closed and laid off all of its employees. Barton Cotton had been a family-run business that was eventually sold to venture capitalist who drained it of its resources and destroyed it. After 41 years of completely dedicated service to the company, Eddie was rewarded with a $125 a month pension.

When he first started working at Barton Cotton, Eddie experienced some homophobia from several of his co-workers. But he soon won most of them over. There was one incident that did upset him greatly. He was regularly getting a ride to work from a co-worker who eventually became a Jehovah’s Witness and promptly announced that he could no longer drive him to work because he was gay. Several years later, after the employee left Barton Cotton, he called Eddie very late one night and asked if he could come over. The man appeared to be have been drinking and Eddie got the clear impression that he wanted to have sex, an invitation that Eddie easily refused.

After Eddie was laid off from his job, his mother moved in with him. For the next 10 years he was a devoted caretaker to her. He denied himself vacations and other pleasures in order to provide for her. He was an excellent caretaker who no doubt kept her alive with his meticulous attention to her needs. It was only following his diagnosis of cancer and his need for major surgery and treatment that he was unable to continue to provide for her, which was deeply upsetting to him.

Eddie was very much a caretaker. In addition to his mother, he became the close friend and caretaker of Jack Epstein, an older man he met when Jack volunteered with the Gay Community Center and they became good friends. As Jack became frail, Eddie handled many of his affairs. He also assisted several elderly men who lived in Calvert Court including Manny Velder, whom he took to dialysis three times a week. Reflecting on Eddie’s life, longtime friend Gerry Ronkin said, “Eddie’s defining character was his loyalty: To his family, his many friends, the Calvert Court cooperative, Barton Cotton Printing Company, and the local community of Charles Village where he lived his entire life. He was generous to a fault and unique in that no one could find anything bad to say about him.” Gerry spoke of another of Eddie’s qualities, his absolute integrity in everything he did and with everyone he met.

The cancer diagnosis was not easy for Eddie. It forced the caretaker to become the cared for. However, his niece Dawn Wild, and many friends and neighbors stepped up to support him. During his recent hospitalization they paraded through his room daily. He was particularly thankful for Dawn’s steady presence and the love and support provided by neighbors Carol Anderson-Austra and Pat McCarty, who was constantly by his side.

Eddie was raised as a Catholic and attended the neighborhood parish church. One of the parish priests came on to him when he was 15 but Eddie never saw the incident as a huge traumatic event in his life. When a friend occasionally joked that this was his ticket to financial security, Eddie would laugh and say he simply did not consider the incident a big deal.

However, another episode with the church did have a lasting impact on Eddie. When he went to confession shortly after the priest’s come-on, he confessed to another priest that he had some feelings for men. He was screamed at and told that he would rot in hell and was given 100 Our Fathers, 100 Hail Marys, and 100 Acts of Contrition for merely thinking of men. After that experience, he was done with the Catholic Church; he walked out the door never to return. True to his gay nature, though – everyone knows gay men appreciate fine art and architecture – on a trip to New York this summer he went sightseeing with friends to St. Patrick’s Cathedral and regaled everyone with his discovery that there was an ATM machine in the church!

Eddie’s mother, father, and three siblings predeceased him. In addition to his niece Dawn, he is survived by a nephew, Stephen Thomas Holl, two other nieces – Tabatha Stella Thomas and Melissa Ann Weller – five great nephews, four great nieces, one great great nephew, and a large number of friends and neighbors who will miss him dearly.

A former roommate, Scott Macleod, reflecting on Eddie’s love of life said, “You could not ask for a more faithful friend. In the short period I lived on Abell Avenue with Eddie, I was always struck by Eddie’s genuine simplicity as a human being. I mean that in the best possible way. He was unpretentious and generous to a fault. He would laugh uproariously while watching reruns of ‘I Love Lucy’ and ‘Benny Hill’ on TV. Perhaps most endearing was his Sunday morning ritual of putting Patsy Cline’s Greatest Hits on the record player and singing along as if at prayer, deeply feeling every word. That was religion for Eddie.”

And to that I say Amen!