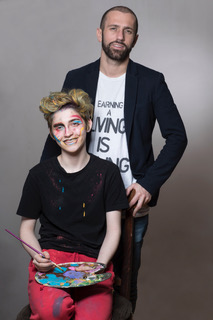 The theatrical release of the film “Draw With Me” has garnered a lot of early Oscar buzz as awards season begins to descend upon Hollywood!  “Draw With Me” is the story of talented teen artist, Brendon Scholl, who identifies as trans non binary, and whose art has been a vital outlet for self-expression.  From coming out as trans and consequently attempting suicide, to becoming an advocate, this intimate portrait of Brendon and their supportive family’s trials dives deep into what endured and was overcome in this heartwarming journey of acceptance. 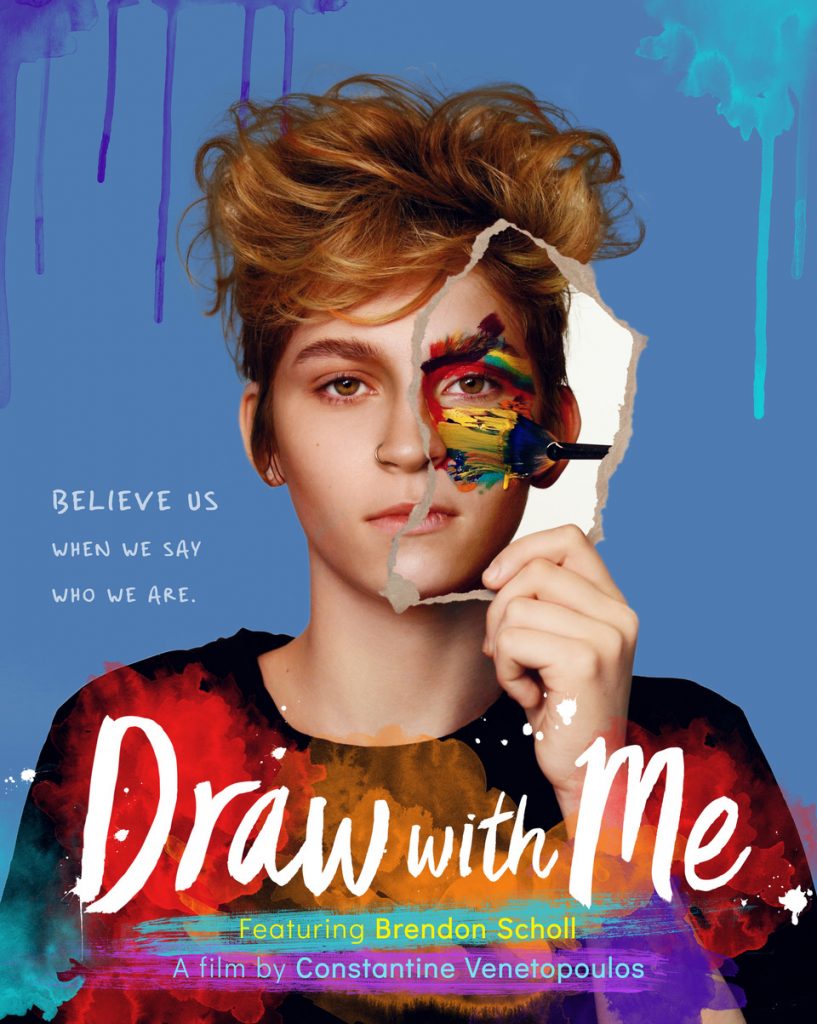 The film features a special introduction by their aunt, Jennifer Lopez, and runs theatrically at ArenaScreen through February 9th.  As Lopez explained in the film, “This film is important and timely in its story and message and can have a huge impact.” Lopez continued, “It’s a story that is very close to my heart, because it is a family affair.  It’s about accepting change and challenges with love, and knowing when we do, everything is possible.”

Both Scholl and the film’s director, Constantine Venetopoulos, recently discussed what this film means to them, and the message they hope others learn from it.

Frankie Kujawa: What does sharing this film, and this story, mean to you?

Brendon Scholl: To me, it means that I can provide some support for people who may feel unsupported. And to be there when someone feels like there might not be anybody there. Which is something that I always really need.

Constantine Venetopoulos: Sharing this story for me is like an educational effort, to be honest. An effort to dissect this story, it’s meaning and what people can learn from it, as well as the ability to use it as an educational resource.  And, the way perhaps how it is for Brendon in making their art has been healing, for me telling stories through film is healing.  [This has] been a massively healing journey for me.  You know, my coming out story was very different than Brendon’s, but with similar little milestones.  Little moments like sharing this film in my school with my teachers and parents in Greece, where I grew up in a suburb and in the closet.  Greece is likhio; it’s not like New York or Los Angeles. So, it was really wild just to experience all of that. And it’s also been very gratifying to feel that I kind of served Brendon, in a sense, to tell their story and use it. Not just tell it, but hopefully it was healing for Brendon.  There was also a gift in telling it for others, too.

FK: Brendon, what advice would you give to other trans, non-binary young adults who are viewing your film?

FK: In your opinion, Brendon, what was the most helpful thing your parents did for you during your process?

BS:  I’d say, for my mom it was [her] going out and doing her own research rather than just asking me.  She would go out and look up what other trans people had said.  Then, if she had any questions, she would then come to me; rather than putting all the pressure just on me to answer all of her questions. For my dad, he kind of just gave me a space to just be.  Where it wasn’t all about the fact that I was trans.  Everything wasn’t focused on the fact that I had come out. I was allowed to still be myself.

FK: The title of this film is “Draw with Me.”  Brendon, in your opinion, define the term ‘art.’

BS: I’d say that art is anything designed to convey a meaning. I include literature, poetry and film and everything into that. Anything that is designed to send a message or say something is art.

FK: Constantine, in your opinion, how will this film act as a light for so many?

CV: It has spread a lot of light, already. I hope it will continue to do so. We’ve done some amazing things with the film that we are very proud of. It was the subject of a discussion at the United Nations at the first transgender health panel in history.  So, it definitely has done some amazing firsts.  And a lot of youth, I feel, have seen it and experienced it. It’s also being used as a resource for The Trevor Project.  So, it’s like if someone is feeling like they don’t know what to do, they can be told to watch this film.  So that to me is very important light because it’s not just light for random people, but it’s light for the people who need it the most in that specific second.  The more we can use it and share it as an educational tool, the better.  We were like, insanely blessed because we had Brendon’s aunt supporting the film, and she presented Brendon the Revry Visibility Award. But even President Joe Biden was part of that award show that screened “Draw With Me,” supporting LGBTQ rights. We were in complete awe that the film has managed to be part of that.

FK: Brendon, how does that make you feel to know that your part of that fabric and light, through the visibility of this film?

BS: It feels like it’s almost separated from me, in a way.  So much of my focus is on my own personal life and other activism that I do, that I don’t really think about the film very often. But then when it does come up, I think, ‘Wow, this is a real thing.’ And I get pulled back into it. In my mind, my story isn’t special.  My story is the story of hundreds of other trans kids all over the United States and all over the world.  The only difference is that I knew certain people and that’s the reason that my story was told. So, it’s kind of like, I want to share my story so that other people can feel like their story was heard.