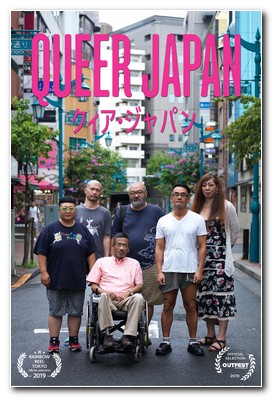 Through five years of development and shooting, Kolbeins and his producers Hiromi Iida and Anne Ishii conducted over 100 interviews, capturing a broad scope of gender and sexuality in Japan. “There is no singular ‘queer Japan,’ because queer people are not a monolith,” says Kolbeins. “This film merely offers a patchwork of personal experiences told by a few dozen artists, activists, community leaders, and everyday people living in Japan today. It is my deepest hope that our approach does justice to the subjects and communities we’re depicting. It’s a great honor to share the stories of the brave individuals who opened their lives to this film, and it’s my intention with Queer Japan to amplify their voices to audiences around the world.”

Queer Japan had its world premiere at the Rainbow Reel Tokyo, beginning a global tour of critical and audience acclaim. The film went on to make its North American premiere at Outfest Los Angeles, going on to screen at over two dozen festivals, including NewFest, Hong Kong LGFF, Philadelphia Asian American Festival, Mix Copenhagen and Reel Afformations. Trailblazing artists, activists, and everyday people from across the spectrum of gender and sexuality defy social norms and dare to shine in this kaleidoscopic view of LGBTQ+ culture in contemporary Japan. From glossy pride parades to playfully perverse underground parties, Queer Japan pictures people living brazenly unconventional lives in the sunlight, the shadows, and everywhere in between. Dazzling, iconoclastic drag queen Vivienne Sato peels back the layers of language and identity. Maverick manga artist Gengoroh Tagame tours the world with his unapologetically erotic gay comics. (Seattle Gay News & Queer Japan – at http://www.sgn.org/sgnnews48_49/page19.cfm)