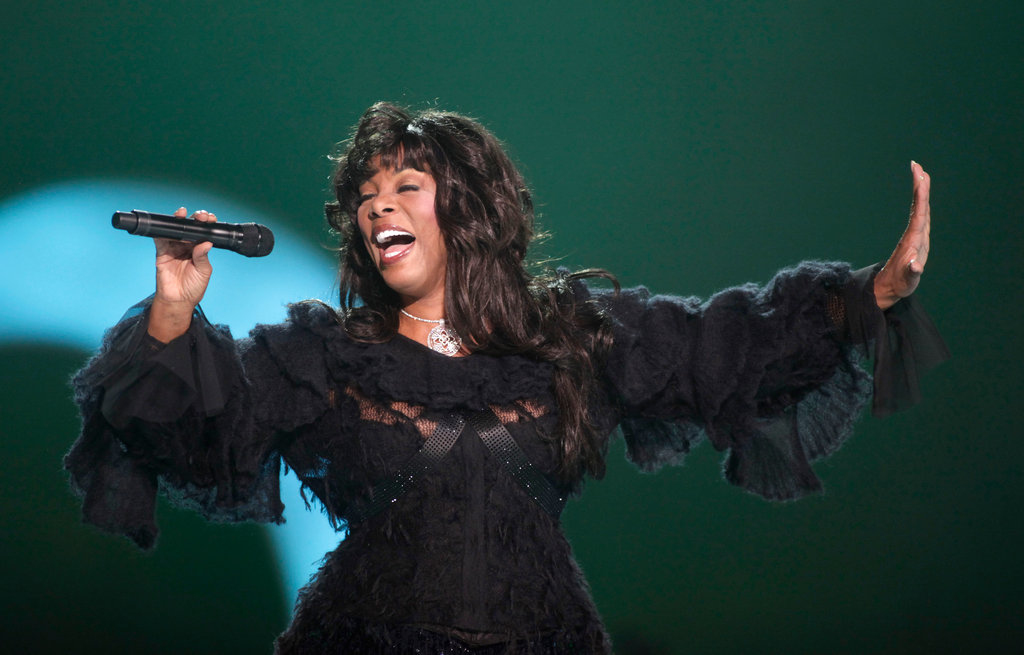 If you’re of the age to remember the first time that Donna Summer’s On The Radio – Greatest Hits – Volumes I & II was released in 1979, you may recall that it came with a large poster of Summer. It was also a single-slot jacket containing both vinyl LPs. Rereleased, no doubt, to coincide with the Tony-nominated Broadway musical Summer: The Donna Summer Musical, the double LP reissue of On The Radio – Greatest Hits – Volumes I & II (Casablanca / Mercury / UMe) no longer includes the poster. That image can now be found in the reissue’s center gatefold. The LPs themselves are now pressed on vivid pink (LP one) and lavender (LP two) vinyl.

On The Radio was the first of Summer’s multiple hits compilations, arriving on the glittering heels of Bad Girls and, as such, is a bit heavy when it comes to that material; featuring five songs (“Our Love,” “Hot Stuff,” “Dim All the Lights,” “Sunset People,” and the title cut). As it turns out, the seamless, DJ-style segueing of the songs worked better on the CD release, which was still a few years away. There was also something confusing about the semi-chronological order of the songs.

Nevertheless, almost all of the significant hits are included, ranging from “Love to Love You Baby” through “Dim All the Lights.” Four Seasons of Love is completely overlooked. “Try Me, I Know We Can Make It” from A Love Trilogy is substituted for her cover of “Could it be Magic.” It’s hard to imagine the thinking behind including a short version of the seminal “I Feel Love” and a longer (and unnecessary) version of “I Remember Yesterday” from the same album. Still, it’s nice that “I Love You,” the highlight of Summer’s 1977 Once Upon A Time concept album, is present. The two “new” songs found on On The Radio include the now legendary “No More Tears (Enough Is Enough)” duet with Barbra Streisand co-written by Paul Jabara and Bruce Roberts, as well as the titular tune (in both the long and short versions) which also served as the theme song to the Jodie Foster movie Foxes.

Originally released in 1976 and newly reissued in an expanded CD edition, Mondo Deco (Real Gone Music / Mercury) by The Quick is as fascinating an artifact of the mid-1970s as are the songs on the Summer reissue. The LA-based quintet combined power pop and glam on its sole full-length album, exemplified in songs such as “Hi Lo,” “No No Girl” (with its “Chopsticks” interpolation), “Playtime,” “Anybody” and, surprisingly, covers of the Beatles (“It won’t be Long”) and the Four Season (“Rag Doll”). Among the ten “Mercury Demos” are The Quick’s take on the movie theme song “Born Free” and the informative (if somewhat confusing) liner notes are also worth a gander.

Oy vey! Like the aforementioned Donna Summer, Jeremy Enigk (of emo-legends Sunny Day Real Estate fame) went all born-again on us on his newly reissued 1996 solo debut album Return of the Frog Queen (Sub Pop). The good news for emo fans is that Enigk didn’t abandon the trademark howl of the genre as you can hear on a song such as “Lizard.” While the album definitely shows us the softer, sensitive side of Enigk, the lyrics mostly shy away from the overtness of praise music in favor of obscurity, with the exception, perhaps, of “Explain.” The instrumental album closer “Fallen” is lovely. The reissue is augmented by five “The End Sessions” bonus tracks.

Covering The Flaming Lips’ 25 years on Warner Brothers Records, and living up to its ambitious title, the triple disc deluxe edition of Greatest Hits Vol. 1 (Warner Brothers) certainly delivers the goods. Of the 52 songs, 35 are drawn from TFL’s psychedelic freak-out Hit to Death in the Future Head through the ambient electro of Oczy Mlody, with each album represented by one to five tracks. It was 1993’s Transmissions from the Satellite Heart, containing the breakthrough single “She Don’t Use Jelly” (included here, naturally), that exposed the Oklahoma-based band featuring front man Wayne Coyne to a wider audience. With each subsequent release, including Clouds Taste Metallic and critical and commercial breakouts such as The Soft Bulletin (containing “Waitin’ for a Superman”) and Yoshimi Battles the Pink Robots (featuring the massive hit “Do You Realize?”), The Flaming Lips went from semi-inaccessibility and semi-obscurity to household name status. The third disc in the set includes 17 must-hear rare selections.

Poor Damien Rice! The Irish singer/songwriter’s stunning 2002 debut album O (Vector/WB), now available as a 180-gram vinyl double LP package, set an incredibly high bar for the artist. Entering our wavelength a couple of years after David Gray’s breakthrough 1999 album White Ladder, you could hear a bit of Gray’s emotional phrasing and songwriting style in Rice’s work. But Rice kept it all acoustic. Where Gray utilized electronics, Rice’s incorporated his singing partner Lisa Hannigan as his secret weapon on songs such as “Volcano,” “Cold Water,” and “I Remember.” Ultimately, it’s “Eskimo,” with the unexpected opera break in the center, that had many listeners proclaiming “O!” The expanded vinyl reissue features an additional six songs, including a couple of live tracks.

A cult classic movie from the late 1980s, the Chiodo brothers’ Killer Klowns From Outer Space has developed a devoted following over the years. On Killer Klowns From Outer Space: Reimagined (Varese Sarabande), the music that John Massari composed for the film, originally performed on synthesizer, was rerecorded in 2017 by the Hollywood Studio Symphony.