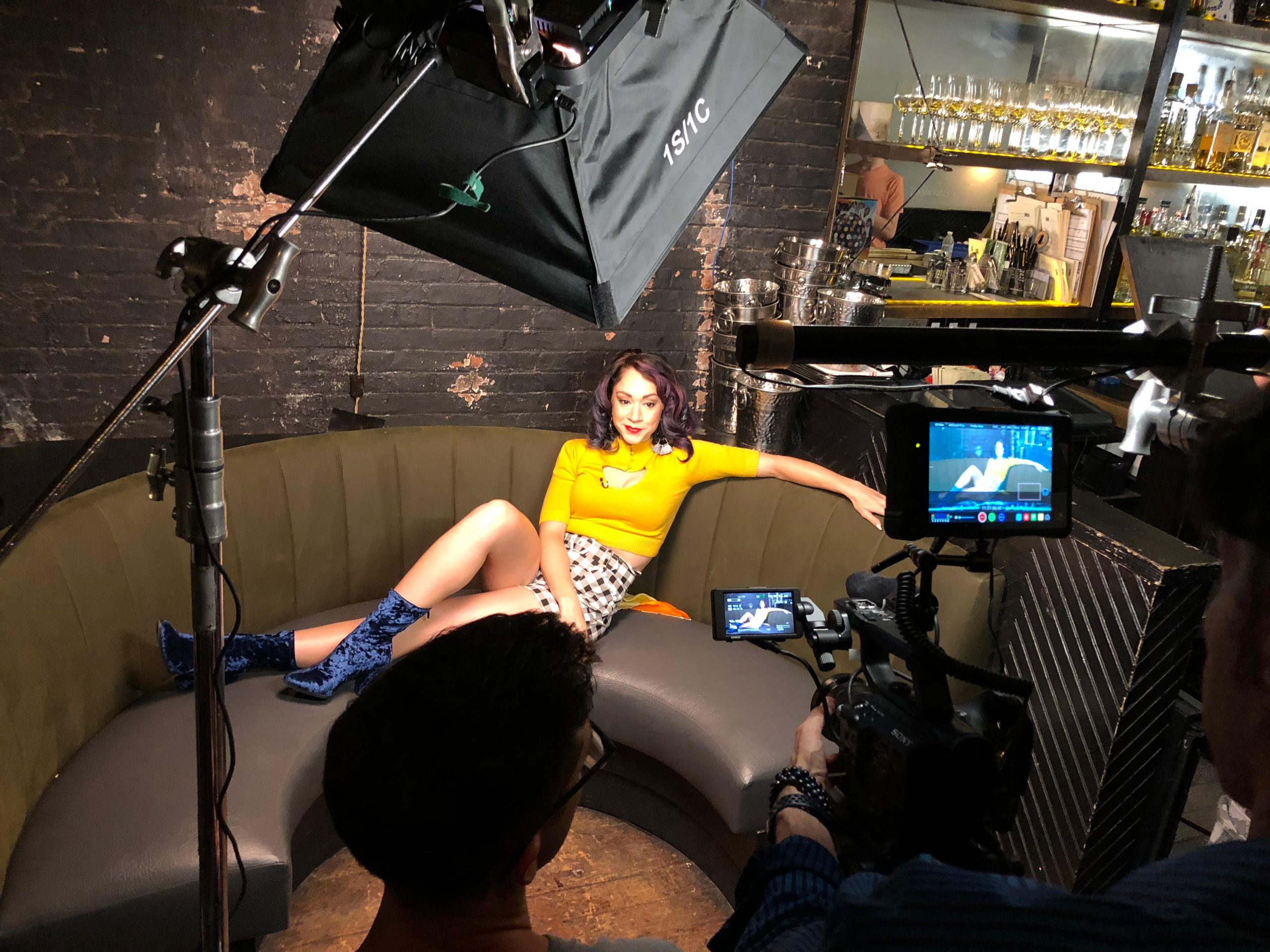 Diana DeGarmo – the delightful singer, songwriter, and actress – spins a deliciously sinful web of intrigue in the pilot episode of “Mélange.” Since its May 20th premiere on Logo, “Mélange” has already garnered quite a bit of buzz from fans and avid followers. The show centers around the fight to gain ownership of Mélange, a historic New York City gay bar. When the founder, mysteriously dies, his vindictive ex-wife, Vivian King (played by “Falcon Crest’s” Morgan Fairchild), and his handsome protégé Ryann (“One Life to Live’s” Scott Evans) battle for control. By Ryann’s side is his best friend (and server at Mélange), DeGarmo’s Melissa Bennett,

“Melissa is a troublemaker with a heart of a gold,” DeGarmo began. “She means well, but she tends to go about things in very bad ways. She has a slightly unhealthy relationship with her best friend Ryann, played by Scott Evans. She is obsessed with him in ways that are probably not good for anyone.” DeGarmo added, “You think she’s harmless, but you’re not sure. She’s a very fun character. We have some really big things brewing. So, I’m curious to see where her storylines will go.”

DeGarmo continued, “It was really fun what we created with ‘Mélange.’ As of now, we’ve only completed the pilot. We’re introducing so many great characters. While on set, Omar Sharif, Jr., (who plays Ryann’s boyfriend, Zayn Hadid) and I had a great time sitting around on set joking and coming up with ideas for our characters like, ‘Oh, we should do this!’ or ‘Oh, we should do that.’ We gave Tom and the editors and the rest of the team some fun stuff to work with. That was the fun part of it. It was a very creative, ‘Wild West’ experience.”

DeGarmo’s career has skyrocketed since she first burst onto the scene on ‘American Idol’ in 2004. Since ‘Idol,’ DeGarmo has released two albums, Blue Skies and Gemini. DeGarmo has also ventured into a career in musical theatre. She has starred on Broadway, off-Broadway, and in three national tours. She made her television acting debut in a six-month arc as Angelina, the daughter of resident mobster Angelo, on “The Young and the Restless.” The actress has performed in films, as well. DeGarmo is married to singer, songwriter, and actor Ace Young.

It was during her time in the off-Broadway musical comedy, The Marvelous Wonderettes, where she first met “Mélange’s” creator and producer, Tom D’Angora. “I’ve known Tom for several years now. We worked together when I joined The Marvelous Wonderettes. We became great friends through that process with both a love for soaps and a love for the dramatics of it all. He reached out to me and was like, ‘This part [of Melissa] is for you.’ And, at first, I was like, ‘Are you sure? You want me to do this?’ I’m not typically known for those roles. But I guess it is very similar to Angelina from ‘The Young and the Restless’ in some aspects.” DeGarmo added, “You know, I love playing a troublemaker. Somebody who will throw a wrench into things.”

Soon, DeGarmo was on the next flight to New York for filming. “It’s fun to know the possibilities with ‘Mélange.’ Not only because I know Tom as a friend, but because he’s a great writer. He wants to make these characters real people and not just caricatures. My character of Angelina on ‘Y&R’ was a great opportunity at the time, and I loved working on the show. But, you do look back and you go, ‘Oh, I could have done maybe this or that with it.’ I just didn’t know because I was young and silly at the time. So, I’m looking forward to where ‘Mélange’ can take us and to where Melissa can take us, as well.”

DeGarmo delved into why she believes the serialized storytelling / soap opera genre is making a comeback. “This genre gives audiences a bit of these ‘What ifs.’ I think that’s fun. We play into the fantasy of life. Life really is more ridiculous than art. And as much as we try to make TV and films ‘real’, at the end of the day life is twice as wacky and wonderful. And soaps – they’re there to go there. They are there to say, ‘Well, this could happen, and this could happen.’ It’s kind of like we get the opportunity to see all of the alternate universes, all of the alternate dimensions, within one show. What I especially love about ‘Mélange’ is its showing a community. I’m obviously not LGBTQ but I work a lot in that nightlife community, and I feel like that community hasn’t really been fully represented or shown in a lot of ways. I think it’s a cool, new world to play in, and for the soap opera genre to live within – with New York and the bar scene and all of the different intricate lives that are within it.”

Even though stuck in quarantine, DeGarmo has kept herself busy with some fabulous upcoming projects. “At first, we went through a definite period of mourning. There’s a grief right now holding our industry hostage. It was difficult because we’re so used to always ‘Go! Go! Go! Create! Create! Create! Do! Do! Do!’ And, as an artist when you don’t have human beings to do that in front of, it’s been an interesting shift. But we are all finding new ways to continue entertaining people and being creative. And we took a little time at the beginning of quarantine to really just recalibrate and get back to the basics of things. I am debuting a live stream show for my birthday on June 16th. That’s a fun, new, challenging adventure. I’ve never done a life stream show before. There’s also my newest record, and I’m doing a bit of this and that with my husband. I have been shooting a bunch of skits and random funny things that we’ve had playing in our brains. Different creative ideas that you go, ‘Oh, when I have the time, I’m going to do it.’ Well we have nothing but time,” DeGarmo laughed. “We’re writing a holiday album. We’re looking to do a Christmas in July live stream special from our house to yours on July 25th.”