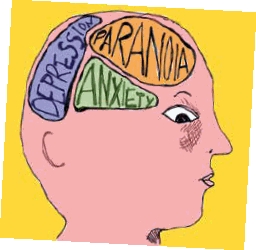 The majority of parents are lucky. Most of us never know what it’s like to live with a mentally ill child. Even among those who have family members who suffer from mental illness, most of those cases are not severe.

Many of our children have mental illness in some form or another. Unfortunately, it’s the result of living through childhood trauma. I’ve talked about some it before. It’s not pretty and it’s not easy, but it’s been a prevalent part of our lives for more than 20 years.

Two months ago, one of our adult sons was sent, against his will, to a psychiatric hospital. His name is Michael and in his attempt to cope with his many anxieties and paranoias, he has become violent. In reality, I guess he’s always been violent. Even as a little child, it would often take two or three grownups to restrain him when he became mad.

His body is covered with self-inflicted scars. When he gets angry, he bites himself or scratches his face. Sometimes, he picks up a stick or tool and tries to stab himself. He bangs his head on the ground or hits himself with objects. And, if anyone tries to stop him, he attacks them, too. It can be pretty scary to witness, much less participate in. The final straw came when he started attacking without provocation. So sadly, he had to go somewhere that could keep him and those around him safe.

Having him at home is difficult, even when he isn’t attacking himself or someone else. He begs and whines. Nothing is ever good enough for him. If he gets cake, he demands ice cream, too. If he’s playing a game, he wants to play a different one. If he’s watching television, it’s never on the right show. Whatever he doesn’t have is what he wants. Whenever I wasn’t home, I’d panic if the phone rang. Sometimes, it was the police at our door because he’d run away again and they were bringing him home. Sometimes, it was one of the kids who was scared because Michael was starting to get anxious. And, his anxiety moments always led to a violent outburst.

I think the worst part of raising a mentally ill child is the judgement we get from other parents. I belong to an online support group and the folks there are always complaining about the judgement – from family, from friends, from complete strangers. It doesn’t matter. The comments are harsh and meant to hurt.

With my sick kids, I found that absolute structure was easier for them to handle than any other reality. My mother would accuse me of being too strict, but she didn’t live with the craziness at home. She’d see the kids for a couple of hours. I had to live with it. She didn’t understand.

Unfortunately, many parents of mentally ill children, we struggle with the loss of friendship and estrangement from family members. People judge the way we parent our children and, frankly, they judge our children. They don’t understand why these kids make the decisions they do, so they criticize them. They don’t want my kids to play with their kids. Even the ones who have kids with their own set of issues, don’t want to add my kids’ issues to their reality.

So, I urge you to be thoughtful when you see that out of control child at the grocery store. I’ll bet his parents have some long and difficult days. Or, when a child asks the same question over and over. Maybe that kid is developmentally challenged or has processing issues that make it hard to retain information. But, even more, I ask you to be kind to that weird kid – we all know at least one. There’s always that kid who is going to be teased at school, sit alone at lunch, and not have anyone to hang with on a Saturday afternoon.

That kid deserves love and affection as much as anyone. That kid is a prisoner in his own mind. He gets anxious and doesn’t know why. He makes strange decisions and justifies them with strange statements. He is the one who needs our acceptance.

Be kind and understanding, knowing that no matter what, those parents are doing the very best job they know how to do. And, unless you walk a mile in their shoes, you have no idea how hard it might be.