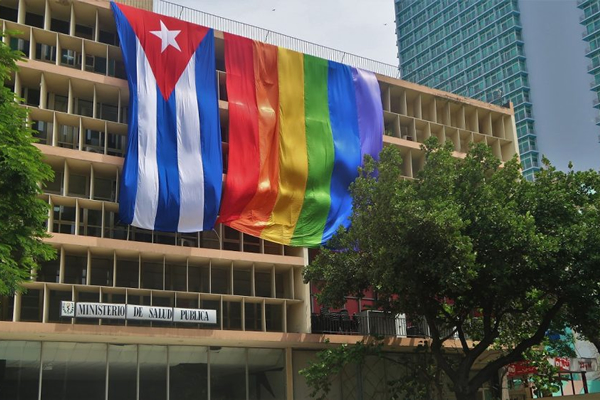 Havana, Cuba – Cuba draped its health ministry building with a giant rainbow flag on May 17 to mark the International Day against Homophobia. “I never thought I would live to see the flag of the sexual diversity movement hung next to the Cuban one on such an important institution as the health ministry,” said Teresa de Jesús Fernández, coordinator of the National Network of Lesbian and Bisexual Women, after posing for a photo with the flag. The display comes at a critical time for the country’s LGBTQ community. Cuba will soon pass a new family code, which could include marriage equality. A proposed marriage equality provision was removed from Cuba’s draft constitution in 2019 after protests by religious organizations.

The LGBTQ community’s relationship with the Cuban government has had its ups and downs. For some years after the 1959 revolution, the country’s government identified LGBTQ people with the mafia-run sex tourism industry that it wished to suppress. As a result, LGBTQ were often sent to correctional labor camps. In a 2010 interview with the Mexican newspaper La Jornada, then-President Fidel Castro publicly apologized for his government’s actions, saying it had been “a great injustice.”

Fidel’s brother and successor as president, Raúl Castro, became an important ally of Cuba’s LGBTQ community, influenced by his daughter Mariella Castro, the director of the National Center for Sex Education. Raúl’s successor, current Cuban President Miguel Díaz-Canel, is also an LGBTQ ally. As a young provincial Communist Party leader, he opposed more conservative party members by backing a local LGBTQ-friendly bar. Commemorating the International Day Against Homophobia, Díaz-Canel wrote that Cuba was committed to guaranteeing all rights for all people. Cubans currently enjoy the right to free gender-affirming medical treatments, including free surgery, and protection against workplace discrimination on the basis of sexual orientation. The government has also sponsored annual congas against homophobia, Cuba’s equivalent of Gay Pride parades. In spite of the progress, members of the Cuban LGBTQ community say they have been frustrated by the slow pace of change in recent years while other Latin American countries have moved forward with approving same-sex marriage. In his speech to this year’s Communist Party Congress, Raúl Castro admitted he was disappointed that action against sexism and homophobia was not proceeding as quickly as he’d hoped. (Seattle Gay News – Mike Andrew at http://sgn.org/sgnnews49_21/page16.cfm)