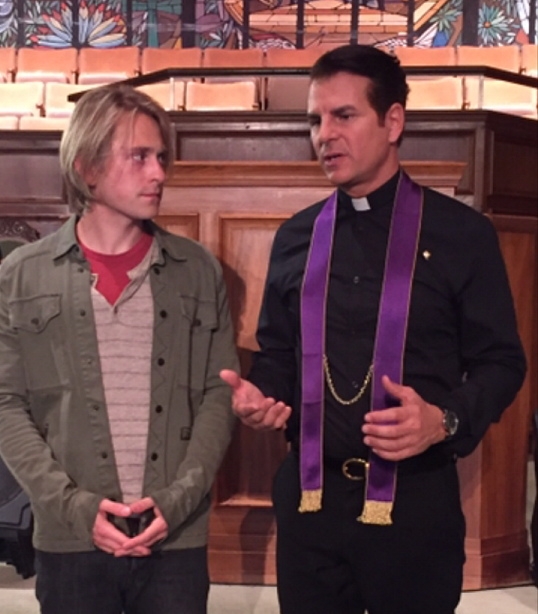 Bay City residents fight for redemption, true love and new beginnings in a town where murder, betrayal, heartbreak, and vengeance must be in the water

Living in a world where Trumpian politics and pandemonium permeate the daily national news cycle; it’s refreshing to find escapism and fantasy still alive in Amazon Prime’s Emmy Award-winning drama “The Bay.” Shrouded in mystery, the privileged and often time dysfunctional Bay City residents fight for redemption, true love and new beginnings in a town where murder, betrayal, heartbreak, and vengeance must be in the water.

Among the recent storylines, one in-particular has been noticed within the LGBTQ community. Daniel Garrett (portrayed by actor Eric Nelsen) recently struggled coming to terms with his sexuality. Confessing his ‘sin’ to Bay City’s Father Leone (portrayed by Baltimore-native Vincent De Paul), Daniel comes to grips with who he truly is thanks to the affirmation from Father Leone that “God made you perfect as you are.”

Baltimore OUTloud exclusively chatted with multiple Emmy-award winning actors Nelsen and De Paul regarding their current storyline. “It’s something that so many people, friends and family even, have struggled within their lives.” Nelsen began. “The process of telling a coming-out story is such a delicate storyline. My character, Daniel, has been through a lot of ups and downs on the show. We really get a good idea of why he’s been the way he’s been. I wanted to show that it’s ok to have struggle and it’s ok not to understand something, especially when it has something to do with yourself. It’s normal. As we see in the show, as soon as Daniel accepts himself everyone around him was on board and supportive.”

De Paul added, “The importance of this subject matter is so relevant, especially now, because as a society we need to see more positive role models. Gregori J. Martin (creator of “The Bay”) was a pioneer seven years ago when he started this show.” De Paul explained that a webisotic series such as this, one filled with soap opera stars from past and present, was ground-breaking for its time. Nelsen continued. “This topic is so relevant and so many people are struggling with this exact situation. So many people don’t necessarily want to accept who they are and it’s sad on many levels. This is possibly due to their surroundings and the people in their life. In Daniel’s case, he was raised within a religious background.” During the episode, Daniel confesses to Father Leone that he is attracted to men, and his priest reacts still wanting to know what his sin is. He replies telling Daniel that God made him perfect as he already is, and Daniel never thought his priest would react in such a way. “It’s such a beautiful moment.”

De Paul explained that the scriptwriters wrote his dialogue, but at the end he asked to specifically add the ‘God made you perfect line.’ “I’m really, really happy it survived the end cut. I thought it was a great statement to make; that you’re ok and we can tell that to every kid watching. As viewers watch further in the show, the character of Daniel comes out to his friend and his sister, and is relived to find that it’s ok to be himself. His sister loves him and accepts him unconditionally. Unconditional love is what each character shows to each other in this storyline.”

Nelsen added, “I think it really shows how culture is changing, and although it’s been a lot slower than it should have been through the years, I think we’re making huge strides. I thought that was such a beautiful way for Gregori [J. Martin] to showcase Daniel’s struggle in that moment with Father Leone.”

Past and current seasons of “The Bay” can be streamed on Amazon Prime.