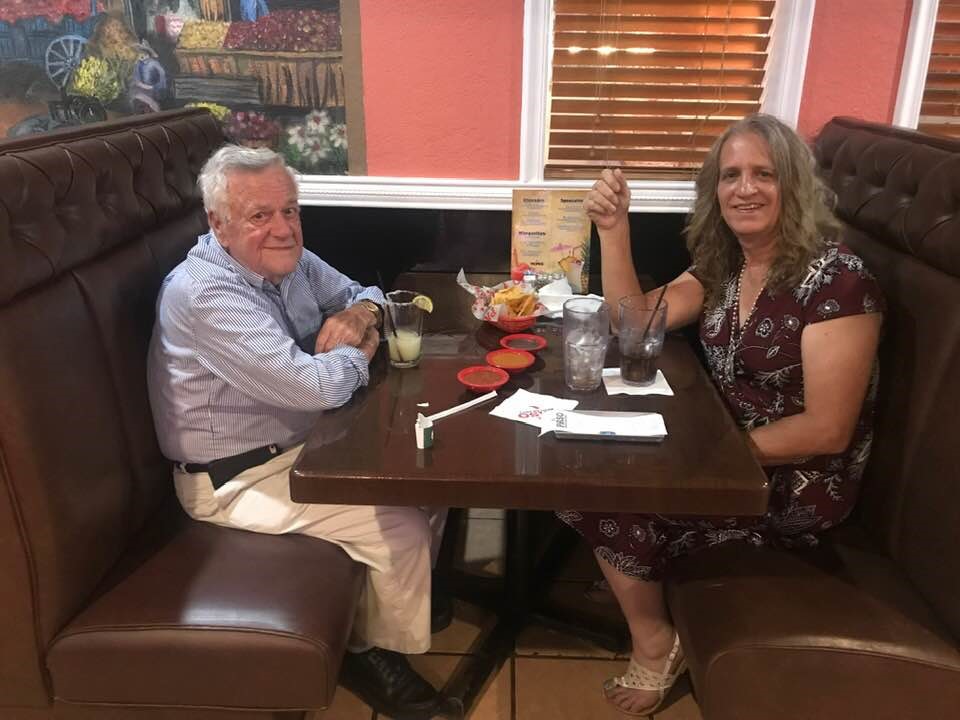 This past year I came out to my father over 100 times. My father is 92 and dementia has started setting in. Actually, he worked until he was 90 and physically, he is fine. But his short-term memory is really bad. I remember the first time I told him I was transgender; gosh it was really hard. I had so many emotions that overloaded me. I had already told my brothers and he was next in line. He is such a nice guy. After I told him he said he would keep it a secret and not tell my brothers or anyone else. I told him it was okay; my brothers already knew. We hugged, I cried. It was a very nice moment. However, because of his short-term memory problems he promptly forgot.

Over the next several months after several auditions I would go by and see him. I would wear whatever I wore to my auditions. I think I used this as a way for him to get accustomed to see me in female attire. He would never ask me, but he would always ask others, why I was wearing women’s clothes. They would tell him because of my acting, he would seem to be okay with it but found it quite funny.

When I went fulltime, I wore dresses for most of my first year. My dad would get a chuckle then asked why I was in a dress. Well it went more like, “What are you wearing?” I’d say, “A dress dad.” He would ask, “Why are you wearing that?” I’d say, “Because I am transgender dad.” One day I thought maybe he didn’t know what that meant. So, I tried to rationalize it for him, but after a while I gave up. And so, did he after about three months of seeing me 4 to 5 times a week in a dress.

Most of the time he does not understand that I am transgender. This makes for interesting conversations. He has moved into an assisted living home. When I go to visit, he always introduced me as his son. He’s proud of having four boys. I usually tell who ever he is talking to that he had three boys and me. He has never been mean, but that’s because he is such a nice guy. He has thought that me wearing a dress as funny. I think this is a generational thing. So, what do you do? I can tell you what I did. I just went with the flow. It has never really bothered me because I know he loves me. Also, he has such a good heart.

I usually go out to eat with my dad once a week. He has never been embarrassed going places with me, even in a dress. It’s a fairly small town but not that small. It confuses him when people refer to me as she. I think he’s finally getting it after almost a year but for me it’s a small price to pay to let him know who I am.

I never got the chance to tell my mother. Actually, she was the first person besides my wife that I wanted to tell. I tried on several occasions but chickened out. The last time I tried to tell her I had decided that no matter what I would tell her that day. But when I started talking, she asked me if my aunt and grandmother could listen. I asked what are you talking about? Because they both had died twenty years prior. She said, “They are right there,” and pointed to nothing. At that point I asked myself why am I doing this? Is it for me or for her? As I looked at her, I just couldn’t do it. Because I rationalized that it would be mean because she wouldn’t understand. So, I didn’t.

A week later she collapsed in a comma and died. My brother also died on that same weekend. This event was the catalyst that started my real journey to be me. With-in two years I came out and six months later I went full time. Don’t let people to die without letting them know who you are. I did and still regret it to this day. I miss you mom.

This article was written B.C. (before Corona) I have missed my lunches with my dad. Because he is in an assisted living home, I am not able to visit him recently which makes me sad. I have talked to him on the phone while standing out his window several times. Life changes in a blink of an eye. Don’t let it painful without being true to yourself. As always love, light, and peace. Sophie