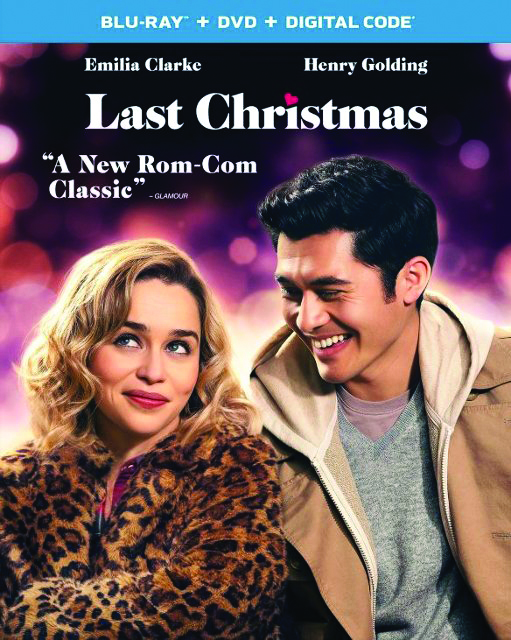 If you missed kooky / tearjerky rom-com Last Christmas (Universal) during its brief run in multiplexes in December, fear not. It’s arriving on digital disk just in time for watching or giving as a gift on Valentine’s Day on February 14th..

When Kate (Emilia Clarke) was a young girl she got solos in the church choir. While still chasing her dream of becoming a singer and actress, she works dressed as an elf in a Christmas shop run by a woman who goes by the name Santa (Michelle Yeoh). As if the costume and constant disparaging remarks from Santa aren’t degrading enough, she’s currently couch-surfing after moving out of her immigrant parents’ house.

Kate, who is called Katarina by her mother Petra (Emma Thompson) and lawyer-turned-mini-cab-driver Ivan (Boris Isakovic), was a coddled, sickly child. As an adult, she was fortunate to receive a heart transplant. Nevertheless, this parental treatment caused years of stress between Kate and older sister Marta (Lydia Leonard), who is successful in her job but has not been given as much attention as Kate.

Regardless of her health situation, Kate has a history of bad choices and destructive behavior. She went home from a bar with a man whose girlfriend returned early and caught her in the shower. She has electrocuted a friend’s fish and set another friend’s model galleon on fire. She is also very irresponsible at work. To make matters worse, she’s rolling her suitcase around London with nowhere to stay.

Her one source of joy is George Michael, whose music is stitched into the fabric of the movie, sometimes as background and other times essential to the story. Another unexpected source of happiness occurs when she “meets cute” a hot young man named Tom (Henry Golding). Through all of her trials and tribulations, Tom is there for her, providing encouragement, teaching her to ice skate for a “Frozen on Ice” audition, showing her London sites she’d never seen before, teaching her how to be an all-around  better person and always telling her to “look up”.

Kate eventually comes to her senses. She’s a better employee. She makes amends with Marta whom she cruelly outed at a family dinner. She apologized to all the friends she wronged over the years. She even exhibits sensitivity to both family members and strangers caught up in the racial tensions being highlighted by Brexit (a completely unexpected addition to the storyline).

Directed Paul Feig (“Bridesmaids”), Last Christmas wants to be the 2010’s Brit holiday rom-com in the mode of Love, Actually, The Holiday, and Bridget Jones’ Diary. Depending on how you feel about that kind of sappy manipulation, you will either love or hate Last Christmas. To be fair, the big reveal, a happy/sad guardian angel finale with a twist (no spoilers here!), may come as a surprise to some viewers and put the movie in a category of its own.