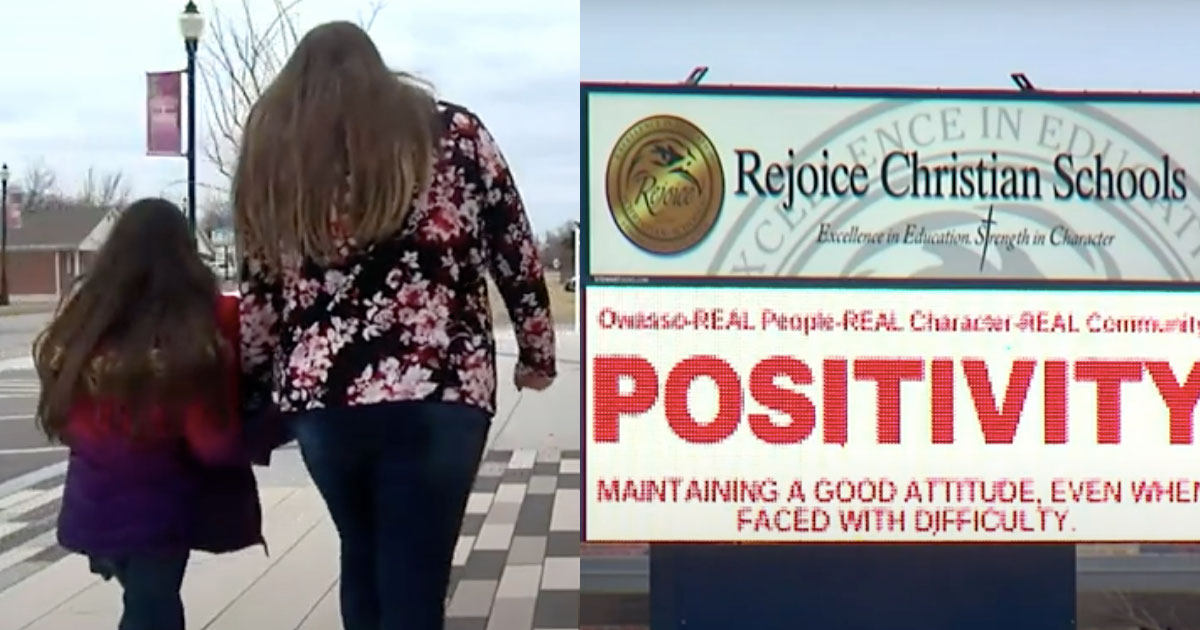 Owasso, OK – David Hudson reports for Queerty that a mother says that a private, Christian school in Owasso, Oklahoma, has expelled her second-year daughter after she told a fellow female classmate she had a crush on her. Delanie Shelton told Fox’s Tulsa-based affiliate Fox23 the vice principal of Rejoice Christian School called her daughter, Chloe, in for a talk after the playground incident, which took place on January 21. “[Chloe] said the vice principal sat her down and says the bible says you can only marry a man and have children with a man,” Shelton said. “My daughter was crying saying ‘Does God still love me?’”

Delanie Shelton was rung and asked to come to pick her daughter up. “The vice-principal asked me how do I feel like girls liking girls and I said if we’re being honest, I think it’s okay for girls to like girls and she looked shocked and appalled,” said Shelton. The mom said she is raising her kids to love whoever they wish to love and not judge others. Shelton received a call from the school the next day, Friday, to tell her Chloe and her five-year-old brother were no longer welcome at the school. Chloe, said she felt “really sad and betrayed and kind of angry” at her expulsion, but had been heartened by the many messages of support she’d received. “I feel so loved and supported, thank you so much to everyone who helped me feel better for being who I am,” she told Fox23.

Rejoice Christian Schools describes itself as, “one of the largest Christian schools in the Tulsa area. It is our Vision to be a Christian school that provides students with excellence in education and strength in character so that students will be spiritually, intellectually, physically, and socially equipped to impact their community and the world for Christ.” Approached by the media, the school first pointed to its handbook for students. This states it encourages friendships between students but nothing beyond this: “We do not allow students at Rejoice to engage in boyfriend/girlfriend relationships while at school.” However, it does not say anything about expelling kids if they fall foul of this principle. The school’s Superintendent, Joel Pepin, later issued a statement saying: “Due to privacy and other factors, it is the school’s policy to refrain from public comments regarding any particular student or family.” (Queerty – David Hudson at https://www.queerty.com/oklahoma-school-expels-8-year-old-sex-crush-friend-20210129?utm_source=Queerty+Subscribers&utm_campaign=3b76401879-20210129_Queerty_Newsletter&utm_medium=email&utm_term=0_221c27272a-3b76401879-431876119)