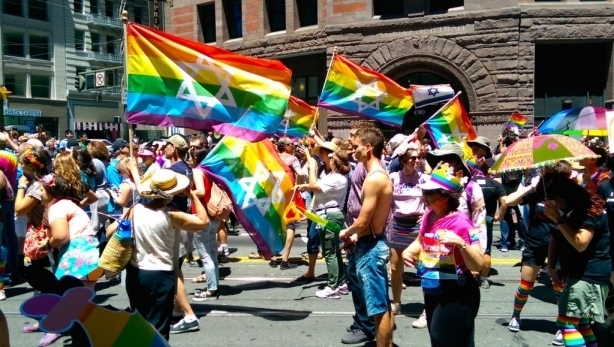 Hard headline, so let me make it more clear.

Whoever is in charge of the Chicago Dyke March has their heads up their asses. If you’ve read this column before, you’ve never read language like that from me before, but I’ll let you judge. Here are the facts:

About 1,500 people gathered to be a part of the Chicago Dyke March earlier this month. As with many LGBT events, people bring their own posters, picket signs, and flags. There were signs representing many views at this march but organizers asked only one group to leave: three women with rainbow flags with a Star of David superimposed on them.

According to the Windy City Times, one of the women– Laurel Grauer, a member of a group called A Wider Bridge– said she and her friends were approached a number of times in the park because they were holding the flag.

“It was a flag from my congregation which celebrates my queer, Jewish identity, which I have done for over a decade marching in the Dyke March with the same flag,” Grauer told Windy City Times. She said she lost count of the number of people who harassed her. One Dyke March Collective member said the women were told to leave because the flags “made people feel unsafe,” and that the march was “anti-Zionist” and “pro-Palestinian.”

The stupidity of that statement is overwhelming. First, the Star of David, as reported in Windy City Times, stands for a religion, not a country, unless it has the blue and white, which a rainbow flag does not. Second, many people have various forms of rainbow flags, different colored stripes and various logos on them. Third, one can be Jewish and have pride in their religion and not be pro-Israel. As to the unsafe statement, in their rush to support Palestine, the group sanctioned a slogan “From the river to the sea.”  That slogan literally was a PLO slogan to Wipe Israel and it’s people off the face of the earth, that’s violence, that the Dyke March sanctioned. Finally, stereotyping all Jews as pro-Israel is like stereotyping all Muslims as terrorists. That said, here’s another way to look at it: Would you threaten and forcibly remove someone with a cross on a rainbow flag? How about an Islamic symbol on that flag? Bet not, and you shouldn’t.

I’m proud to be a part of an email chain that includes many of us organizers, marshals or marchers in that first gay Pride march in June of 1970. Many of us were shocked at this action. We have been discussing it and I suggested a way that might show the Chicago Dyke March the errors of its ways. Next year, Jews march with the pink triangle Star of David. That symbol has nothing to do with Israel, it has to do with oppression.

Our community is fighting oppression and it can’t do it splintered. We need to begin to unite and agree to disagree with someone’s political differences respectfully. Hell, the U.S. president wants to ban Muslims; should we outlaw American flags? Unite, don’t oppress.