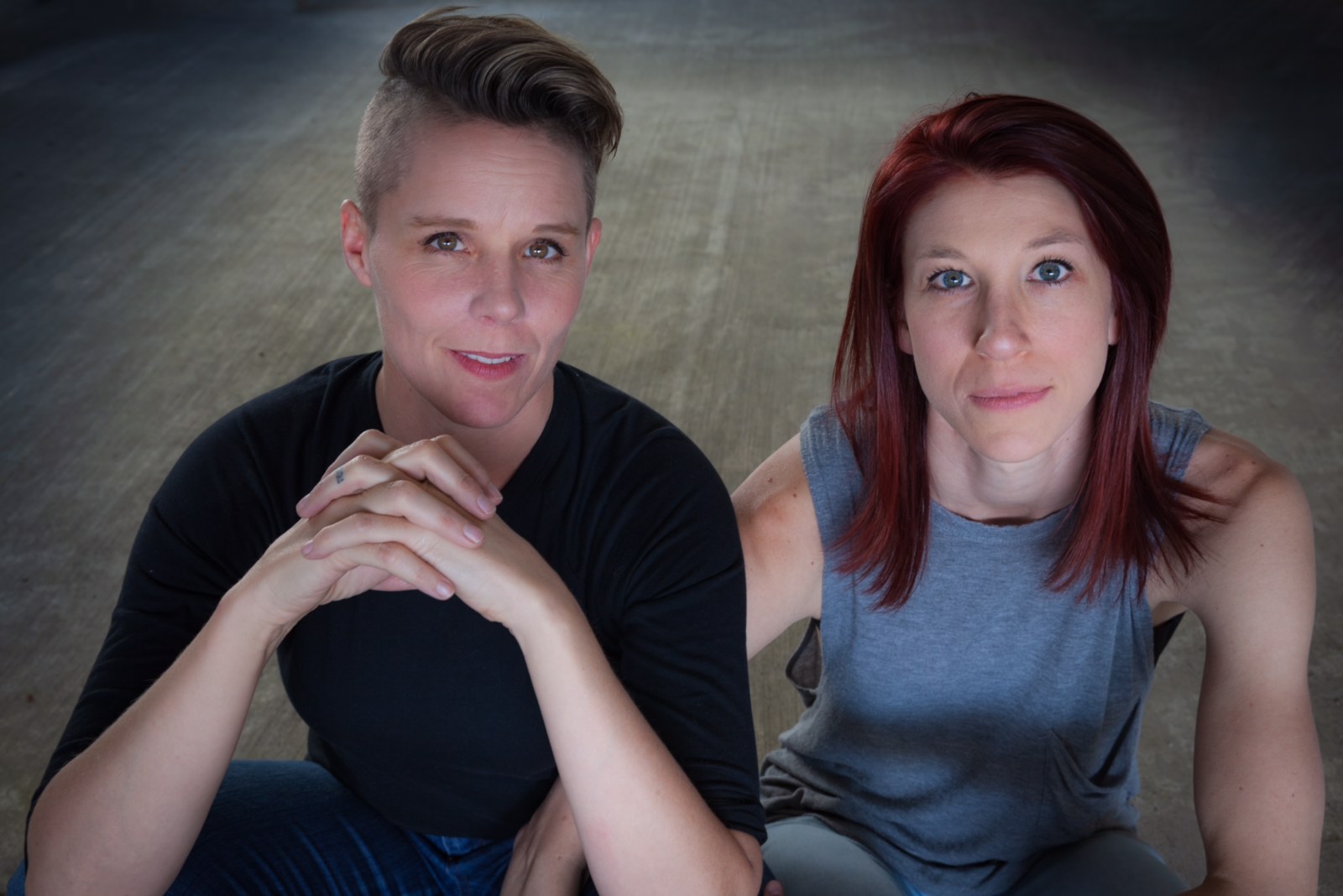 Fun Home, the 2015 Tony-award winning musical adapted from Alison Bechdel’s 2006 graphic memoir of the same name, takes the stage this month at the Baltimore’s Center Stage. Running from Thursday, January 17th to Sunday, February 24th, Fun Home is the first Broadway musical with a lesbian protagonist. Baltimore OUTloud recently chatted with choreography team Jaclyn Miller and Sara Bruner, who are also are a real-life married couple offstage, as well.

“Our inspiration,” began Miller, “was to pull as much imagery from the graphic novel written from Alison Bechdel. [The choreography] is directly lifted from a Jackson 5-sort-of-feel.  That was the inspiration for the style of movements.” Bruner added, “A lot of the play is memory pieces, and a lot of it takes place in the 70’s.  We had a lot of great resources to explore that decade.  We were able to pull from specific movements and get a general flavor from 70’s commercials, The Brady Bunch, The Partridge Family and were able to marry those with the graphic novel.”

Directed by Hana S. Sharif, the performance opens as lead protagonist Alison works on her memoir in the present day. Currently a successful middle-aged cartoonist, Alison recalls two crucial time periods in her life. The first is her childhood, when she struggles against her father Bruce’s obsessive demands and begins to identify her sexuality. The second is her first year in college, when she begins her first relationship and comes out of the closet as a lesbian.

“For me,” Bruner began, “I think Fun Home is a journey of self-discovery and the only way it can be done is to look back and understand yourself through your parents and to re-examine memory, as well.  Maybe you can get a new outlook when reflecting on your memories as your adult self.  I know, that for me, as my adult-self 30 years later, I can look at things a lot differently now.  I can gain empathy for my parents, as well as gain empathy for myself.”

Miller, a Los Angeles, California-native, has been working on and off since she 18 years-old.  “It’s an interesting thing,” Miller explained, “I was asked this question the other day.  I really don’t have any institutional training.  I went to a high school for the performing arts and was taken under the wing of someone in the Broadway community.  He has ushered me through the business and gave me a lot of opportunities.  A lot of my training has been just being in the room with a lot of artists.”  After assisting many choreographers, Miller wound up at the Oregon Shakespeare Festival, and that was fortunate to lead her to her own projects, and eventually to director Hana Sharif.

As Miller’s associate choreographer, Bruner spent much of her career as an actor with a focus on classical works.  “I’ve done tons and tons of Shakespeare plays.  I also ended up at the Oregon Shakespeare Festival, which is where [Miller and Bruner] both met.  I’m a director, as well, and [Miller] and I have collaborated and co-created a few things, as well.”

As a real-life married couple, both Miller and Bruner make a conscious effort to balance both their work and relationship at home.  “It’s incredible,” Miller began. “I don’t know whether our relationship is unique to other people working together and our partners.  We have a wonderful dynamic and we are constantly working on the work and home-life balance.  We try to leave work at work when we come home.”

Bruner added, “We, I think, met working together, so we met each other artistically first. Our very first crush was an artistic crush and that surprisingly grew into something else.  So, I think we are very comfortable with our work and obviously comfortable in our relationship, as well.  The work/life balance is something we are both very serious about and we try hard not to talk about work all the time.  And we are both fortunate that we get to work and sometimes travel together, like for this project.”

Miller continued, “There’s no one I respect more as an artist and a human than my wife.  So, to have the honor and privilege to be in the same room every day and learn how [Bruner] views the theater and the world is a pretty spectacular thing.  I’ve learned an endless amount.”

For more information on the upcoming performance, please visit: https://www.centerstage.org/