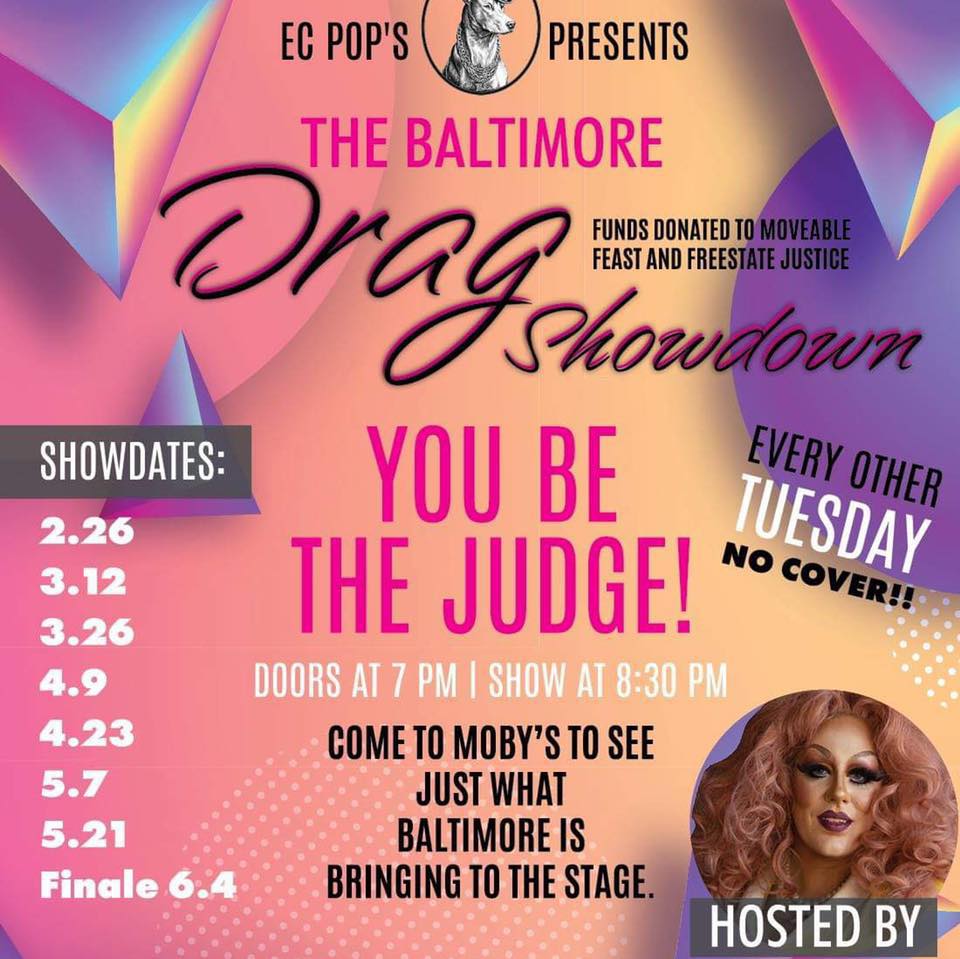 As explained in Baltimore OUTloud’s previous article a few weeks ago, EC Pops in Fells Point has partnered with Moby’s (721 South Broadway, Fells Point) to host the Baltimore Drag Showdown. This unique competition features 12 talented Baltimore drag performers taking to the stage to compete for the chance to win a grand prize of $2,000. The brainchild of the owners of EC Pops – Doug Yeakey and Lance Sovine – the two wanted to do something to help bring community, camaraderie, and competition to Baltimore. With their next event scheduled for Tuesday, May 7th at Moby’s, Baltimore OUTloud recently chatted with Yeakey about the competition.

Frankie Kujawa: So what is the “Baltimore Drag Showdown”?

Doug Yeakey: It’s a contest to showcase the great talent in the Baltimore drag community. At each performance, there is a winning queen and then the bottom two must then lip-sync for their life. Tips determine who wins and which queens are in last place. It’s a 16-week competition with performances every other Tuesday evening. The finale is going to June 4th where the winning queen will be awarded the title, crown, and a $2,000 prize.

What was your inspiration for creating such an event?

We created the event with two things in mind. One was to give our community a great show that they could participate in, and the second was to do something good. EC Pops has always believed in “doing good.” In Ellicott City, we partnered with Blossoms of Hope to raise almost $6,000. Here we are raising money for Moveable Feast and FreeState Justice. At each performance, 15% of the bar proceeds is donated to these two charities.

The showdown seems to be a success. What’s the response been like from the community?

The response has been great! People who have attended have been coming back to see the following shows. Our hostess, Bambi Galore, and the performers have been doing a great job of entertaining the crowd. Plus, we think that once people know that they are doing good for the charities, that gives them a further incentive to come back.

You’ve partnered with Moby’s for this event. What’s that like being partnered and being neighbors with your businesses so close?

Moby’s is a great partner! The entire team from the owners George and Pete to the bar staff and door staff are super. Plus, it helps to strengthen the community when businesses work to help each other.