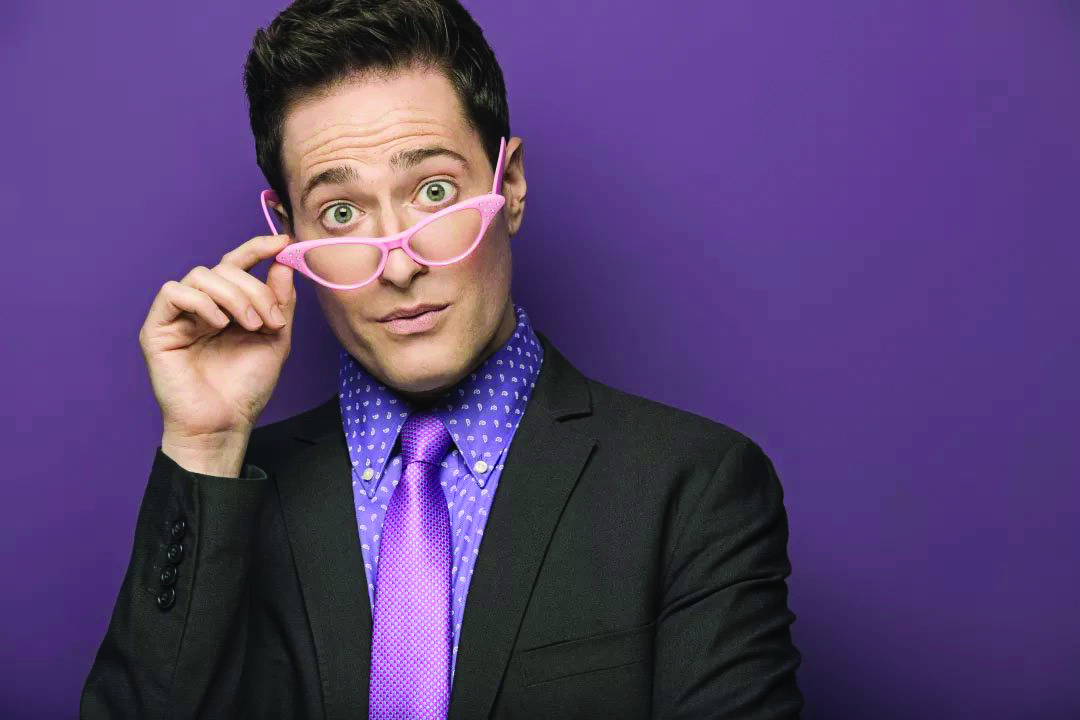 Look out Mariah Carey! Randy Rainbow has released a Christmas album that rivals yours. Hey Gurl, It’s Christmas (Broadway Records) has everything you want to unwrap in a Randy Rainbow holiday recording. The title track, co-written by Rainbow and Marc Shaiman, is seasonally sassy, combines a sense of humor with the spirit of the holidays. Rainbow’s take on “I Saw Mommy Kissing Santa Claus” features Kathy Griffin and Alan Cumming playing his shrink. Norm Lewis joins Rainbow for the more straightforward “Merry Christmas Darling / What Are You Doing New Year’s Eve” medley, which is followed by the hilarious “My Favorite Things” parody number “Trump’s Favorite Things” featuring Trump impersonator John DiDomenico. And all of this is before Rainbow is joined by Lorna Luft on “Santa Claus Is Coming to Town.” Randy was kind enough to answer a few questions in advance of the release of the album.

Gregg Shapiro: Randy, what would you say are the challenges and rewards of writing a new Christmas song, such as the title track of your new holiday album Hey Gurl, It’s Christmas?

Randy Rainbow: I found limited challenges. It was only rewarding. It was exciting for me because I got to work with Marc Shaiman who is a great idol of mine. We sat in the room where he wrote Hairspray and Smash and Mary Poppins Returns, among other amazing things. It was really exciting. If there was a challenge … I originally set out to write the gayest Christmas song we possibly could, as I told Marc. I realized, as I was writing the lyrics, that I wanted to add some substance and some kind of angle to it. I ended up gearing it more towards my specific audience, which is like so many people, consumed with news and social media. It became my musical prescription to dial it back for the holidays and enjoy yourself a little bit.

Being a Jewish songwriter yourself, why do you think so many of the best and most enduring Christmas songs, such as “White Christmas,” “The Christmas Song,” “Silver Bells,” “Winter Wonderland,” “It’s the Most Wonderful Time of the Year,” “Rudolph the Red-Nosed Reindeer,” and “I’ll Be Home for Christmas,” were written by Jewish composers?

Because we know we’re going to get paid at the end [laughs]. It’s an interesting thing. As a Jewish writer person, I don’t know if I can be objective about that. For some reason it’s in our DNA that we write good Christmas music. Maybe (it’s because) there’s no pressure. We’re kind of removed from it enough to just have a good time and write something that’s creatively satisfying. We’re not thinking about all of the other mishegas.

It’s amazing! That’s been one of the most thrilling parts of getting some notoriety. Getting to connect with so many of my heroes. This was the first opportunity to present that in a concrete sort of way in that I got to collaborate with them. The fact that they all said yes as soon as I asked them was mind-boggling to me. These are people who have been heroes of mine for many years, so to be associated with them on any level is a thrill.

Di Domenico can be heard on your brilliant parody song “Trump’s Favorite Things.” Have you heard from the Trump clan regarding any of your parodies of them?

The actual Trump clan? I’ve not heard from anybody. I’ve not even been blocked yet on Twitter, although I try every day. I have heard from some whistleblowers that I do have fans within the administration. I’m assuming it’s Melania, although I have no concrete evidence.

You also perform a more straightforward renditions of “Merry Christmas, Darling /What Are You Doing New Year’s Eve?,” “Make Someone Happy,” and “The Christmas Movie Medley.” How important was it for you to show that side of yourself?

It was very important to me, but more important to my mother, who relishes mostly in the compliments that people like my singing. To have the opportunity to showcase a little more of the non-comedic part of that was very nice. Kind of my Hanukah gift to her.

I had the pleasure of catching your live show at Parker Playhouse in Fort Lauderdale in December 2018.

My mother was there!

You have a series of concert dates through January. What are the challenges and rewards of making the Randy Rainbow experience a live one?

It was kind of a challenge at the beginning to figure out how we would translate this video experience that people were liking to the live stage. It was kind of easy for me because I started out on stage. As a kid, when I was in Florida, I was playing shows on the condo circuit and doing regional theatre. I was familiar with that format. It was a challenge to find a team to work with me. I found my musical director, Jesse Kissel, who did a great job in taking the arrangements that I threw together for myself for the videos and turned them into live musical experiences. I have a great band, some of Broadway’s best musicians, behind me. It brought it to a new level and added a new layer to what I was already doing.

At that concert, I purchased a Randy Rainbow for President 2020 t-shirt. What can you tell the readers about your platform as a candidate?

My platform is really just selling merchandise. So, I’m glad it worked, and you bought a t-shirt. I don’t know if we really want me to run for president. You never know what could happen. To be slightly more serious, I hope that if I’m doing anything with these videos, it’s injecting a little bit of humor and levity into these dark times. I hope that people remember to laugh as much as possible.

Finally, congratulations on having received a 2019 Emmy Award nomination in the category of Outstanding Short Form Variety Series. Is it, as they say, an honor just to be nominated?

No, I should have won. [Laughs] James Corden is always stealing my shine. No, it was an honor and it was insane. I make these, I’ve made them for almost the last decade from my living room. To cut to the front row of the Emmys, sitting next to Jimmy Kimmel, and to have lost to James Corden was surreal and a thrill. But next year I better win!