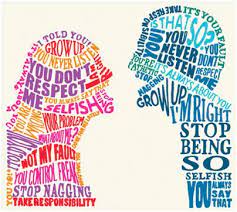 There exists a generalization that what creates conflict or an argument between partners typically involves money or sex. There is often much truth to this, but daily life brings all kinds of topics and situations that create conflict between people. So, is it human nature that we bicker or have a verbal fight? Even identical twins who grow up in the same family end up having differences in opinions, beliefs, expectations, or preferences.

So, if conflict cannot be avoided, what is the best way to deal with it? I have heard people claim that they “never” fight. That tells me that at least one person avoids conflict and so staying silent is how life goes on. It is healthy and even enriching to have conflict. It is how we learn about each other, how we grow the relationship and strengthen the connection. But this is only when the conversation (fight?) is handled in a positive and constructive way. Calling each other names deteriorates the interaction. Of course, anger shows up pronto. Take a look at what you think of anger. Is it a bad thing to avoid at all cost? Is it OK to be angry but express it without insult? If the latter applies, you are on a good path.

What are the skills that make for a healthy way to resolve a disagreement? First and foremost, do not ignore the problem. Set a time and place to zero in on clarifying what the issue is. Discuss it and by all means, LISTEN. Much of what causes misunderstanding comes out of not listening. If you are thinking of what you want to say next, you are not listening! Then see if you can find an agreeable solution. Later, do take the time to follow up on how things are progressing. These steps apply whether it is partners, parents and children, or coworkers in an interaction.

“Peace is not absence of conflict, it is the ability to handle conflict by peaceful means.” ~ Ronald Reagan