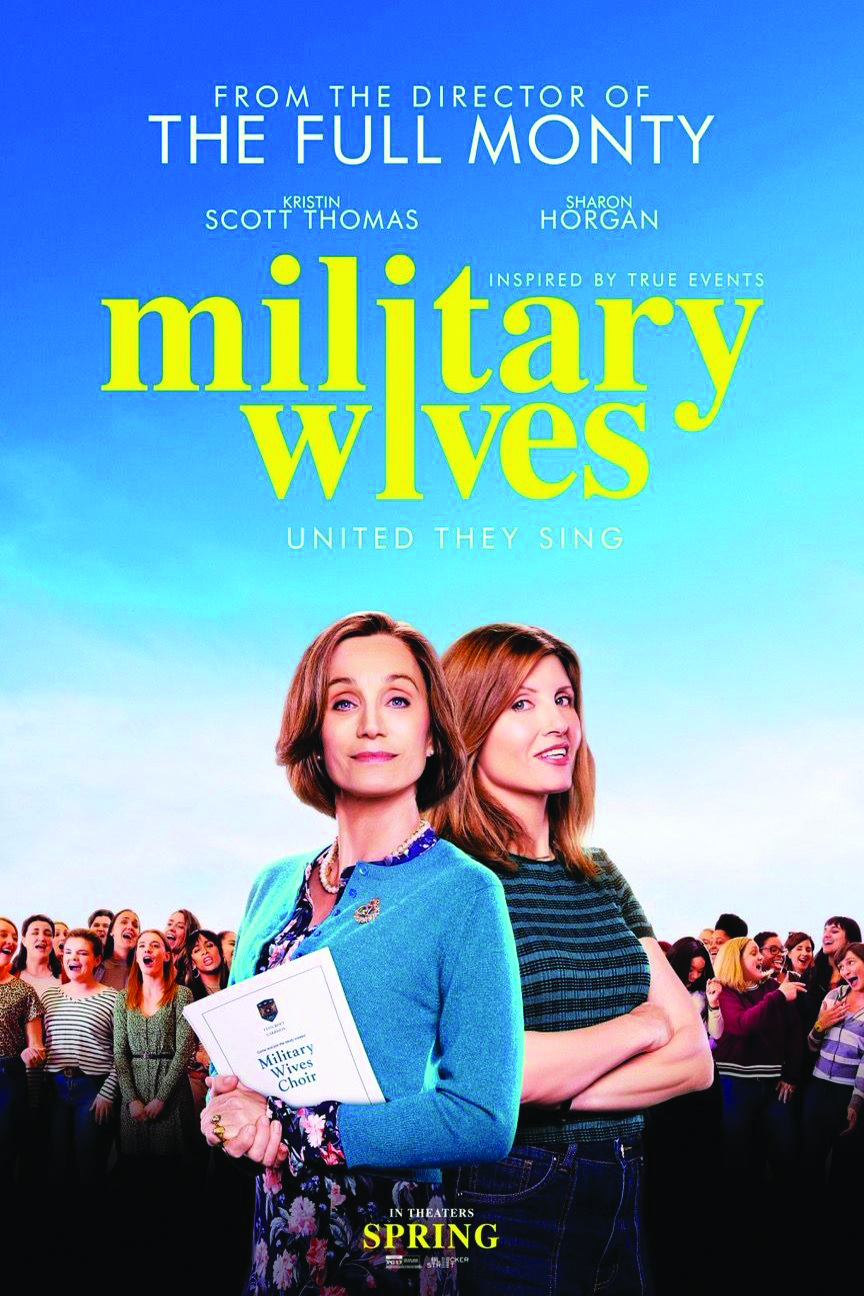 “Inspired by the true stories of the women who started the first military wives choir,” director Peter Cattaneo’s Military Wives (Bleecker Street), and its on-the-nose title, comes from a long tradition of movies that also includes Cattaneo’s full-length feature debut The Full Monty. In the same category, you will also find Calendar Girls, Kinky Boots, Brassed Off, Pride, and even Sister Act. Have you figured out where this is going? That’s right, an unlikely and often motley crew comes together during an extremely challenging time to lift each other’s spirits and leave the audience in tears.

Kate (Kristin Scott Thomas) is the tightly wound and privileged (or so she thinks) wife of a colonel, living at the Flitcroft Garrison. She’s all business and bossiness, hiding behind a facade following the death of her soldier son Jamie in Afghanistan the previous year. Now her husband Richard (Greg Wise, husband of Emma Thompson), on his fifth tour of duty, is heading out for a six-month deployment.

Left behind with the other wives, Kate likes to throw her weight around, but she may have met her match in Lisa (Sharon Horgan, soon to be seen in the gay-themed movie musical Everybody’s Talking About Jamie), the wife of a sergeant major, who works as a cashier at the commissary. Lisa, who has been put in charge of organizing activities for the wives doesn’t meet Kate’s approval and she begins to offer her unwelcome suggestions.

Eventually, all the wives settle on singing together in what Lisa calls a singing club, but that Kate would prefer labeling a choir, which is less popular with the women. Lisa and Kate’s differing approaches to the concept brings about lots of head-butting. Nevertheless, they begin to pull it together.

But life on the base is not without its share of traumas. Lisa and teenage daughter Frankie (India Amarteifio) are constantly at each other’s throats. Sarah (Amy James-Kelly), the young wife of one of the soldiers, is widowed. Kate numbs her pain with binge-shopping online.

However, there is light at the end of the tunnel, discovered while in a tunnel when the wives’ group hike is sidelined by a rainstorm. They find their musical groove and begin to improve. When one of the higher-ranking officials overhears one of their considerably upgraded rehearsals, he decides to invite them to perform at Royal Albert Hall as part of the annual televised Festival of Remembrance. But they still have a long road ahead of them, including the creation of an original song (Lisa’s idea).

As manipulative tearjerkers go, the disappointing Military Wives doesn’t hold anything back. Nevertheless, there are some pleasant surprises here, such as the inclusion of the wife of a lesbian soldier. Thomas, who is usually reliable, doesn’t have much to work with here, but Horgan really shines, giving a powerful, if pat, performance. Military Wives can be seen via VOD and Hulu beginning on Memorial Day weekend 2020.