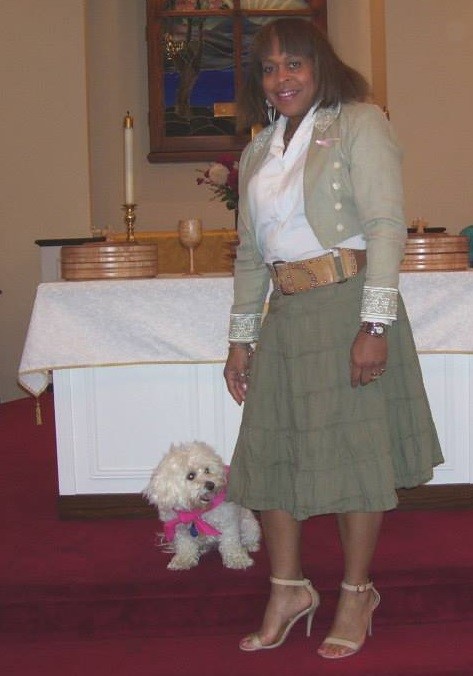 My life as a Christian changed when I transition back on October 1, 2010. The following Sunday I had to face the toughest decision since my transition, whether to go to church again. The church that I was attending I loved, because it was the church where I gave my life to Christ. Back in my earlier days I use to be a DJ on the side at parties and make 8 track and cassette tapes. Ok, I’m really giving my age away and yes, I am 63 years young. Anyway, God drew me to him through music. I knew my old church wouldn’t accept me being Transgender, but I went a couple of more times anyway before I decided which church to go to. I knew it wouldn’t work for me since I transition, and it was against what the church believed.

A couple of months later I joined Twinbrook Baptist Church, being led by Pastor Jill McCrory. Since my first day at Twinbrook, I felt nothing but love from all the parishioners. I was very much involved as much as I could, with events that the church was involved with. Whenever I missed church on a Sunday, someone was calling to check up on me, or when I return the following Sunday, people were asking me if I was ok.

A few years later, I also attended another church called Restore Church in Silver Spring, MD under Pastor Aaron Thomas and First Lady Kerrie Thomas. I went to Restore to support a friend who was also a Transgender woman and coming out to the church for the first time. The Pastor and his wife were supportive towards my friend. Later that morning they learned to know from my friend I was also Transgender, but they didn’t care. Every so often I would attend their service, that didn’t interfere with going to Twinbrook. Restore would even invite me to all types of events that the women of the church invited me too. Later the women realized I was Transgender, but they didn’t care. My time at Restore I grew to love everyone there and they loved me. I started attending another church as well, called Rockville United Church under Pastor Scott Winnette on the same Sunday’s which also didn’t interfere with Twinbrook and Restore. A few months later, I was going to just two churches after Twinbrook closed. Unfortunately, I had to leave Restore because they changed their service time from 4:30 pm to 10:00 am. Now, I can only attend Rockville United.

At Rockville United Church, I was welcomed with open arms and hearts. Rockville United has shown me so much love and support for who I am and the support with the Transgender Community. They have cared so much for me and my safety, which led them to buying me a bullet proof vest. The reason they brought a vest for me is for my safety whenever I would do volunteer ride a-long work with Prince George’s County Police when talking with the Transgender Sex Workers in Fairmont Heights, MD. This area in 2019 was where two Transwomen were murdered. Recently I was asked if I would be interested in being on the church council overseeing security for the church. Hopefully I will be voted in next month.

I must say that I have “Loved” all my churches I’ve attended, past and present since my Transition. All of them have poured out so much “Love” for me. I truly have been Blessed, by them all, and I wish every Transgender person could experience what I have by the churches I have attended.

You can find me at kkholmes@kkholmes.com or visit my personal website at http://www.KKHolmes.com In my next article I’ll talk about “Life With My Family Today”. Until then Shoot for the Moon and even if You Miss, You’ll Be Among the STARS!