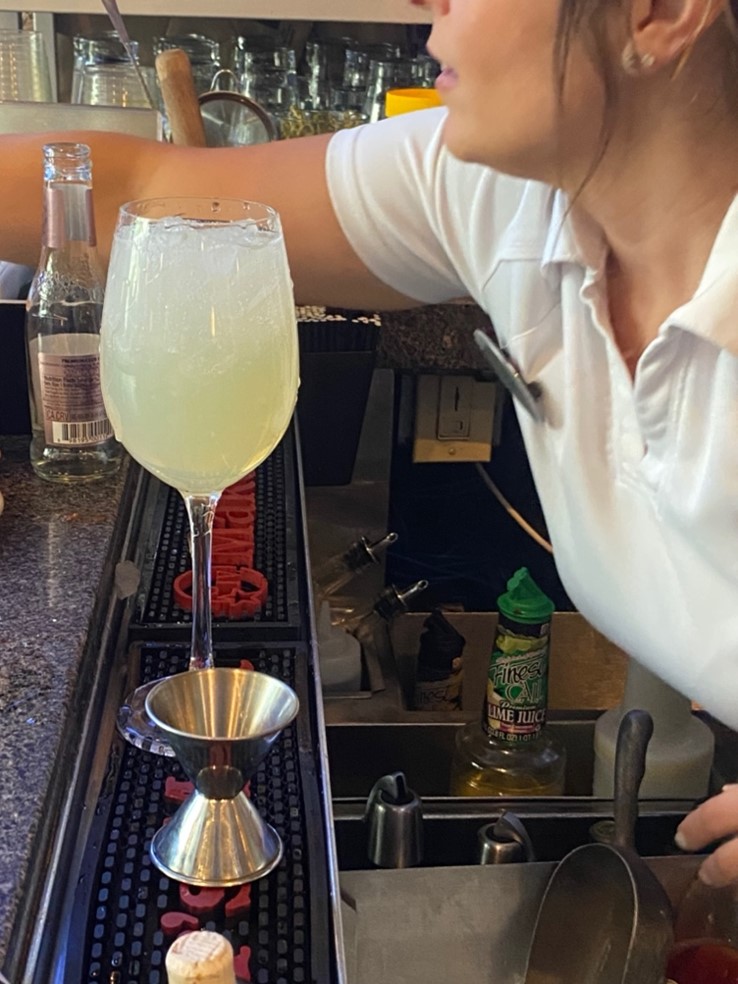 Being an Ernest Hemmingway fan, I asked a bartender named Jenna, kind of pictured above, if she knew what Death in the Afternoon was. She had been bartending for twenty years and had never heard of it. So, we did what every red blood American does, we googled it. Ernest Hemingway is known as much for his writing as for his drinking. Through his books and throughout his life, he championed cocktails like the Daiquiri and the Mojito, but nothing stirs the imagination quite like the Death in the Afternoon. Here’s to Hemingway for inspiring me to write today.

BY THE WAY, pour one jigger absinthe into a Champagne glass and add iced Champagne until it attains the proper opalescent milkiness. It has a taste of liquorish (Licorice) which I hate but, bottoms up anyway.

I write for many reasons, to socialize, let off a little steam, celebrate, but mostly for the past ten years, I drink to quell the pain. Yes, I drink to get drunk. At least I use to, however, that had completely subsided until a month or so ago when it began creeping back into my life. That is until a few days ago when I had a seismic shift and suddenly, I didn’t feel the need to be intoxicated. Today I was drinking just to unwind. Big difference because of intent however, I did go a little overboard and wound-up drinking 1 Death in the Afternoon, 3 Lemon Drop Martini’s, 2 Chocolate Martini’s and an IPA.

We all deal with our stresses in different ways. At the height of my drinking, I was drinking about ¾ of a fifth a night. My tolerance is now three or four shots, and I am done, compared to about ten to twelve shots and then passing out. Yes, my liver is happier.  Like many, stresses are my biggest issue in my life. Recently my life has once again has been turned upside down.

You see I am moving to Houston after being in Louisiana for twenty-two years. And I am going from about ten thousand square feet, house and office, down to fourteen to sixteen hundred. No, I didn’t see that coming and yes, it’s a good thing. I am hoping and think in the end, it will be one of the best things that has happened to me and my wife. But until everything shakes out it has been very unnerving for me.  Even to the point of suicidal thoughts creeping back in from my insecurities.

The shift happened when I was on a zoom call, and I snapped. It wasn’t a big over the top snap, but I did use a colorful couple of words that was inappropriate. But when you push me sometimes, I push back. While it has been many, many, years if ever at all since I used the f-word in business, there it was, and I am unremorseful about it. Because it grabbed me by my shoulders and shook me saying, “What the hell are you doing? This is your project, take back control.”

It cleared my brain and I really needed that. However, I hope it didn’t kill a budding friendship. But it may have and for that I am sorry. Life is full of ups and downs and if you trust it the universe will always provide as long as you listen. I am starting to listen again.

I am queen of my destiny, and the ruler of my kingdom. (Well with my wife’s approval, LOL.) Anyway, today I celebrate a new journey into uncharted lands. For I am a transwoman moving from a very red state into another very red state. (Although Houston I am told, is somewhat progressive. I hope so.) So, the journey beings, but not until I get a couple of properties ready for sale. Cheers and as always love, light, and peace. Sophie