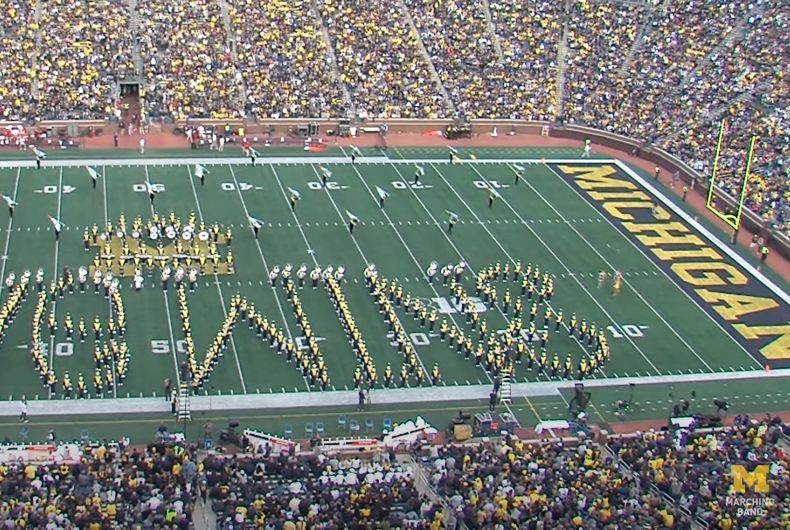 Ann Arbor, MI – Bil Browning write for LGBTQ Nation that the University of Michigan Marching Band brought fans to their feet with a rousing performance in honor of the LGBTQ community and a local queer resource center. The medley of popular songs associated with the community had fans cheering for LGBTQ rights and noting that love always wins. The show took approximately eight months to plan and includes hits from Lady Gaga, Madonna, Cyndi Lauper, Sister Sledge, Kim Petras, Whitney Houston, Diana Ross, and the theme song from the Golden Girls.

“The point we were trying to make is that love is love. And love wins,” band director John Pasquale told the media. “We are unequivocally supportive of our students and [we] just wanted to make as public of a statement in that regard as possible, and we put the show in the biggest performance venue in the world that day,” Pasquale said. “So, I think it was a pretty strong statement.”

The show honored the 50th anniversary of the Spectrum Center, which “works toward enhancing the campus climate and support services for LGBTQ+ students, staff, and faculty at the University through education, advocacy, and community building.” Spectrum was the first LGBTQ college support center in the nation. (LGBTQ Nation – Bil Browning at https://www.lgbtqnation.com/2021/09/university-marching-band-blows-fans-away-halftime-show-support-lgbtq-rights/?utm_source=LGBTQ+Nation+Subscribers&utm_campaign=d1739d6688-EMAIL_CAMPAIGN_2021_10_02_04_03&utm_medium=email&utm_term=0_c4eab596bd-d1739d6688-433273132)