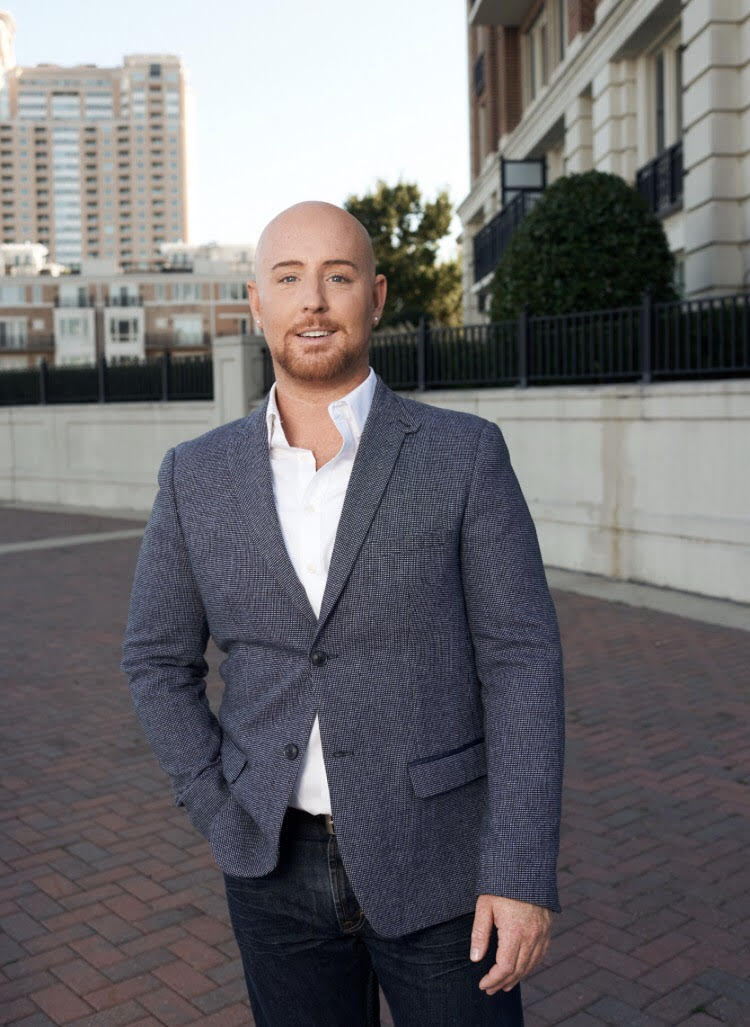 of The Transgender Manifesto, once wrote, “Makeup can be used to express yourself, as well. Those experiences should not be limited to women. Everyone should be free to be as colorful as they want to be.” The spirit of this quote is evident in the work of Baltimore makeup artist Owen O’Donnell. Baltimore OUTloud chatted exclusively with O’Donnell to discuss his upcoming cosmetics line, his affinity for Baltimore and how he channeled his passion into a full-blown career.

Growing up in the heart of Baltimore, O’Donnell’s creativity had already begun to blossom at an early age. “I was already very artistic as a child, but I didn’t have great skin and had some weight and confidence issues during my adolescence. My mom and dad realized I wasn’t into sports. So, my mom helped me to get involved with a local theater program. I was scared at first, and didn’t want to be on stage. So, I helped with the costumes behind the stage.” This opened a whole new world up for O’Donnell. “It brought me out of my shell, and within a week I had a speaking role in the show.”

Not too far from that theater, O’Donnell ventured to the local library where he came across a book by famed makeup artist Kevyn Aucoin. “Something just ‘clicked’ when I read his story at the time. I realized that you could be a successful makeup artist without having to go to Hollywood.” Though it remained a dream for the then 12-year old, it didn’t occur then to O’Donnell that makeup and fashion could be a full-fledged career. He eventually went off to the School of Fashion Design in Philadelphia and focused on a career in fashion merchandising. One of O’Donnell’s first jobs doing makeup was working a basic cosmetic retail job in downtown Philadelphia. “It was an ‘aha’ career moment for me. What clicked was I enjoyed what I was doing. I realized that you can play with makeup and change someone and empower them. You can get a pay check for doing something that you love. I thought that work would be hard, but once I realized this was a career path my entire mind-set changed.”

O’Donnell reflected on how, at the time, Baltimore didn’t have much to offer in the field of cosmetics. “We had a little bit here, but it’s greatly expanded. Not that it was long ago, but the 90s were like the ‘Dark Ages’ for Baltimore. Since then, commerce has greatly expanded. We now have areas like Harbor East and many of the stores there. There weren’t many art schools in the area at the time, and MICA was 10% of the size it is now.”

Eventually, O’Donnell settled on Baltimore as his home base. “I didn’t start to have success, or feel like I was making any progress, until I accepted Baltimore is where I belong. The second I did that was the second that things started to change. Sometimes, you just have to love the one you’re with,” he laughed. O’Donnell believed that Baltimore’s central location is what lends itself to be a perfect place to work. “Washington, New York City, the beach, the mountains – all these places are great for photography for filming purposes. We have great neighborhoods and bad neighborhoods. All that comes together and just makes it feel right to be here. I would rather be here trying to make the most of Baltimore, and be on the cusp of what’s about to happen here, then be just a flash-in-the-pan in New York or Los Angeles.”

An official makeup artist and licensed esthetician, O’Donnell’s career has continually soared to new heights. With strong work ethic, he eventually became the beauty editor for Baltimore Style magazine. He’s a regular fixture on many Baltimore TV news networks, both on and behind the camera. He’s gone on to teach at local beauty schools and continues to do event planning, as well. As a business owner, O’Donnell has now taken on the task of launching his own cosmetics company.

“With my doing the cosmetics line,” O’Donnell began, “there’s a lot that definitely goes into that. I do so many projects in many different directions. I want to tie that all together and give something that would benefit young makeup artists or hair stylists just starting out. Something that would inspire others, and pull many of the things that I have scattered throughout the year together.” O’Donnell went on to discuss the different channels within his cosmetics company. “There’s an online / marketing side, the direct sales side, a small team of artists that are using the products, some salons that I’ll be involved with will be selling and using them, and some stores that may be carrying some different options. One store, in particular, may be carrying a different selection of my lipsticks with some hand creams, as well. This will be expanding into DC and Philadelphia, too.”

His appreciation of Baltimore is weaved throughout his work. “The lipsticks that are in my line have Baltimore names. I’m all for being very Baltimore-centric.” O’Donnell then added, “You can do things more affordably here, and I hope that we get over the stigma that this is just an affordable place.” O’Donnell added that there are talks, in the very early stages, to do some paid TV spots that would differ from what you see normally on the news. “We’re in talks to do some reality segments, like in local salons in the area, that would give local makeup artists and hair stylists a voice. That’s a side project I’m working on right now, and there’s such tremendous opportunity to showcase the best that Baltimore has to offer.” O’Donnell added that he also hopes to join Baltimore’s local Chamber of Commerce in the next month.

O’Donnell will also be assisting the community in lots of ways throughout the year. “I’m on the committee for ‘Twilight on the Terrace’ during Pride this year. This will benefit the GLCCB center. The event will be held on Friday, June 15th at Gertrude’s (at the Baltimore Museum of Art). I’ll be doing the swag bags, as well as reaching out to local vendors.” O’Donnell explained that it is his goal to make this event accessible to all to help bridge the disconnect between the Twilight on the Terrace events and the Pride Block Party. “There are so many well-off and influential people who are either gay or straight-allies who would contribute time, money, and energy, if only they felt valued and welcome to all events.” O’Donnell added that he would like to see these events well received through media coverage from both TV and print magazines in Baltimore.

O’Donnell added that he foresees many positive changes in Baltimore over the next few years. With the launch of his cosmetics line, O’Donnell hopes his creativity and ideas help Baltimore to continue to flourish. “I want to be part of the progress in this city,” O’Donnell added. “I put my work in here, and I don’t have any intention of leaving right before things are about to become great here.” t