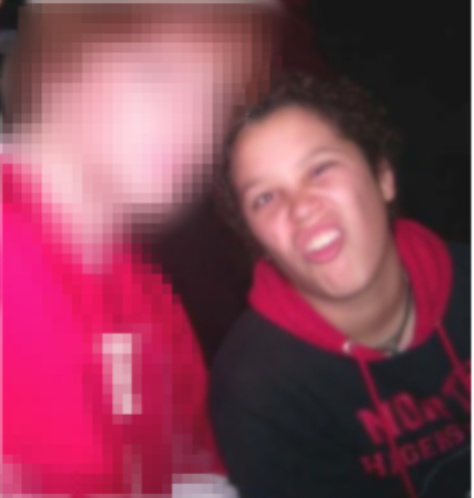 That is 18-year-old me in the picture with my best friend at the time. Before adulthood firmly separated our paths, we went on the adventures of sitcoms. Like most adolescent friendships, ultimately the experiences we go through are what tie us to each other forever. I’ve had the normal share of best friends forever growing up, and while we have all followed different paths, there are parts of our personalities that have been forever shaped by each other.

The blurred face next to me had a flourish of hateful and ignorant rhetoric he needed to shout at my wife via social media about transgender people. And more than the words of our president or every single stranger who has slurred in my direction, his words have sat with me. I know now why he eventually unfriended me long after we drifted apart. Being brothers forever only counted until I realized I was one. If my mother knew those words would come out of his mouth a decade ago, she might not have paid for his trip to the anime convention we all went to.

Part of me wants to lay the blame at the feet of social media. The anonymity for so long of being able to say anything to a complete stranger with no consequences has changed us. I want to believe he would not say those things to my face. That if he saw how his words were hurting me, he would take them back. But I also have the memories of another best friend who did just that, telling me that my transition was merely for attention’s sake. I should be a more rigorous judge of character when getting close to people.

It is social media’s fault. At least partly. I have distanced myself from more than a handful of close friends on account of their social media activity. The toxicity around using social media to vent the frustrations one has within is dangerous. It is a cancer. Enormous physical pain that is being unleashed against transgender youth, who already face adversity. I have three decades of life to help ground me when reading vitriol. I have the comfort and stability that being able to live as myself freely with substantially more support than flack, while kids do not. The reality is that when someone who is already struggling to understand themselves and fit into the strict and rigid social standards of adolescence reads messages of hate directed at “transgenders” in the style of an insult, that sticks with developing brains at a much higher potency than it would if they were to read it later in life. I am not the only millennial who has struggled to make peace with trauma from childhood.

Eventually, the words of my former friend will fade into the gray area of every other brutish thing said in my direction, and I will have moved on. Adult me is aware of the fleeting nature of words and the effects they have on us. But teenage me would have cried for weeks when realizing how someone I thought loved me had turned so sharply in the opposite direction. Over 30% of transgender teens have tried to kill themselves. I wonder how much lower that number would be if we stopped to think about the people who are at the opposite end of the hate we type. I wonder how many lights we have lost due to the hatred and ignorance of others. And while Trump’s ban is now affecting thousands of transgender service personnel, the real damage is happening to the youth who are facing this hatred without the knowledge that the world is kinder and more loving than the words they read.