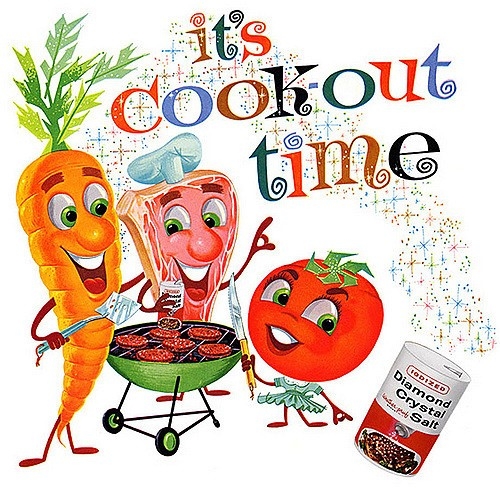 Once when my son was about 12 years old (a long, long time ago) he got cut on the 4th of July while messing around with his buddies at the park and we ended up in the emergency room. This was not uncommon; we were in the emergency room frequently when he was a teen. What I remember about this trip however, was the number of people in the ER that evening puking their brains out because they’d been at a backyard cookout and gotten food poisoning. Now, as a nurse, I have to tell you that it can take up to days to develop symptoms from food poisoning, but this night, people were arriving sick from food they;d eaten a just few hours ago. It was not pretty, and I was really glad I had not eaten at their 4th of July party.

When cooking out, picnicking, or camping, how you handle your food makes all the difference in whether you will eat safe food or contaminated food that will cause food poisoning. Here are some basic safety rules:

• Use a thermometer to check temperatures; you can’t tell just by touching.

• Don’t take meat or other food to be grilled out of the refrigerator or cooler until you are ready to put it on the grill.

• Use separate surfaces and utensils to prepare raw meats and other raw foods as raw meats can contaminate other foods that may be eaten raw.

• DO NOT return cooked food to the same plates they were on when raw.

• Place coolers in the shade; they won’t stay cold enough if you place them in the sun.

• Cook all meats thoroughly, especially hamburgers. Contaminants that can be in ground meats are mixed in to the center of a burger and can cause illness if not killed in the cooking process. Use a meat thermometer.

Have a wonderful and safe cookout season, and for more information about food safety, go to:

P.S. I’ve been meaning to update you about my weight problem. If you remember, my plan was to exercise for 20 minutes five days a week and write down everything I ate. I’ve had some physical challenges and the exercise program has not even gotten off of the ground. But I was able to write down what I putting in my body, and I was able to identify that there were some things that were adding to my weight problem that I could live without. I made a decision to eliminate alcohol except on the rare occasion and to limit ice cream by replacing it with a brand of Greek yogurt that I really like when I needed something creamy and comforting. I’ve lost six pounds without really trying – not dramatic, but definitely going in the right direction. I’ll take it! I’m totally pleased with my non-diet strategy and intend to continue on as planned.

Debbie Anne is a public health nurse with the Frederick County Health Department in Frederick, Maryland. In 2014 she was awarded a Governor’s Citation for her work with Marylanders living with HIV/AIDS.