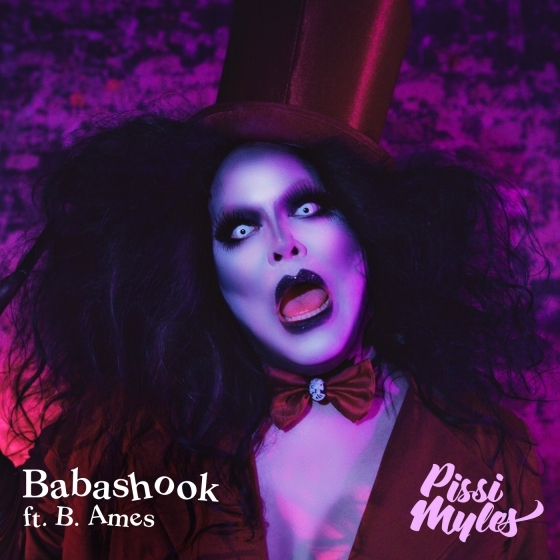 Just when you thought Pissi Myles had done it all, she comes back and surprises us with a fantastic new video on iTunes – “Babashook,” based on the 2014 Australian psychological horror film “The Babadook.” Just released last Friday morning it has already found its way to the tops of the Billboard.com charts. Below is the official press release.

A full-time drag performer and recently featured as a special guest on RuPaul’s podcast, “What’s the T?” Myles has dedicated her career to representing the freak in all of us. “I think queer people have always identified with the isolation and power of the monster or villain in a horror movie, especially when they’re as fabulous as Babadook or Ursula the Sea Witch. As a gay person, there have always been people who made me feel like my actions were wrong or evil, when I knew that I was just pursuing my goals and desires. While many movie villains actually do have bad intentions, I’ve always had an understanding for the villain and their plight for understanding.”

In early June, the internet outed the Australian monster/allegory when a bemused Netflix user discovered the horror flick had been accidentally grouped with LGBT content on the popular streaming site. The glitch set off a viral restorm just in time for Pride, inspiring countless tweets, original art, and several drop dead gorgeous parade looks. When asked why she created the music video Myles said, “My husband and I both love scary movies, so when Babadook “came out” we wanted to bring this new side of the character to life.”

“Babashook” was co-written by Myles and humorist Topher Cusumano, with an original track by producer B. Ames. The video was directed by Joe la Scola with drag photographer David Ayllon serving as creative director.

The video is currently on YouTube and the song is available on iTunes.

You can catch Pissi Myles at Georgies Bar in Asbury Park as she hosts “Queens Against Humanity” alongside Amber Alert.