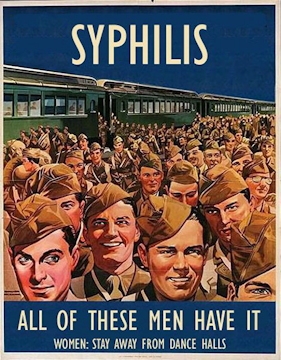 Summer will be here before you know it! Asbury Park will once again be bustling with visitors from all over the Northeast, gay and straight alike. There will be scantily clad men on the beach, the Paradise pool, and on the boardwalk. The Visiting Nurse Association will have its mobile testing unit everywhere around town providing free rapid HIV and syphilis tests. Thanks to the mobile unit and the Prevention Resource Network’s “Superhero” campaign, more and more gay men in town know their HIV status.

What I want to write about is the other testing they offer, the syphilis testing. I know, I know! “Rai, is Syphilis still a thing?” My answer is, yes, very much so. I want to share some facts about this sexually transmitted infection, that more often than not goes untreated because you don’t know you have it.

Fact: Syphilis is a sexually-transmitted infection that can cause serious health problem if left untreated. Syphilis is divided into stages (primary, secondary, latent, and tertiary) and there are different signs and symptoms for each stage.

Fact: Most cases of syphilis in the U.S. are among gay, bisexual, and other men who have sex with men. If syphilis goes untreated, it can cause serious health problems, including neurologic problems, eye problems, and even blindness. It is also linked to an increased risk of transmission of HIV infection.

Fact: Any sexually-active person can get syphilis. Syphilis can be transmitted during anal sex and oral sex, as well as vaginal sex. Syphilis is passed from person to person through direct contact with a syphilis sore. In men, sores can occur on or around the penis, around the anus, or in the rectum, or in or around the mouth. These sores can be painless, so it is possible to have them and not notice them. Correct use of condoms can reduce the risk of syphilis if the condom covers the sores. However, sometimes sores occur in areas not covered by a condom. It is still possible to get syphilis from contact with these sores. You cannot get syphilis through casual contact.

Fact: A person with primary syphilis generally has a sore or sores at the original site of infection. These sores usually occur on or around the genitals, around the anus or in the rectum, or in or around the mouth. These sores are usually (but not always) firm, round, and painless. Symptoms of secondary syphilis include skin rash, swollen lymph nodes, and fever. The signs and symptoms of primary and secondary syphilis can be mild, and they might not be noticed. During the latent stage, there are no signs or symptoms. Tertiary syphilis is associated with severe medical problems and is usually diagnosed by a doctor with the help of multiple tests. It can affect the heart, brain, and other organs of the body.

Fact: The number of reported primary and secondary cases in the U.S. have increased by 19%, and 60% of these cases were among men who have sex with men.

Fact: In the U.S., approximately half of MSM with primary and secondary (P&S) syphilis were also living with HIV. In addition, MSM who are HIV-negative and diagnosed with P&S syphilis are more likely to be infected with HIV in the future. Having a sore or break in the skin from an STD such as syphilis may allow HIV to more easily enter your body. You may also be more likely to get HIV because the same behaviors and circumstances that put you at risk for getting other STDs can also put you at greater risk for getting HIV.

In short, “Aunt Phylis” is a messy, messy lady! Get tested. Get treated. Get rid of her if she comes around. I’ll see you around the neighborhood!