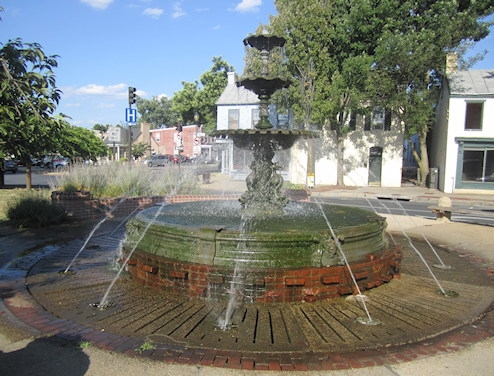 Looking for adventure the whole family can enjoy? Look no further than “Gulliver’s Travels in Space,” an original musical produced by Maryland Ensemble Theatre, in collaboration with the Ensemble School and Frederick Community College. Gulliver longs to travel the universe, but he’s stuck at home with his dad and uncle. Desperate, Gulliver stows away on his uncle’s spaceship, but he soon realizes the universe may hold more dangers than he expected. “Gulliver’s Travels In Space” runs August 4th to 13th. Visit Marylandensemble.org for show times and ticket prices.

Want to see old-school penny-farthing bicycles – you know, the ones with the tall, skinny wheels – take over the city of Frederick? Then you won’t want to miss the National Clustered Spires High Wheel Race on Saturday, August 13th. It’s the only one of its kind in the U.S.! Visit Highwheelrace.com or call 301-514-5172 for information.

What’s a penny-farthing race without an accompanying steampunk convention? Steampunk Frederick, Maryland, is a weekend-long event (August 12th to 14th) that includes a bar crawl, improv comedy, information panels and a vendor hall, concerts, a beer tasting and much more. Visit Steampunkfrederick.com for tickets and more info.

Taste Frederick hosts the Market Street Food Tour – a three-hour guided walking tour of the best of Frederick’s specialty market and restaurant scene. In between delicious bites and delectable drinks, you’ll learn more about downtown Frederick’s history and architecture. Tours run throughout August. Visit Tastefrederickfoodtours.com for times and tickets, including a web-specific discount.

History buffs won’t want to miss the Historic House Series: Thomas Farm Open House on August 20th and 21st, 11 a.m. to 4 p.m. The Thomas Farm experienced heavy battle during the Battle of Monocacy. Historians, rangers, and volunteers will be on-site to answer questions and help visitors explore. The open house is free. Learn more at Nps.gov/mono/planyourvisit/event-details.htm?event=9AA7FB1D-1DD8-B71B-0BFE4A19AB02CC6F.

Inebriated History of Frederick brings hooch and history together for one night only! On Friday, August 26th, the Comedy Pigs liven up the old Frederick News-Post building with skits, trivia, and more to tell the history of our fair city. Tenth Ward Distilling and others will provide drinks and grub beginning at 7:30 p.m.; the show begins at 8:30 p.m. Ages 21 and up only. Tickets and more information at Downtownfrederick.org/calendar/events/view/2723/redirTo:L2NhbGVuZGFyL2V2ZW50cy9pbmRleC8yMDE2Lzg

Heat things up with “The Heat is On 5K and Fun Run” in downtown Middletown, Maryland on Saturday, August 27th. Starting at 8 a.m., this route will take you through 249 years of history, past lovely Appalachian Mountain views. All ages welcome. A portion of the proceeds benefits Middletown Valley People Helping People. Registration is $25. Register and learn more at Active.com/middletown-md/running/distance-running-races/2nd-annual-the-heat-is-on-5k-and-fun-run-2016.

You’ve never attended a movie night quite like this! The National Aviation Community Center hosts a showing of Planes: Fire and Rescue in an airplane hangar, complete with free hot dogs, popcorn, and soda. You’ll even have the opportunity to climb into the pilot’s seat of a plane or flying a flight simulator. Bring the whole family on Saturday, August 27th from 6 to 9 p.m. Learn more at Aopa.org/community/events/2016/august/27/movie-night.