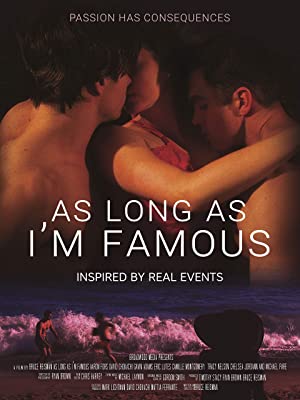 Just in time for June’s Pride month, Broadwood Media’s As Long as I’m Famous is streaming for audiences worldwide on Amazon Prime. The interpersonal relationships of stage and screen stars from postwar Hollywood and Broadway’s Golden age are explored through the 24-year-old eyes of future legendary director, Sidney Lumet (played beautifully by the charismatic Aaron Fors). The film is a fact-based account of a New York summer in 1948, where future luminaries such as Montgomery Clift (played by the handsome Gavin Adams) and Lumet embark on perfecting their craft during their early rise to fame.

Baltimore OUTloud recently chatted with the film’s writer, director and founder of Broadwood Media – Bruce Reisman, regarding the film’s Amazon Prime release, Broadwood Media’s stance on LGBTQ inclusivity and how current events are changing the entertainment industry for the better.

In As Long As I’m Famous, Reisman pays homage to several movie genres, from classy-sassy George Cukor’s Dinner at Eight, Bob Fosse’s Chicago, the black and white noir boxing pictures of John Garfield, and the more recent Marvelous Mrs. Maisel, evoking other times and places, whose virtues and humor are as accessible today as they were in the 40’s and 50’s.  Consider, if you will, a thinking man’s Hollywood.

As Reisman’s factual story of life ‘behind the curtain’ unfolds, the friendship between Monty and Sid evolves into something neither of them expected; crossing what Reisman’s screenplay presents as a very thin line between bromance and “shirtless schmecking (making out)”, as the writer puts it. The chemistry between actors Aaron Fors (Sid) and Gavin Adams (Monty) smolders on screen. Fors’ star-making performance really holds the film together.  The intimacy between these two, rugged young men depicts a love that is both romantic and normalized by its very existence.  “It just so happens that the audience gets to be a fly on the wall to play witness to all that friskiness of the flesh,” says Reisman.

However, As Long As I’m Famous, is not a “gay movie”.  The Sid-Monty storyline is woven into the other real peoples’ private lives of that Golden Age.  David (Cody Madison of Baywatch fame) portrays championship boxer, Gene Tunney who is in and out of rehab while carrying on a secret love affair of his own.

“The nature of show business and all arts is complete diversity, especially in regard to the gay community,” Reisman began.  “A good portion of actors, artists, writers, producers, and directors are gay or bi, open or closed, and range from flamboyant to not.  Everybody sort of cohabitates together as if there is no difference.”  Growing up in California, Reisman was raised that way in the business.  “I started very young.   I lived in the ‘Woodstock World’ where sexuality, diversity and experimentation were a badge of honor.”

Reisman is founder of Broadwood Media, the company which produced As Long As I’m Famous.  It was important for Reisman’s production company to be inclusive, including LGBTQ stories.  “In my opinion, my generation should be the least judgmental. When I write, I don’t even think in terms of sexuality, but I felt that many writers and films didn’t always have that mindset.  There was a time that many stories were not written by people who were diverse. A gay writer would write a story such as the film, Making Love (1982) which was a groundbreaking movie. But it was slanted towards a general audience, so It made it a big deal about who these people loved and therefore, presented the gay men as either messed-up, confused, or ruining lives by infidelity.  Straight infidelity is a bummer too, maybe worse.  A woman leaves her husband for a woman, it’s actually less painful for the man.  No competition.  It still hurts like hell, and betrayal is betrayal.”

“I just feel it is a lot more fun to have different types of people, especially with sexuality, because sexuality really sort of runs your freedom quotient.” Reisman added, “When I was doing As Long As I’m Famous I was writing a love story that really happened between Montgomery Clift and this young man, Sidney Lumet; the latter would become this very famous man who married four times.  He was once married to Gloria Vanderbilt.  But in this specific summer of 1948, he had this intense relationship with a man.  Sidney, may he rest in peace, told me himself in 1979.  They all spoke freely after knocking back a couple of martinis because no one cared. The only reason they kept it under wraps was because they felt the country at the time would care, and unfortunately, the country did.”

“The country, and the film industry at the time, didn’t want to produce mainstream gay movies and they didn’t want to carry mainstream black movies.”  Reisman explained, “Hattie McDaniel went to the Academy Awards and had to sit in another room before she won the Oscar in 1940.  Dorothy Dandridge once stuck her toe in the Flamingo Hotel pool, and they drained it. It’s the same thing with the LGBTQ community; people are terrified of what they don’t know.  So, what I try to do is I just write a love story regardless of the race or gender.  As Long As I’m Famous takes place in 1948 where the secret was in the sexuality.  But in my new film Last Call in the Dog House, there is absolutely no mention that the gay characters are gay.  That’s how Broadwood movies will portray diversity, as if it doesn’t exist.”

Reisman spent a lot of time utilizing resources for this film.  “I did so much research for As Long As I’m Famous because I wanted to make sure it didn’t look like anything I had ever seen before. I must have watched about forty American and Foreign LGBTQ male love stories.  They’re uniformly awful.  And I said to myself, ‘Do people really just walk into the house and start tearing each other’s clothes off?’  No, that’s not how it is in real life.  There’s at least some conversation and foreplay.  At least, ‘Would you like a cup of coffee?’”

He added, “It’s not authentic to film authenticity.  Films are not authentic. Films are not real. People don’t talk like that in life. If you watch the best written shows, such as Aaron Sorkin’s The West Wing, all those people banter like they’re geniuses but it’s entertainment.  It’s authentic, but authentic to good writing or entertainment.” Reisman continued, “If the scenes were meant to be authentic, it’ll be too distracting from the story. That’s why I don’t show nudity in my movies – straight or gay.  It’s a distraction and, selfishly, it pulls audiences out of my story. I think it’s sexier for a woman (or man) to be clothed and revealing details through conversation. I keep it authentic to what I know about intimate scenes. It’s about the conversation before and after sex. I think that what goes on before and after is what I find most interesting, don’t you?”

Reisman’s blend of plot and character development is what helps to make As Long As I’m Famous an interesting portrayal of love in 1948. “If the story is interesting, then it has interesting characters.  I’m a big dialogue guy. I’m a playwright. For me it’s about the dialogue.  I stay out of my cinematographer’s way. On As Long As I’m Famous I had Ryan Brown a fantastic cinematographer.  I showed him a few films I like photographically for Famous, and let him do his thing.  He dealt with how the picture looked and I dealt with how it felt.  It’s why the movie is so stunning.”

As conversation shifted towards the movie’s love scenes, Reisman found a way to balance both natural sexiness and raw emotion that was very popular with audiences.  “The reason that Aaron [Fors, Sid] and Gavin [Adams, Monty]’s love scene has twenty-eight million hits on YouTube.  I believe the reason is because it’s sensual. These guys are very attractive, and you believe that they were into each other. In 47 seconds of this film, audiences saw all of the complexities of what this relationship means: betrayal – one loves more than the other and it depicts 1948. I was very careful doing this because a lot of those relationships existed in 1948 and no one talked about them. They protected their stars. If I were to sit down to write just a gay love scene, I would have failed. If I say down to write just a straight love scene, I would have failed. You have to write about people and the natural connection between them and that’s it.”

Reisman added, “That’s what’s going on in our country right now. What’s seeping out is the sludge from this current administration.  The bad in people…it’s coming out like oil. Thankfully, these demonstrations, and I’ve participated in two, are showing the shift in people towards more tolerance and understanding.  What I saw when I participated were groups of whites, middle class, upper class, Latinos, Filipinos, African Americans, gay, straight, families  with dogs – That is what America is!  The Alt Right better wake up and realize that this is America, and it’s always been that way.  The time for denying it, both in life and in the entertainment industry, is over.”

Be sure to click on the link below to watch Broadwood Media’s “As Long As I’m Famous”: