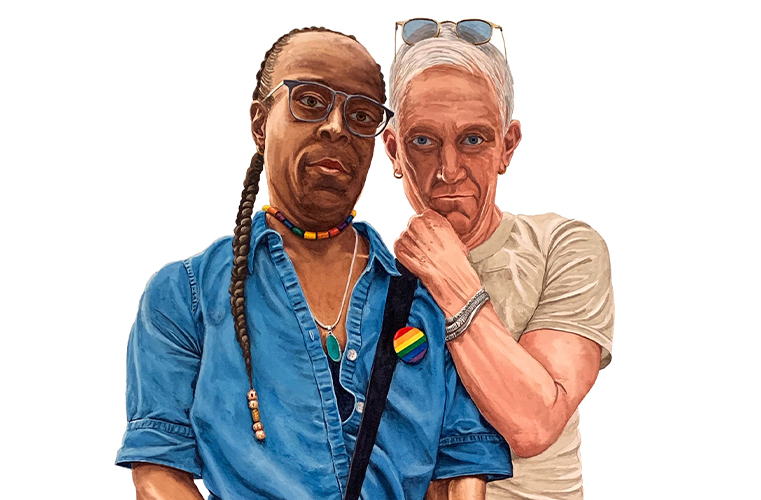 Scott Ponemone began capturing portraits of pairs in 2017 for his “2 by 2” watercolor series. Evidently, some would go on to feature masks. He discusses capturing America, choosing subjects, and why he’s really an ethnographer. 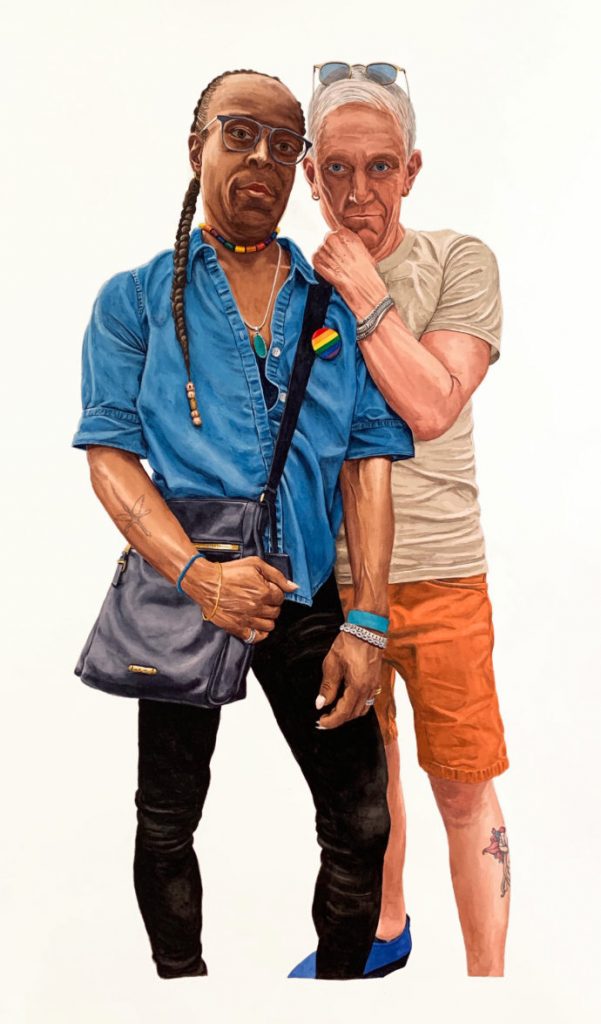 You typically approach strangers in public at the start of your portraits. What are your best ice breakers?

Scott: I’m very straight forward. I approach people with “can I ask you a favor? I’m an artist and I do watercolor portraits of couples.” I show them a finished painting on my phone or an 8 by 11 glossy if I have one with me. I assure them that I‘ll only need two or three shots and can photograph them right where they are. Then I hand agreeable couples my business card so they can request a copy of the photos. Once they model for me, I ask for their first names so I can use them as a title.

What qualifies as an interesting subject?

Scott: The couples need some idiosyncratic feature — maybe dress, maybe attitude, maybe distinct bond as a couple — that makes them stand out. I do observe couples a while before I approach them. I also look for a certain demographic if I feel my series is weak in some place.

Was there a demographic you felt was particularly underrepresented in your work?

Scott: I had trouble getting Spanish speaking folks to agree to be models. I attribute that to fears of ICE agents. Also, Asian couples tended to say no maybe from a certain cultural modesty.

Any favorite spots that continue to turn up interesting subjects?

Scott: I’ve relied too often on a year-round farmers market. The buyers are racially diverse but too many are academics or professional types. On the plus side, they tend to agree to model. I might return to Baltimore’s Inner Harbor, which still attracts out-of-towners — locals have learned to shun the place. Once museums open up, especially in D.C., I‘ll return to the galleries. Guards never bother me and museums tend to attract a certain amount of odd — maybe I should say distinct —  couples.

What were your experiences like working with members of the LGBTQ+ community?

Scott: I’ve only once gone to a club to look for LGBTQ’ers, and only convinced one couple, Agni and Eli, to pose for me. Best luck I had was to visit where marchers were assembling for a Pride parade. Oftentimes, members of the community think of their public selves as a performance, which makes for easy modeling.

Since you operated during a major election year, were you able to deduce political leanings from your portraits?

Scott: I felt bad that I never attended a Black Lives Matter rally last year but was leery of close-knit crowds. And right-wingers were a bit scarce in Baltimore to seek them out. The closest I ever got to the other side of the political spectrum was in 2019 when I roamed the streets outside the Baltimore Ravens stadium. None of what appeared to be good-old-boys would model for me. As soon as I said I was an artist, the alarm bells went off in their heads and they would grunt a no! Oddly enough, I did get models that day: two pairs of mothers and daughters to my surprise.

Will you be focusing more closely on capturing LGBTQ+ persons in upcoming works?

Scott: Because Key West is justly known as being LGBTQ+ friendly, I exhibited all eight paintings from the “2 by 2” series that clearly presented LGBTQ+ couples. But to date, I’ve done 60 paintings in the series. Those eight are less than 14% of the total. Then again, not all LGBTQ+ couples or pairs of friends advertise themselves as such by their appearances or actions. I’ve been partnered and married to the same guy for a total of 43 years, but we don’t necessarily present ourselves as gay — just old middle class white guys. That said, I probably will not focus on the LGBTQ+ in upcoming works.

Do you predict any radical changes to the ‘portrait’ segment of the art market post-pandemic?

Scott: Interesting question, but I’m not the best person to ask because I’m not so much a portraitist as an ethnographer — my B.A. in anthropology showing through. I do portraits of America, two at a time.

Doing portrait commissions would be problematic. I work best when the subjects don’t know they’re being observed. Then when they pose for me, I seek out the qualities of their ‘couple-ness’ that attracted me to them. Portrait seekers would be harder to observe candidly.

See his work at ScottPonemone.com

Interview has been condensed and edited for clarity