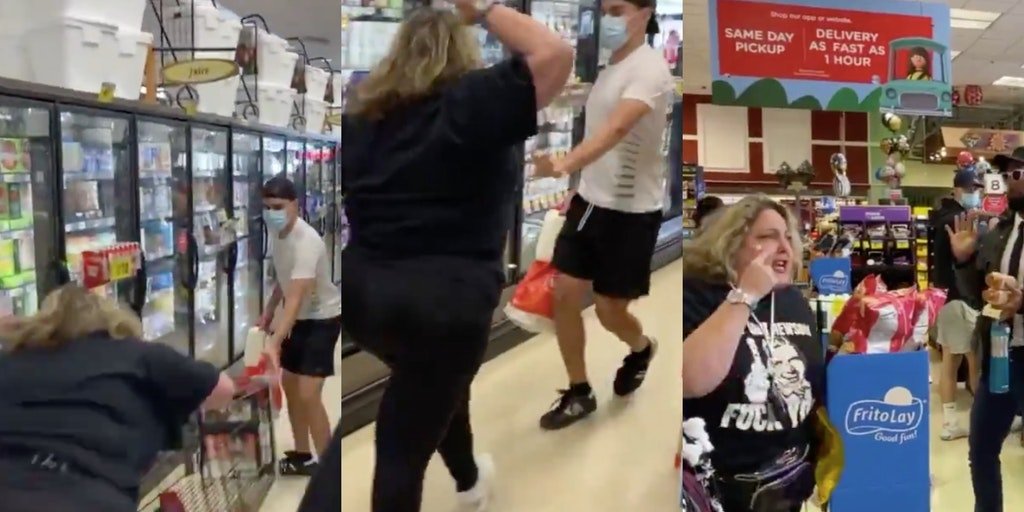 Los Angeles, CA – Proving once again that periods of stupidity do not end with a calendar year, a group of racist, pro-Trump bullies invaded a Los Angeles mall over the weekend, sewing violence in their wake. Video of the incident circulated on Twitter on Sunday evening January 3, courtesy of journalist Samuel Braslow. The footage shows a group of about 20 people wandering the Westfield Mall in Century City, terrorizing employees of the stores and customers alike. In one instance, a violent confrontation broke out in a Gelson’s grocery store between a shopper and an unmasked woman, who claimed that the man hit her. Cameras did not capture the initial incident, though they did record the woman trying to run down the man with a shopping cart, and another anti-mask hoodlum kicking the man as he tried to check out and exit the store. At the same time, two maskless women began shouting racially charged statements around the store, including “All Lives Matter” and slander against China. Another man referred to mask-wearing employees and customers as “mask Nazis.”

The rioters then progressed to other stores in the mall, including Bloomingdales, Steve Madden and the food court, harassing customers and chanting “no more masks.” The group also performed an acapella dance rendition of The Village People’s “Y.M.C.A.” (changing lyrics to M-A-G-A) presumably because Donald Trump played the song–without irony–at campaign rallies.

Police eventually arrived on the scene but did not arrest the rioters. Instead, they stood back and watched as the group continued to disobey mask mandates and harass other customers. That includes a moment where officers watched a mall shopper, a doctor, tell one of the maskless thugs that her mother is in the hospital dying of COVID-19. The man’s response: “People die. Your father’s not special.” The incident is just the latest in an ongoing series of disruptions by Trump supporters who continue to deny the seriousness of the COVID-19 pandemic. In Los Angeles, where the riot occurred, statistics report almost 36,000 new cases the same day of the incident. (Queerty – David Reddish at https://www.queerty.com/watch-wild-scene-erupts-la-mall-anti-mask-trumpers-spread-chaos-20210104?utm_source=Queerty+Subscribers&utm_campaign=bbe6de461f-20210105_Queerty_Newsletter&utm_medium=email&utm_term=0_221c27272a-bbe6de461f-431876119)