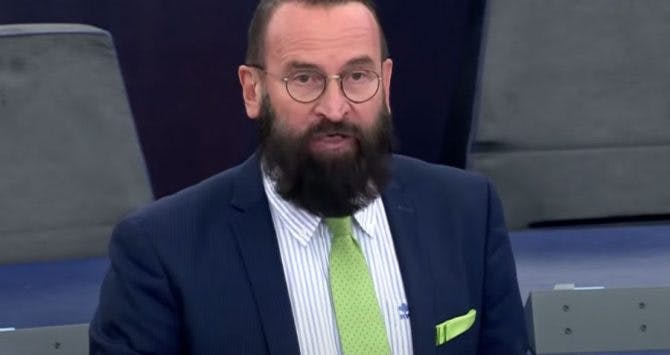 Brussels, Belgium – Queerty reports that József Szájer, 59, a Member of the European Parliament (MEP) for Hungary’s ruling, right-wing, Fidesz Party, was caught by police at what they described as a “gang bang”, or “legs in the air” party, above a bar in the city on a Friday evening. Police apprehended him allegedly fleeing through a window and trying to escape along guttering. Because of local COVID restrictions, gatherings of more than four people are prohibited. Around 20 men were caught at the party, and police also seized ecstasy pills. Local press report at least two other diplomats were present. Police fined each of the men €250 (approximately $300) for attending the event.

The Fidesz Party is led by Hungary’s Prime Minister, Viktor Orban. It is known for its conservative and anti-LGBTQ views. Earlier this month, Fidesz lawmakers drafted legislation to ban gay people from adopting children. It also recently voted to ban the legal recognition of trans people.

Szájer has been a leading figure in the party, helping to found it in 1988 and serving as its Vice President from 1996 until 2003. He was reportedly one of three of its politicians who helped to re-write the Hungarian constitution in 2011 to define “the institution of marriage as between a man and a woman.” On Sunday, Szájer surprised many by announcing his resignation from the European Parliament. He said at the time it was due to “increasing mental strain” and needing a “period of reflection.”

When news broke that he had been at the party, Szájer issued a statement and apologized for, “a personal failing” in attending what he described as a “house party” and ignoring COVID restrictions. Local media have alleged when stopped by cops, Szájer tried to use his status as an MEP to claim immunity from prosecution. Szájer has denied this. In his blog post he said: “After the police asked for my identity – since I did not have ID on me – I declared that I was a MEP. The police continued the process and finally issued an official verbal warning and transported me home.” “I deeply regret for violating the COVID restrictions, it was irresponsible on my part. I am ready to stand for the fine that occurs.” Szájer is married to a woman and they have a grown-up daughter: “I apologize to my family, to my colleagues, to my voters,” he continued. “I ask them to evaluate my misstep on the background of thirty years of devoted and hard work. The misstep is strictly personal, I am the only one who owes responsibility for it. I ask everyone not to extend it to my homeland, or to my political community.” (Queerty – David Hudson at https://www.queerty.com/anti-lgbtq-lawmaker-quits-cops-catch-fleeing-gay-orgy-20201202?utm_source=Queerty+Subscribers&utm_campaig)