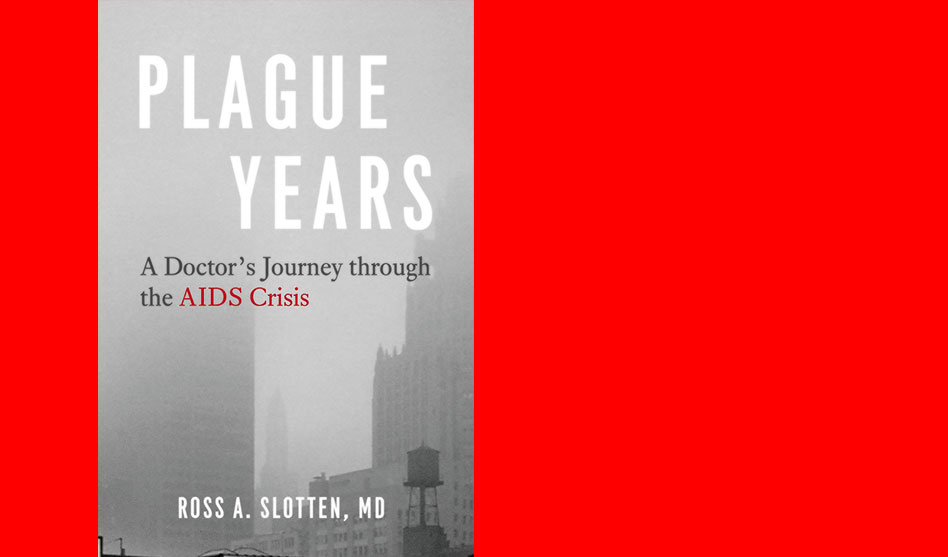 Chicago, IL – Cover your nose and mouth. Wash your hands with soap and water. Stay six feet away from strangers and those you think might be infected; better yet, stay at home. And that is how you crush a pandemic — more or less — although, as in the new book Plague Years by Ross A. Slotten MD, sometimes it’s not that easy. Plague Years: A Doctor’s Journey through the AIDS Crisis by Ross A. Slotten, MD (University of Chicago Press, 2020) $20; 214 pages.

It was not until Slotten saw his former lover, Art, that the reality hit him. He had not even considered that he would be at risk for AIDS, though he had been treating AIDS patients for several years by then. He knew the risks, of course, and had taken precautions. But Art was in his far past. There was a time when Slotten thought he was straight. That changed in college. And though he was desperate for love then, he was careful with his heart. He fell for Art, and believed he was in love. But Art slept around with countless men, and, one night, he broke Slotten’s heart for good. That was at the beginning of the AIDS crisis. It was a lifetime ago, back when Ronald Reagan all but ignored the disease, before treatment was available — before Art was dying. Art, whose illness forced Slotten to take an AIDS test.

In med school, Slotten had not intended to specialize in AIDS medicine, but as a gay man, how could he ignore those who came to him after he had opened his Chicago practice? How could he turn his back on them, as did the nurse who placed a gauze pad between her fingertips and a pulse, or the co-worker who felt relief at having avoided mouth-to-mouth resuscitation on a dying AIDS patient? On his rounds, there were times that the best Slotten could do was to give comfort or a hug or keep vigil. He tried to be truthful, always, but denial was a real thing — including denial for Art, who slept with the wrong man or men. This is a devastating book, made more so by Slotten’s viewpoint as both gay man and doctor, and by casual reminders of the things we did not know then and the things we know now. Plague Years is profane and blunt and nail-biting and heartbreaking and hopeful. And that pretty much covers it. (Dallas Voice – Terri Schlichenmeyer at https://dallasvoice.com/looking-back-at-a-plague/)