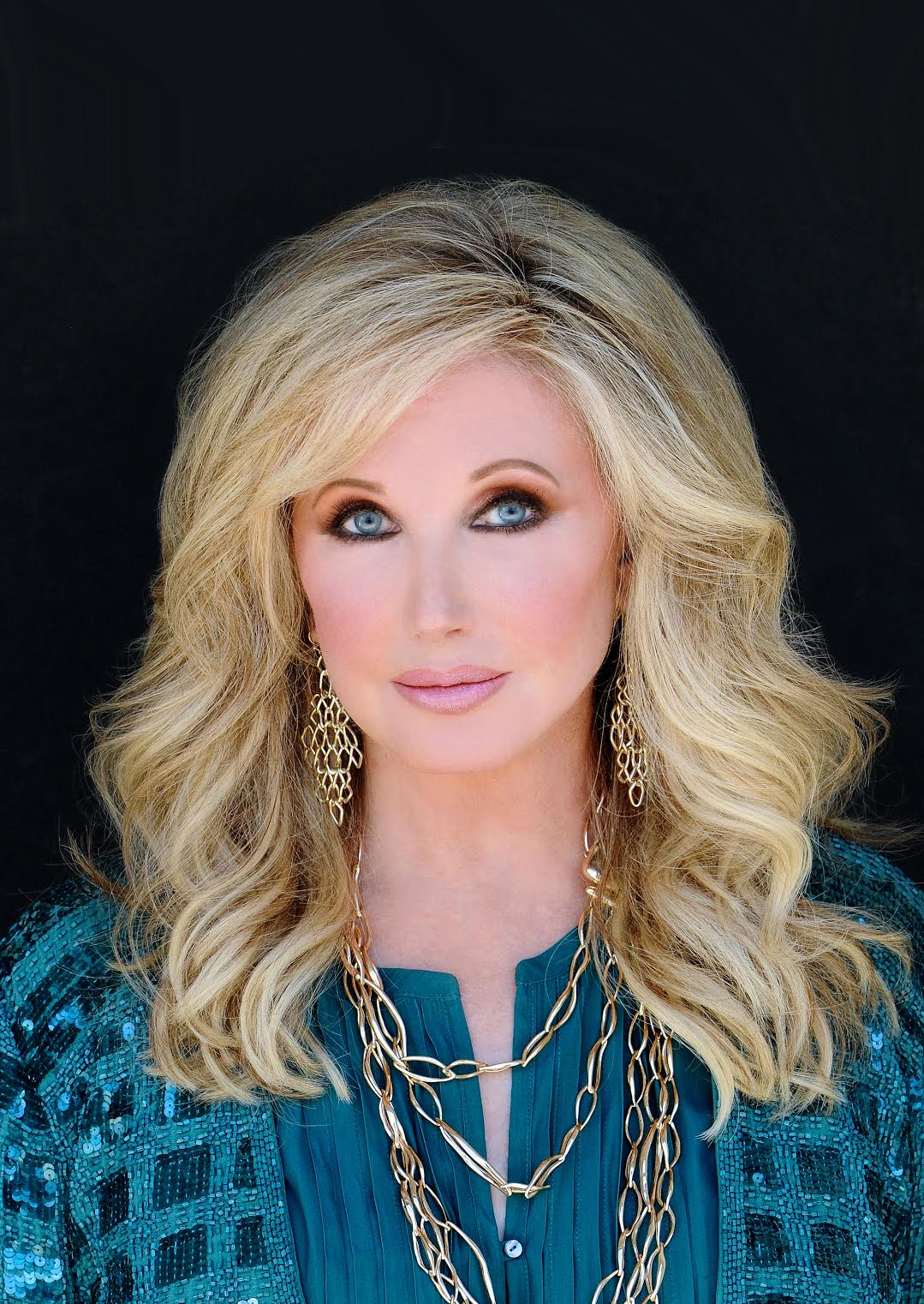 A fabulous woman once said, “I’m one of those people you can tell ‘no’ a million different ways, and I’ll spend the rest of my life trying to figure out some way to get you to say ‘yes.’ People have always underestimated me. I have great stamina, great tenacity.”

These words, once expressed by the iconic Morgan Fairchild, encapsulate the charisma of this legendary actress. From “Dallas” to “Flamingo Road” to “Paper Dolls” to “Falcon Crest,” Fairchild has always delighted audiences playing smart, manipulative women. The actress has once more stepped into the world of serialized storytelling, this time in the stilettos of Vivian King in Logo TV’s “Mélange.” The actress recently chat with Baltimore OUTloud to discuss her work on “Mélange,” how she came upon the project, and her work as an AIDS activist.

“Vivian is ruled by her pain and rage at having a husband she loved so madly leave her because he finally acknowledged he was gay, and the hurt that she has felt from that,” Fairchild explained. “I think all of her lashing out and everything is unfortunately ruled by her pain. You see that in life, sometimes, when people just can’t get past it.”

“Mélange’s” creator and executive producer, Tom D’Angora, reached out to Fairchild to be part of the show. “Tom is so sweet. He sent me the script and as soon as I read it, I thought, ‘Oh my God, I can do a lot with this.’ Characters and pain and lashing out are my forte,” Fairchild laughed, “Hell on wheels is my middle name!”

As an acclaimed actress of serialized dramas, Fairchild is happy to see the genre continue to intrigue audiences. “I like to call it ‘serialized storytelling,’” Fairchild explained. “It’s basically a very old form of storytelling. The story goes on with characters that you become more and more invested in. So, people like to [sometimes] call it ‘soap opera’ because of the daytime dramas back in the day, but really and truly that’s when the ongoing storytelling was sort of relegated to daytime. The stand-alone episodes were the primary form on nighttime television. However, with the advent of a lot of the shows in the 80s – like ‘Dallas,’ ‘Falcon Crest,’ ‘Paper Dolls,’ ‘Flamingo Road,’ ‘Knots Landing,’ and ‘Dynasty’ – it brought that format to nighttime. That format is really a very ancient form of storytelling, where the story just goes on and on and on. Shows today, like ‘Empire’ and ‘This is Us,’ are using that format of ongoing stories. One way to hook an audience is to get them really invested in what’s going on with the characters in the story.”

Fairchild’s proudest work, however, may be for what the beloved actress has done behind the scenes to help those struggling with AIDS. “Most people don’t know that I have all these different hobbies. One of my hobbies is learning about emerging viruses and epidemiology. So I’m always reading these different journals.” Fairchild went on to explain about how she first learned about an emerging virus in the US in the early 80s. “I had seen a really tiny article about 11 cluster cases of Kaposi’s sarcoma in New York, which is this very odd cancer that you don’t see much, but at that time you also saw it in elderly men of Mediterranean extraction. This article, however, said the men were all young. So, I thought, ‘That was odd,’ and I noted it. Then, I read there were about 13 cluster cases of Pneumocystis pneumonia in San Francisco. And again, this isn’t a pneumonia that your body can usually fight off. So that was very odd, and I took note of that. And then it came out that all of these were gay men, and then I knew something new was out there. So, I was just following every little article that looked like it could be somewhat related. I tried to warn all of my gay friends about it. Growing up in the theatre, I had a lot of gay friends.”

Fairchild went on to explain that she eventually went on to be Rock Hudson’s date to an event about six months before he started work on ‘Dynasty.’ “As soon as word started coming out that he wasn’t looking well, I knew immediately what it was.”

While working on ‘Falcon Crest,’ Fairchild received a call from Ted Koppel to be part of panel focused on AIDS. “By that time, it had a name,” Fairchild recounted. “I was happy to be part of it because I felt it was important to get the word out.” After impressing both Koppel, his colleagues and the doctor on his panel (“My research was more up-to-date than their doctors”), Fairchild went on to become the “go to” person for “Nightline” for AIDS.

“The first townhall they ever did was like five hours, with a bunch of congresspeople, doctors, and me, and I think Harvey Fierstein. I was also there for the unveiling for the first quilt. I testified before Congress to get money for AIDS research. I did a lot of work with Act Up and Larry Kramer.” Fairchild paused before adding, “It was so sad to see Larry pass this week.”

Fairchild went on to unveil the first AIDS veterans wing with Mayor Koch in New York City, as well as visited hospices. “I lost a lot of friends because people didn’t want to be around me,” Fairchild said. “Because I was visiting hospices and doing all this AIDS work, they didn’t want me around their kids. They didn’t want me eating off their plates. I lost work because of it, and I was definitely controversial. I was sticking my neck out, but it was the best thing I ever did.”

“I remember one of the West Coast publishers of one of the big weeklies in Los Angeles called me up when Rock was still alive and said, ‘We want to do a “Hollywood fights AIDS” article and we want to do a big celebrity picture. Would you do it?’ And I said, ‘Of course.’ Well he called me back a couple of weeks later and he said, ‘Thank you so much.’ And I said, ‘For what?’ And he said, ‘Well everybody turned us down until you said ‘Yes’. And, then, you became our linchpin to get everybody on board.’” Fairchild added, “That became kind of what I saw my position to be in the 80s with AIDS. I was the one who had the knowledge. I was the only famous face they had that could go on and try to take the stigma off of it. I was willing to take the hits, so I could make it safe for other people to be out there behind me.”

Fairchild went on to recount her work with former Surgeon General Dr. C. Everett Koop and Dr. Anthony Fauci. “There was a lot of work to be done. A lot of fear to be reckoned with. And a lot of money to be raised. AIDS came along and both of these men stepped up. The world owes them both a huge favor. America owes them both a huge favor. Koop and Fauci fought that epidemic tooth-and-nail and America and the gay community should know that these are the guys that stood up for them 35 years ago. Koop has passed on now, but Fauci is still there fighting this COVID thing. Anything that Dr. Fauci says you can take to the bank! I’ve seen that guy in action. He is a great guy and a great doctor.”

Fairchild continued, “I remember one time, I was there for the unveiling of the AIDS quilt. I was up on stage and I looked out onto the big audience. I could see people starting to part in every direction, and then I could see why. There was this gentleman coming forward, but he had Kaposi’s sarcoma – for those readers who don’t know, it looks like you have leeches all over your face. They are purple and raised, and he was covered with it. He came up to me sort of below, while I was up on the stage, and he said, ‘Would you give me a hug?’ And I said, ‘Of course.’ I leaned over and I gave him a hug and he started crying. He said, ‘I just want you to know I am a dead man, and I love you.’” Fairchild’s voice softening, “That’s what the 80s was for me.”

Fairchild explained that it was those moments that compelled her to forge on. “Life presents you with challenges, and I’m a big believer in karma. And I believe that how you handle those challenges, whether you rise to the occasion, is important. And it’s why you’re put on this earth to go through this. And so, I can look back at that time with no regret, because I know that I did everything I could to try and save lives and to educate people to get rid of the stigma. I spent the 80s explaining to people that it’s not a gay disease. It just happened to get introduced to America through the gay community. When I was testifying before Congress, one congressperson said, ‘Well Ms. Fairchild, how many of my straight constituents are ever going to be affected by this?’ And I just looked and at him and I said, ‘Sir, I’ve got to explain to you that this is a disease. It doesn’t care about your constituents’ race or gender, or your district’s line.”

Fairchild concluded, “At one point I knew I was losing work for it because I was hearing rumors. It was a hard time, but you know, I knew I would lose work. I, obviously, was losing friends. But it was the best thing I ever did with my damn life. I helped educate and I know it helped save lives, and that is much more important on my tombstone than some other film credit I might have had.”

Let it be known that Morgan Fairchild’s legacy lies deeper than the roles of an iconic vixen. Fairchild’s true character lies within her intellectually, brilliant mind and boundless, loving heart.