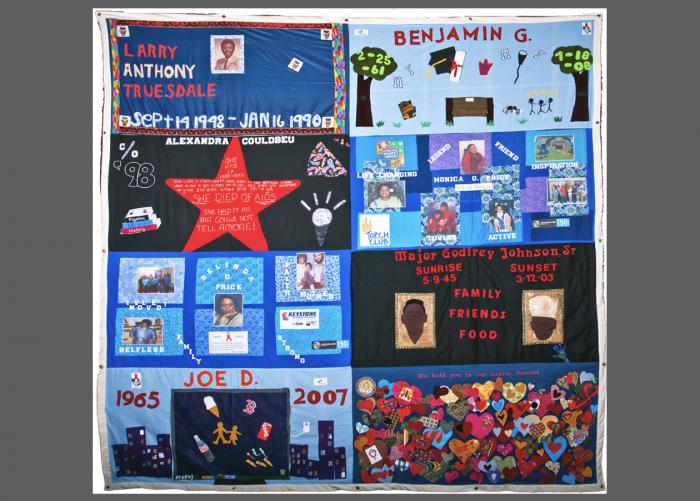 San Francisco, CA – During Black History Month, the National AIDS Memorial honors Black lives lost to AIDS with a specially curated selection of 56 blocks of the AIDS Memorial Quilt. The exhibition uses the beauty and power of the Quilt to bring to light stories of the countless men, women, and children who have died, and the impact AIDS has had on Black Americans. Partners for the Black History Month AIDS Memorial Quilt Virtual Exhibition include the Black AIDS Institute, Gilead Sciences, and Vivent Health, national leaders in the fight against AIDS. “This virtual exhibition shares stories of hope, healing, and remembrance to honor Black lives lost to AIDS,” said John Cunningham, executive director of the National AIDS Memorial. “Our hope is that it helps raise greater awareness about the ongoing struggle with HIV and the impact systemic barriers have to positive health outcomes, particularly among the Black community.”

In the 40 years since the first cases of AIDS were reported, Black Americans and communities of color have been disproportionately impacted by AIDS. By 1993, HIV was the leading cause of death for Black men between the ages 25 and 44, and by 2004, HIV became the leading cause of death for Black women in the same age group. In 2018, Black Americans made up 42% of the nearly 38,000 new HIV diagnoses in the US, with half of those living in southern states. The Quilt is a powerful tool to reach these communities through its stories of resilience, healing, hope, and remembrance represented in each panel.

“Today, Black Americans face the highest impact of HIV/AIDS compared to all other races and ethnicities. This highlights the need to center Black and LGBTQ people in the fight to end the epidemic,” said Raniyah Copeland, president and CEO of the Black AIDS Institute. “By sharing these powerful stories from the Quilt, we can continue to advocate for Black people living with HIV, defy stigma, and create awareness around prevention and treatment options available today that can end HIV in Black communities over the next decade.” In 2013, as part of ongoing awareness and educational efforts, a special Quilt program, “Call My Name,” was created to draw attention to HIV/AIDS in the Black community and the public health crisis that still exists today. The program aims to create a greater number of Quilt panels that reflect the impact of HIV/AIDS within the Black community and the effect stigma and prejudice have on increased infection rates. Courtesy of the National AIDS Memorial (Seattle Gay News – at http://www.sgn.org/sgnnews49_06/page10.cfm)