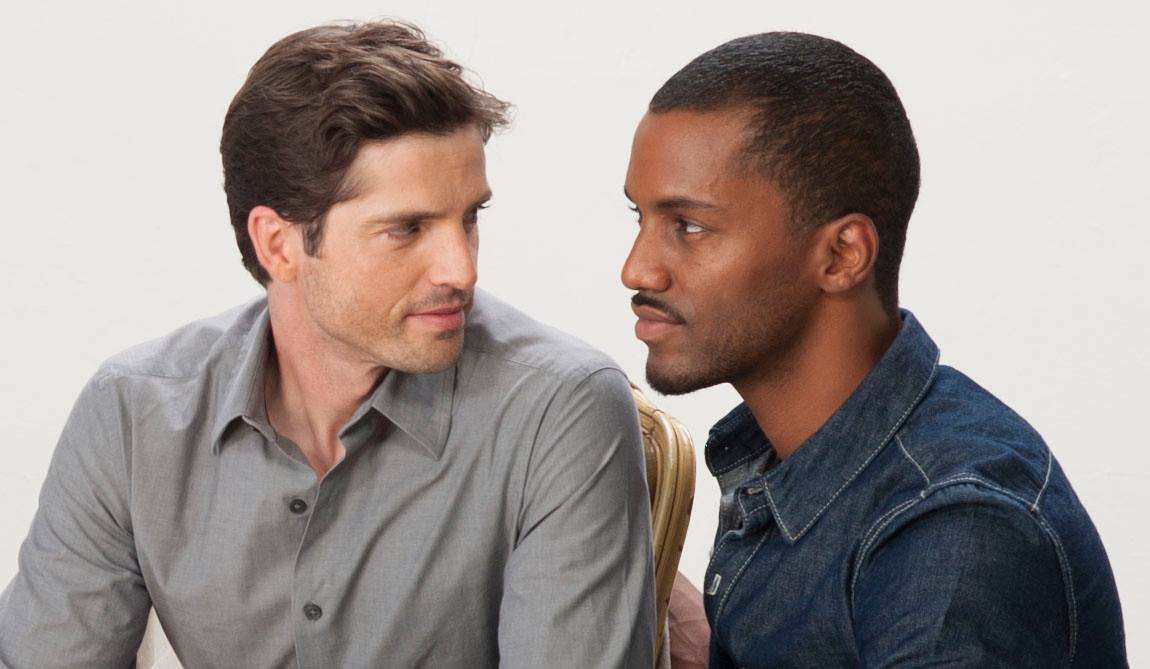 In the movie From Zero to I Love You, audiences find themselves on a passionate rollercoaster ride as the lives of Jack Dickinson (Scott Bailey, Guiding Light, Prayers for Bobby) and Pete Logsdon (Darryl Stephens, Noah’s Arc, Boy Culture) intertwine. The captivating LGBTQ film from writer and director Doug Spearman showcases an exceptionally talented cast. Devastatingly handsome actor and LGBTQ ally, Scott Bailey, recently discussed how he prepared for this role, what drew him to this film, and what he is most proud of with his performance. 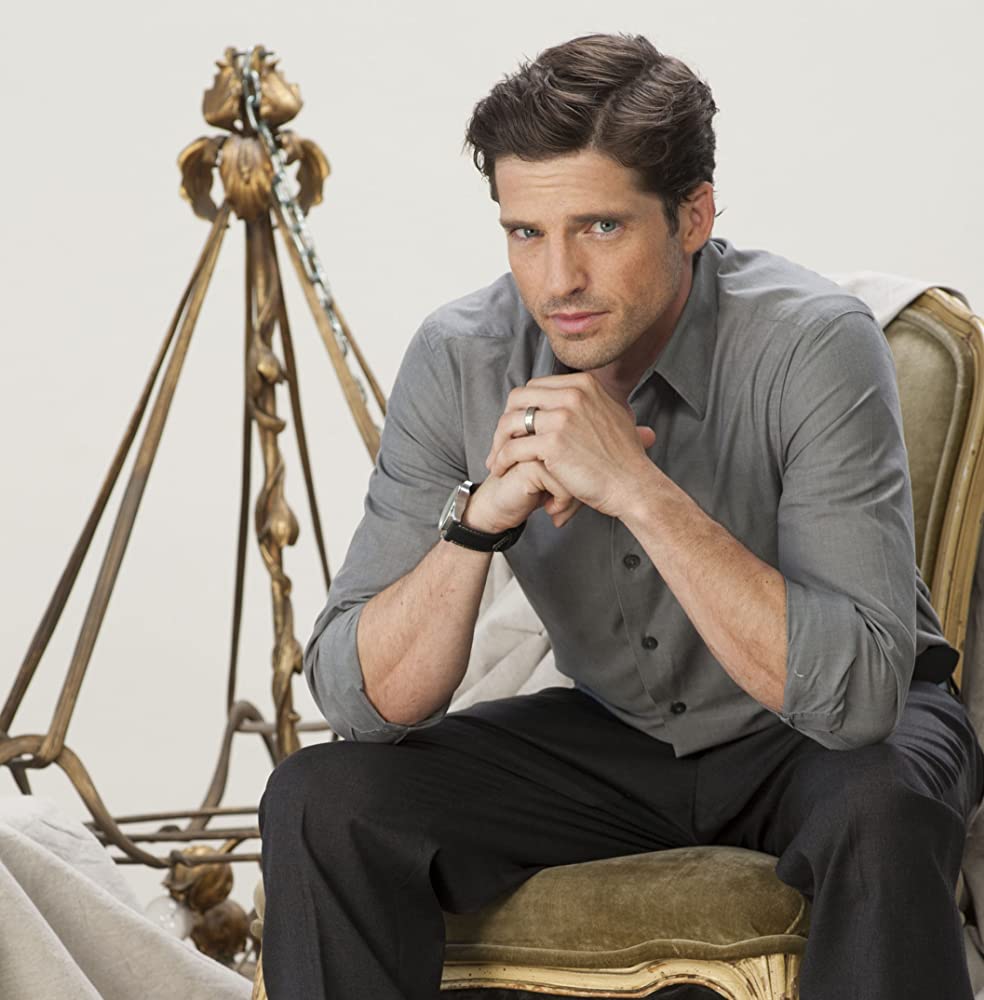 Bailey first learned about this film when he was contacted for the role of ‘Jack’ by filmmaker Doug Spearman.  “I was really drawn to his very detailed, layered characters and story,” began Bailey.  “I thought it was an important story that I had also never seen before. I had known, talked to and experienced the lives of many ‘Jacks,’ but I had never really seen an honest portrayal of their story, or something that they could watch.”

In the film, Bailey’s character Jack is married with a successful wife and two daughters, living in a big house on Philadelphia’s Main Line.  The image he projects to those around him masks a secret that has been eating him alive for most of his life. Like many men and women, Jack choose the path of ‘normalcy’ to the American Dream rather than face the fact that he’s attracted to men. He tries as hard as he can to be the faithful husband and good father until one night, he can’t do it anymore. A chance encounter at a party leads Jack straight to Pete who will change his life forever and upend everything Jack has built.

Bailey’s acting prowess has showcased the performer’s ability to deliver remarkable performances throughout the course of his career.  Many in the LGBTQ community may remember Bailey for his role as David in the film Prayers for Bobby. He is also known for a plethora of other roles, including Guiding Light, Saints & Sinners, as well as being featured as the half-man, half horse centaur in the Old Spice commercials. The father of two is also married to actress Adrienne Frantz from The Young and the Restless fame.

“[From Zero to I Love You] resonated with me the same way Prayers for Bobby did.  I saw both films as very meaningful stories, not just as a paycheck or something to do.  This [film] was something very important, and I just honestly hoped that it was told really well so that audiences could see it.  After reading [the script], I knew the characters were amazing and what a gift it would be for any actor to play any of them.” Bailey reached out to Spearman to express his interest in the film.  “I wrote this impassioned letter to Doug and I said, ‘I would be honored to play this character and do anything I can to help this story move forward.’  I said, ‘I’m the guy.  I will be there 100 percent.  I’m all in.  And, if I’m not who you’re looking for, I will help you in any way, shape or form to tell this story.’  So, I basically asked for this role, and I really wanted it. I wanted to be a part of this film, and thankfully it worked out.”

Bailey did a lot in order to research and prepare for this role.  “I had many deep, revealing, cathartic conversations and discussions with the ‘Jacks’ in my life and the ‘Jacks’ that I know.  You can’t not be affected and inspired or moved by these deep conversations with what these ‘Jacks’ have actually gone through in many ways.  What I really liked about this film was that the experiences are very tragic and moving, but it doesn’t always have to have a bad ending.  I liked that this movie could show some ‘Jacks’ and a story that many people may relate to that they may never have seen on film.  That there is a light at the end of the tunnel, where you can live your best life, be your authentic true self and it can have a happy ending.”

Bailey went on to discuss his on-screen chemistry with co-star Darryl Stephens.  “Darryl is a pro! I’ll tell you this about working with Darryl.  This film is a love story and my character had to be head over heels in love with Darryl’s character.  I’ve got to tell you; it wasn’t hard to make that real. He is a genuinely nice, sensitive, thoughtful human being.  It wasn’t hard as an actor to find ways to fall in love with that character/person, or however you mix your imagination with real life.  He’s a professional and it looks effortless.”  Bailey added, “Both Doug [Spearman] and Darryl both have that.  They know so well how to do what they do, what story they’re telling and what the beats are in the scenes that they do it so effortlessly.”

Both Bailey and Stephens put in the work behind the scenes in order to build on that initial chemistry for viewers to see onscreen.  “We first did a few table-reads to allow people to flesh out the story.  Then we had quite a few rehearsals to get comfortable with each other.   Whether it’s a normal scene or an intimate scene with two men – you rehearse it, – you talk about it, – you learn to get comfortable as people.  Actors can do things like going on a date as your character.  There are certain things you can do to make things more comfortable and real.  At the end of the day we’re using our imaginations, but it’s also easier if you prepare.  There’s a comfortability if you’re playing a scene and the guys are on their first date, and you have actually taken the time as actors to go out on a ‘date’ together.  That’s the work you don’t always see behind the scenes but, however, there are times you can see that work come across onscreen.  There was a comradery, with this cast, that we were working together to get this project done and get it done right.”

Upon reflecting on his final product, Bailey is very proud of his involvement in this film.  “This film was a labor of love and a passion project for just about everybody involved.  I am most proud of the artistry and the work in it.  From an actor’s point of view, the performances embodied such great work from everyone in the film.  And, not to toot my own horn, I’m very proud of the work I did, too.” Bailey continued, “As an actor you’re not always proud of your work.  I’ve done many projects in the past, and in comparison, I honestly can say that I’m proudest of my work in this film.  That’s mostly due to [filmmaker] Doug Spearman because he laid it all out there. He wrote this great story and had all these levels to these characters.”

Bailey concluded, “For years, I would be happy for anyone to watch this film.  I’d be happy to have my children watch it someday.  ‘I want you to watch this love story that Daddy did when you were born.’  I’m very proud of that story being out there. And I’m proud that we did it!”