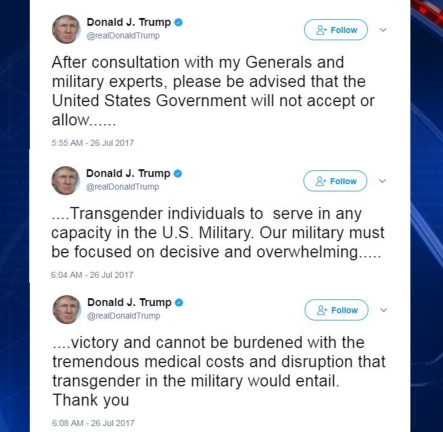 “Ask yourself who is really the friend of women and the LGBT community, Donald Trump with actions or Hillary Clinton with her words? I will tell you who the better friend is, and someday I believe that will be proven out, big-league.” – Donald Trump, June 2016

What a difference 13 shocking and hapless months can make. Thirteen months ago, Donald Trump was on the campaign trail touting himself as a friend to the LGBTQ community, pledging to “fight for you” more bigly than Hillary Rodham Clinton ever could. Pledging to fight against those who would threaten our freedom and beliefs.

July 2017: We’ve been sucked back, despite our energetic protests, into a sickening time warp, led by an adminstration rife with homphobic appointees, which chooses to throw keg parties after anti-health care wins amid an all-white sea of supporters in the background at the Rose Garden, publish pictures of Trump with his White House interns and not a black or brown (or out-gay) young face in the crowd, strap the (mostly white) women-of-the-administration into a dresses-only apparel code – officially, an administration bent on recreating a time when black, brown, and gay people were not seen and our voices were not heard. If we are not seen, the reasoning of this administration seems to roll, we do not exist and therefore have no worth.

July 26th, 2017: Black Wednesday. Donald Trump showed what kind of friend he is to LGBT people – doing it big-league, indeed. Each and every day, an administration shows where its priorities lie, actively choosing among all slew of available choices where to spend its time, attention, resources, and care. And Trump’s is choosing to use the awesome powers of the federal government to imperil civil rights for gay and transgender people.

Black Wednesday began with the shocking morning tweet from Trump announcing an across-the-board ban on transgender people serving in the military services, which came as a complete surprise to Pentagon leaders and reversed a year-old Obama administration policy.

Next came a move by Trump’s Justice Department, which intervened in a private employment lawsuit, Zarda v. Altitude Express, and argued that it is not illegal to fire an employee based on his or her sexual orientation under federal law – that the ban on sex discrimination in the Civil Rights Act of 1964 does not protect workers on the basis of their sexual orientation.

Completing the trifecta, the White House issued a statement that afternoon that Sam Brownback, the governor of Kansas and a vocal opponent of gay rights, was being nominated to serve as ambassador at large for international religious freedom. This is the same Sam Brownback who issued an executive order in 2015 prohibiting state government from taking action against clergy members or religious organizations that deny services to couples based on religious beliefs. His order also protected religious organizations that provide state adoption from having to place children with gay couples if that conflicts with their beliefs. “We have a duty to govern and to govern in accordance with the Constitution as it has been determined by the Supreme Court decision,” Brownback said in a statement at the time. “We also recognize that religious liberty is at the heart of who we are as Kansans and Americans, and should be protected.”

There are some positive signs. It was heartening when President Trump tweeted his move against transgender people in the military that he was criticized by a bipartisan number of powerful people in Congress. And the military was caught off guard because Trump didn’t even think to consider informing them before tweeting, and they had said there will be no change in US military policy for now.

Do those who support Trump’s agenda ever stop to realize what it would be like to face the fears that LBGT citizens face every day: fear of losing their jobs or their homes, fears of physical violence at any time of the day or night based solely on who they are attracted to and who they choose to love? The process of dehumanizing gay fellow citizens as “unnatural” and thus less deserving of basic human rights and decency of feeling abounds in the White House of this country which gives fire to the prejudiced. The spectacle of deeply-homophobic Pence looms ever larger in the background as Trump continues to self-implode. Having lost the cultural war, the members of this administration, many of whom built their careers on enacting anti-gay policies, are now using the power of the federal government to deny our humanity and our rights. We cannot stop fighting. Resist, rest, repeat. Resist, rest, repeat. We have to keep coming at them. We are all better than this.