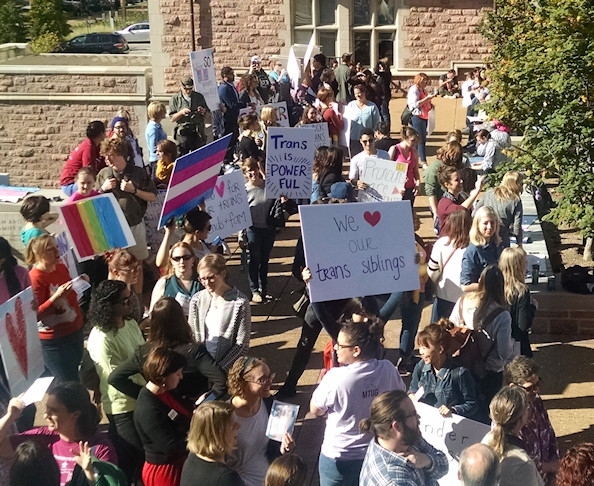 In early November the third annual Transgender Spectrum Conference was held at Washington University in St. Louis. The conference was a gathering of gender diversity– cis and trans, non-binary, gender-queer, educators, health professionals, families and children. It was a celebration of our movement – the acceptance of transgender people and their allies and an uplifting show of awareness and support for transgender individuals of all ages.

Amidst the hope and optimism in the days leading up to the conference, planners received word that the Westboro Baptist Church intended to protest and to spread their message of hate and bigotry. It was a dark cloud looming over what was hoped to be a bright and enthusiastic conference.

Planners were assured that the Westboro protesters would be restricted from the conference area and cordoned off in a separate space. There was a genuine fear that transgender attendees to the conference would feel intimidated – it is difficult enough for many in our community to step out of the door. Confronting a group of haters at a conference designed to be safe and welcoming was a large concern for many.

The night before the conference word spread across the Wash U. campus that the WBC people were coming. A sense of outrage began to grow as students, even those not connected with the conference, called upon one another through social media for a strong and powerful response.

At noon on the first day an outpouring of the Washington University student body came out with signs and chants and messages of love and acceptance for all diversity, especially for transgender and gender expansive people who had come together for the conference. They were loud, they were many, and they were a powerful show of support and rejection of fear and hate and bigotry. The Westboro people were kept at a distance, but they undoubtedly saw and heard that their message was not welcome nor would their hatred be tolerated.

Later, as the conference came to an end, it was noted what had actually occurred. Without the Westboro people coming, the conference would have mostly gone unnoticed. There would have been a quiet gathering at a welcoming and polite venue. But with the arrival of the Westboro people, a call to action had erupted. The haters had unwittingly unleashed a massive show of support for the very same people they had come to denigrate. Conference attendees left with a sense of hope and pride and a feeling of being loved and valued in spite of Westboro… three days later, Donald Trump was elected president.

The Trump victory has been much like the show of hatred seen in St. Louis. In our own struggle for equality and justice, especially after the gains achieved in recent years, we have become complacent and restrained. Trump, like the Westboro people, is our wake-up call to renewed action. Amidst the appeals to heal the wounds of an especially fractious election (easily put forward by those who enjoy privilege), there is strength in the message of no compromise on hatred, no compromise on intolerance and bigotry, and absolutely no compromise with the injustice around us.

Our mission and our calling have suddenly become shockingly clear.

Laura Anderson is an educator, author, researcher, parent, and granddad. Her years teaching in public school classrooms as male provided the foundation for her more recent role educating future teachers. Living female for the past decade, she has come to appreciate the privileges she once held– both male and cisgender– privileges now replaced with the fulfillment of living as her true self.